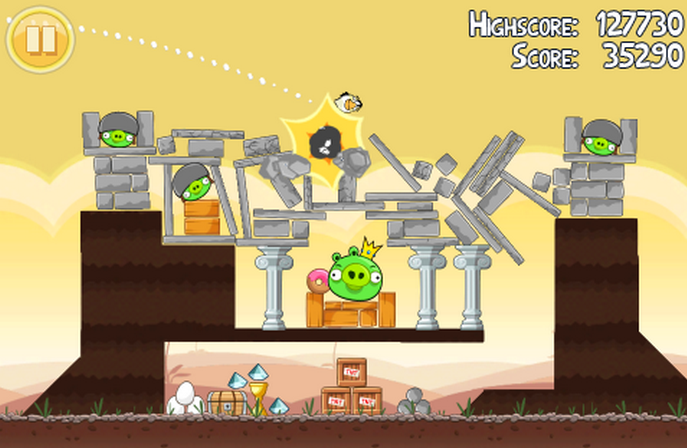 Microsoft has confirmed that Angry Birds, among other popular applications, will be coming to the Windows Phone 7 platform on April 6th, 2011.

Angry Birds, along with five other games, will be arriving on the platform as part of a spring lineup designed to bring high-profile titles to the small, but growing Windows Phone 7 marketplace.

The remaining five games are: Doodle Jump, Plants vs Zombies, Hydro Thunder Go, Sonic the Hedgehog 4 Episode I, and geoDefense. As a huge geoDefense fan, the version on iOS, I am more than excited.

Over the past six months, Angry Birds has become so popular that it has an almost cult-like following. Having the game, along with the other titles, come to the platform will surely help people on the fence in regards to switching fall over into the WP7 camp.

There has been something of a history between Angry Birds and Microsoft, with the Angry Birds developer blaming the slow move of the game the platform on Microsoft’s lawyers. Microsoft also poked the eyes of the developer of Angry Birds when it suggested, incorrectly at the time, that Angry Birds was en route to the new mobile line.

All that has passed. The game is coming, and it will be live on April 6th. Ready your slingshots.

We just got word from Microsoft that some of the dates in this post are off. The information flying around was just slightly wrong. We’ll let Microsoft set it straight:

To clarify, the Must Have Games program will be launching late this spring with a new title each week including, “Angry Birds,” PopCap’s “Plants vs Zombies,” “Hydro Thunder Go,” “Sonic the Hedgehog 4 Episode I,” “geoDefense” and “Doodle Jump.” We do not have a specific date to share at this time but we will follow-up when we do.

And there you have it.

Read next: CNN comes to Android with a new, dedicated tablet app