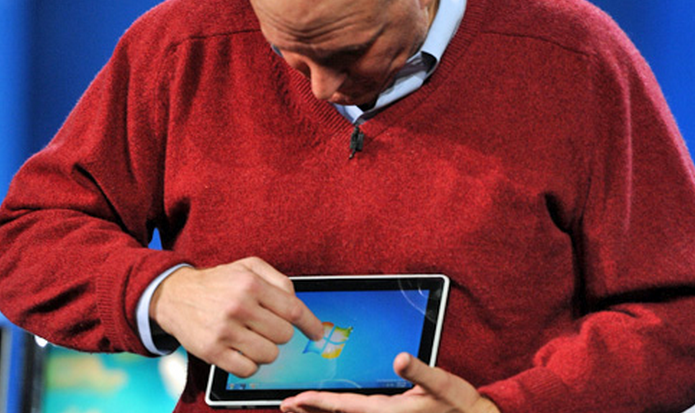 Sure, on paper Microsoft is not worried about the iPad, but behind the curtain the man pulling the levers has two eyes fixed on Apple’s slate.

Newly leaked PowerPoint slides that Microsoft has sent out to its partners are designed to help them wrap their heads around the iPad at the enterprise level. Collectively, the presentation presents the company’s viewpoints of the iPad’s strengths and weaknesses.

The slides constitute a ‘call to arms’ to help vendors fend off the iPad, and to keep selling Windows devices across all form factors.

We combed through the slides themselves and have extracted what we found to be the most interesting and illuminating quotes and points. To help you along the way, know that Microsoft is pushing tablets that run Windows 7 as their answer to the iPad, not their new mobile OS, WP7.

Our comments on that idea notwithstanding, Microsoft’s plan does fit the enterprise better than the consumer market; the enterprise has security and control requirements that you and I do not. Let’s get into it:

Microsoft makes a general claim about the iPad that it is “optimized for consumption of data, [and is] poor for data creation.” The Redmond giant goes on to elaborate the point by claiming that the iPad has “very limited productivity when offline.” Given its point about creation/consumption, that rings true. You can’t consume information easy offline

Further along, Microsoft points out that there is no usable file structure on the iPad, creating potential problems for the enterprise customer. We can’t judge this one very effectively, so we will leave it to you to decide if Microsoft has an argument.

Microsoft does have praise for the iPad. In blunt terms the company says that the slate has both a “long battery life” and an “intuitive interface.” Microsoft even goes as far to say that the iPad’s “form factor” is driving its commercial appeal.

Microsoft’s strongest criticisms of the iPad for the world of enterprise, as compared to the few Windows 7 based tablets out there, target its security situation and integration into other products.

It is fair to state that Apple did not design the device for the enterprise, but Microsoft is hoping that very limited Exchange, Sharepoint, and Office support will force many potential iPad purchasers to step back and look for a slate that will better fit their current set of software.

Microsoft continues, stating that the iPad lacks “Enterprise Patch OS management tools,” and has no “Enterprise Remote Device Management.” Companies using the iPad will be reliant on “Apple and [the] Carrier Network,” a level of loss of control that they may find to be unpalatable.

To come to a conclusion, while Microsoft is discussing the enterprise market its comments do have a certain ring. However the best Microsoft gripes about the iPad only pertain to enterprise situations, not to regular consumer use. Microsoft has no answer for the consumer demand for the iPad.

That is in fact a root problem for Microsoft. As they correctly note, “[the] end user is driving the adoption within the organization.” In other words, people are buying iPads, loving them, and then pushing them at work. Can Microsoft keep the iPad out of its enterprise realm?

Read next: Fresh screenshots leak from the Internet Explorer 9 RC