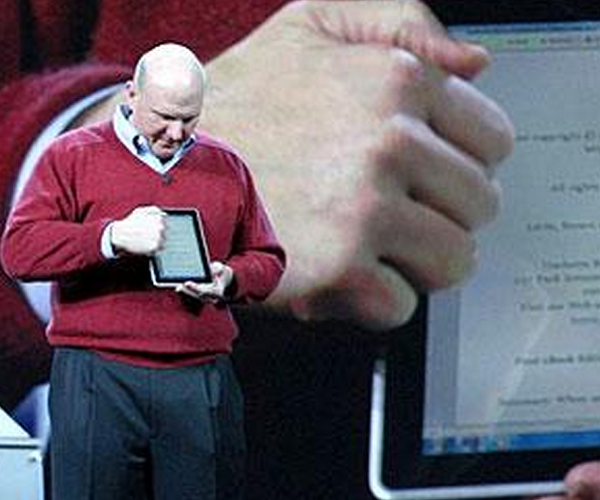 I have to admit that I am what most people call a ‘Microsoft fanboy.’ It’s something that I take a bit of flak for, but not a branding that I mind. Everyone has an opinion, I just usually end up agreeing with Redmond.

Not on tablets. Microsoft is walking the exact wrong route with tablet and slate computers, so much so that I have to question their judgement. It would be one thing if the company had taken a single misstep, but Redmond had been taking the wrong approach for a decade now.

Ten solid years of the repeating the same mistake is a rather impressive, if sad, track record. What exactly is the problem with the Microsoft approach to slate and tablet (touch), handheld and lap-sized computing? They want it to run Windows, and that will never work. To quote myself from June:

This is the exact same problem that the Origami/UMPC project had: a full Windows install on a small screen that you are supposed to touch does not work. It will never work.

With UMPCs Microsoft did put together an interesting touch package, a dashboard if you will, that was designed to be poked and prodded. It was a step in the right direction, but the damn devices were still designed to run Windows. They dropped like a rock. Microsoft is set to announce another set of tablets this coming CES that suffer from similar core design flaws. It’s enough to make you wince.

It doesn’t have to be this way.

Microsoft has two already built tools, that if they tweaked could be combined into a rather compelling tablet experience that I would like to buy. Fanboy or not, I want Microsoft to succeed in the tablet wars; I feel somewhat guilty giving Apple hell all day then cuddling with my iPad at night.

My suggestion to Microsoft is this: fuse Windows Phone 7’s operating system with Office Live for a marriage of convenience, ease of use, and productivity.

Everyone loves Windows Phone 7’s UI because it is based (partly) on Zune’s, which is universally acclaimed. It would fit wonderfully on a tablet. Office Live is an excellent, albeit stripped down, version of Office that lives in the cloud and is a delight to use. Microsoft wants their tablets to be suitable for businessmen and women? Then the company could meld Office Live even deeper than Office currently is into WP7 for an excellent slate productivity experience.

Then all Redmond has to do is expand the WP7 tile layout to fit a tablet, design a bigger soft keyboard, and drop it on a 9 inch device. I would buy one tomorrow.

In their race to rule the enterprise everywhere (including mobile), Microsoft is too focused on business use-cases that happen in the office consistently, but almost never occur while workers are mobile. Why keep chasing a scenario that doesn’t exist? Generally speaking, on the bus people are not going to be writing reports. They may read reports, but that is a different game altogether. Mobile tablets are slightly more consumer in nature, by their intrinsic use alone.

I want my WP7/Office Live tablet, and I want it now. Sound off in the comments if you would pick one up.

Read next: Looking back at two years of Twitter, what's changed?