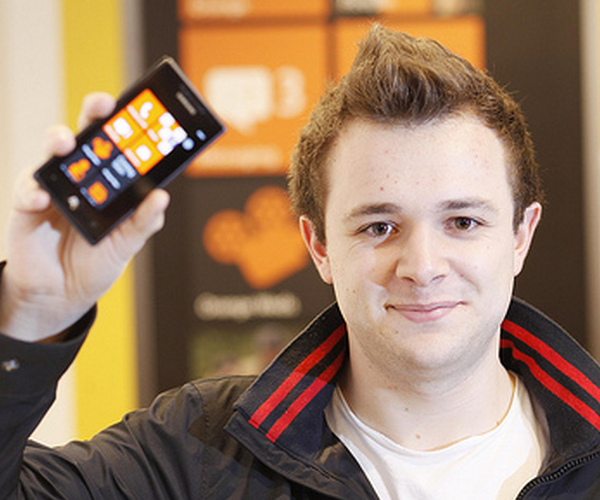 It may not be up for sale in the United States quite yet, but with its international launch Windows Phone 7 is making serious waves. Looking into the tweet flow around its name and other analytics the data is clear: Windows Phone 7 has hit a consumer nerve.

Windows Phone 7 (WP7) is something of a last ditch effort from Microsoft to get back into the mobile game that it fell so far behind in during the Windows Mobile 6.x days. After the humiliating defeat of the Kin, Microsoft had one last shot. The company appears to have made good that last opportunity.

If you track the search traffic around WP7, there is a clear trend that delineates explosive interest in the device around the world. For starters, take a look at the combined search volume graph:

There are several important things to note in this graph. Starting with the obvious, searches have skyrocketed around the phone line, showing that at a minimum people have heard of the gadgets and want more information. For reference, that first bump was the first batch of announcements concerning the forthcoming phones. Second, note the strength of searches for the phones for nearly the entire year, coming in at perhaps one third of the introduction’s level, but continuing without halt. Thirdly, there is a decided upward slope in the graph that leads up the the launch day, where the line goes nonlinear.

What can we make of this? If you compare the news graph (the lower chart) to the search line you can see that news volume does impact search traffic, which should hardly be surprising, what should catch your eye is the lack of news in the middle of the year (there was little to write about), and how despite that the search volume (for a rather specific term, this is not a fluke) remained strong. In other words, people were hearing about the phones from friends and other non-news sources and then doing research into them with little to no media prodding; people liked what they were seeing.

Google Trends has more useful data for us to parse, we have a breakdown of country search volume data. Let’s list out the top 5:

That the US ranks fourth should not be too surprising as the phone has yet to launch here. What should be noted in that list is the diversity of countries represented, showing global interest in phones during their worldwide launch.

People are more than searching for the phones however, they are talking about them. If you run a Twitter search for ‘Windows Phone 7,” “#WP7,” or “WP7” (here, here, and here) the conversation will pour onto your screen; leave those searches open and hundreds of results will queue over the following ten minutes.

What does all this say? It says clearly that unlike with the Kin, Microsoft has a product on its hands that has truly gotten people excited over, investigating into, and talking about. That was the best that they could have hoped for. Now the question becomes can they turn those conversations into sales, and if so when, and how many.

Read next: Clean Writer for iPad. As grand as Writer at a fraction of the cost