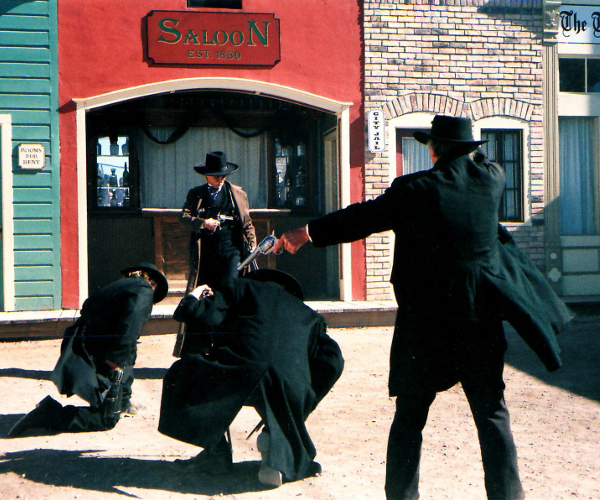 The site is designed to highlight the following HTML5 features:

Microsoft explains the idea behind the site like this:

“As the web and its technologies continue to evolve, we prepare to enter the age of HTML5. Created for «Beauty of the Web» in honor of the launch of Internet Explorer 9, «Never Mind the Bullets» offers the traditional comic strip experience enriched by the effects of parallax. By a simple movement of the mouse the strip becomes animated and the story comes to life”

The project was done by French design firm Steaw Web Design, and was put together over a period of two months.

The site lets you do two things: watch/read/interact with the comic book – doing things like mousing over a saloon door, take a drink, play poker (and deal the cards see the flop, etc) – and it also lets you create your own text for a separate comic book of a duel and then being able to share on Facebook and Twitter.

All of that said – it’s hard to but this experience into words. We just checked it out on IE9 64-bit on Windows 7 and frankly, it’s pretty damn cool. We also tried to watch it with Google Chrome 6, but it certainly did NOT work nearly as well as in IE9 – and a pop-up message warned us that it wouldn’t. Of course, this site was made by Microsoft to feature IE9, but for sure, something in IE9 (probably the hardware acceleration) made this work nearly flawlessly on our system. We’ve taken some screenshots but really, you should go check this out.

Read next: English Premier League for iPad shoots and scores with tremendous features.