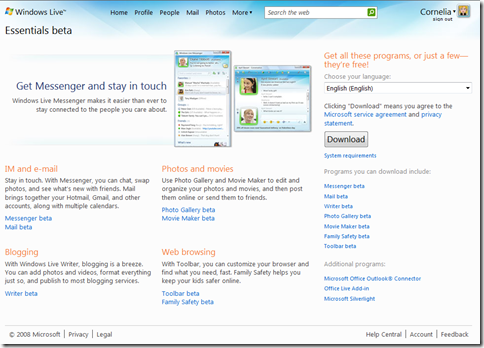 And you thought Google had long betas…

A bit over 3 years, ago, Microsoft launched the beta for the Windows Live Essentials suite.  Today, it is finally ready to take on iLife head on as Windows Live Wave 4 Essentials Suite.

To combat the terrible name, the product line will likely take on the moniker of Windows Live Essentialls 2011 once it’s finally ready for public view.

That’s a pretty hefty offering, especially for a service that doesn’t run $79 like iLife.  The install package is a roll-your-own offering, allowing you to pick and choose which services you want to install and use.

Bad news for those still lingering on XP, though.  The service, while optimized for Windows 7, will still work on Vista…but XP will be left wanting.  The reasoning behind this, according to Microsoft, is that each service will make heavy use of the Vista and 7 feature of JumpLists, for easier navigation to the things you really want.  Further, Windows Live Movie Maker will use codecs available in 7, and not XP. The new Live Essentials pack will also include facial recognition for photo oranization and a rather cool capability called Fuse, that will allow you to do some Photoshop doctoring, without using Photoshop.  It will take the best parts of pictures, and let you choose which ones to use.

According to the ZDNet blog, the only thing that’s missing as a direct competition to iLife is an alternative to GarageBand, Apple’s wildly popular music creation application.

Sounds like those of us who have stayed true to our Microsoft roots are finally getting just deserts.  Though there’s no set