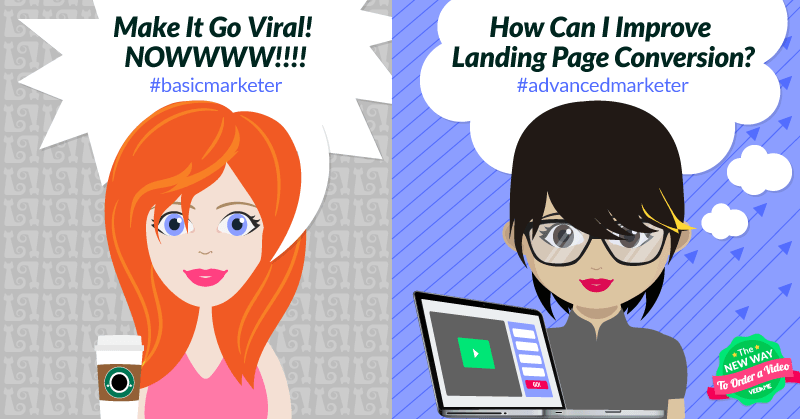 Any modern age marketer worth his salt is under substantial pressure to prove the ROI (return on investment) behind his marketing activities and endeavors. Awash in endless reams of data from dozens of sources, and countless different metrics or signs he/she can measure, it’s no wonder that online video presents somewhat of a conundrum.

Even though it’s clear that video is dominating the internet (70 percent of internet traffic will be video by 2017) and becoming the hottest commodity in the marketing world, there’s still no definitive measurement for discerning business impact, which understandably makes marketers antsy and fearful. All too often we hear the sentiment that “no video is better than a bad one.”

There are also many marketers who don’t think critically enough about objectives and just somehow expect that their video content should “go viral” (More on this unrealistic expectation later…). Any discussion about video RdOI should begin with a clear agreement about the business objectives of the video, and a focus on a narrow specific goal for the video’s content.

However, there are straightforward methods and tactics that you can begin to utilize in order to better understand and measure the impact of online video, which will take away some of the mystery and bring it into the light. Here’s a beginner’s guide:

Tracking Views: Number of views is the most basic and obvious indication of success for online video (the greater the number of views equals the better distribution you have, and the more likely it is that you have a good video.) Still, you can get more specific analyzing by the number of paid views (PPC, YouTube pre-roll, Facebook campaigns etc) vs organic (number of shares on Facebook, Twitter, etc.) Remember though, that in the world of B2B video, a low number of views is not necessarily a bad thing, if you’re getting views from the narrow target you’re looking to convert (which is usually the case for B2B marketers.)

Attention Span Data Tracking (AKA retention): Rather than looking at the total number of views, it’s important to know exactly how long people were viewing your video for, and if they even completed it. You can begin to measure this information using free tools inside YouTube Analytics. With this, you can identify drop-off spots as well as the most engaging parts of your video, and even tweak your content on the fly. This can also be done on Vimeo and other video hosting solutions I discuss later.

Check out this video on what’s available in YouTube analytics:

Measuring Engagement: Engagement is a buzzword, but it basically means the level of interaction with your video, and it’s the next step in understanding the effectiveness of your video beyond the generic view. Specifically, you should look at:

Obviously, when you tie a video to a specific action or goal your business is trying to reach, this is when you can begin to show real ROI (Though of course, the above-mentioned metrics are also important in gauging the overall value of your content.)

One easy way to do this is to establish a simple, clear goal for the video. None of this wishy, washy “I want to go viral!” nonsense. This kind of thinking is naive and unrealistic, because if you don’t have viewer reach millions of people to begin with, it’s unrealistic to expect one video to solve this problem. You should aim to have the purpose of your videos to be similar to the purpose of your text-based assets. For example, a video could have a goal of: collecting info from prospects, reassuring a prospect as they move down the sales funnel, or explaining a product before purchase.

More specifically, let’s say you want to produce a video that will cause visitors to sign up on a landing page form. You can do two things. The first is to A/B test the landing page, and see which one performs better–the one with the video, or the one without. Research has shown that adding a video to a landing page can boost conversions by up to 80 percent.

If you can go a step further and assign a dollar value to each lead generated, you can even begin to come up with a rough dollar ROI by comparing the cost of the video to vs. the value of the leads produced.

When the goal of your video is even more explicit, such as “compelling the customer to purchase this product,” (for a video on a specific product page), it’s possible to get even more accurate with ROI.

As summarized above, there are many free metrics and actions to take to figure out ROI on your video content using existing basic tools.

Rather than the public video hosting platforms like YouTube and Vimeo, these private platforms are centered around specifically identifying your video viewers and their engagement behavior, and tracking it across a huge array of data points. And the best part is that these platforms can be integrated into an organization’s existing marketing automation or CRM system (such as Salesforce, Marketo, HubSpot, etc.), giving you full engagement data down to the individual lead level. They also have a host of other great features like “email gates” for prompting viewers to give contact info before watching a video, etc.

Some of the most popular platforms out there today are Vidyard, Wistia and Vzaar.

It’s understandable that in the modern marketing landscape focused on hyper vigilant awareness of data, analytics and KPIs that video content can seem nebulous and risky. And while it’s true that video is a different animal, there are practical ways to start measuring and proving it’s ROI, as we’ve outlined above.

As stated before, any discussion about ROI should begin with a clear agreement about business objectives, as there are many goals which can be achieved with video–increasing brand awareness, increasing sales, prompting sign-ups, or even just explaining a product. These objectives will determine the type of video content needed. It’s really not enough to just broadly say “I want my video to go viral.” You will see much more ROI on your video when you set clear, narrow and specific goals for your content.

Read next: How to get ahead in advertising

Read next: Japan's getting a $350 million Mario theme park attraction, but will it have a Rainbow Road?