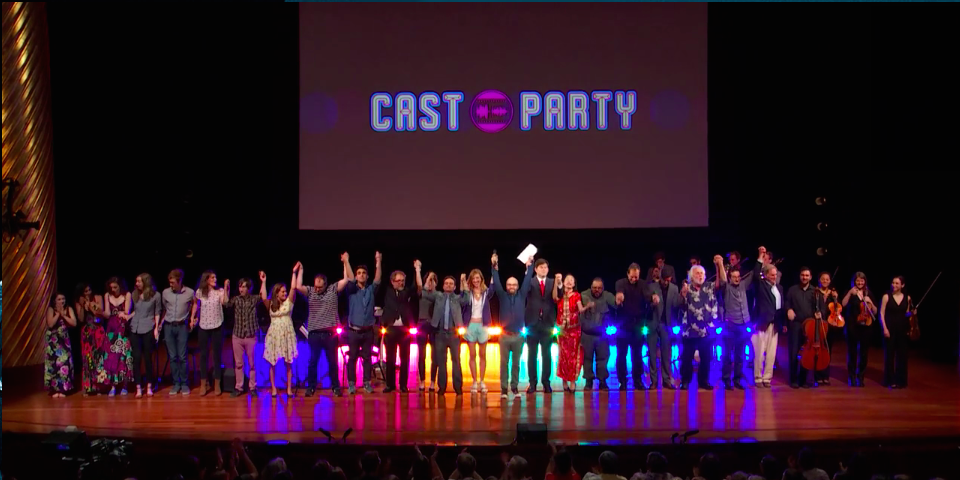 We don’t need to debate about whether podcasts are a ‘thing’ any more. The medium has come a long way since British journalist Ben Hammersley put a name on it, in the rush to define a new phenomenon in time for his deadline.

The President of the United States does podcasts – he rocked up to Marc Maron’s garage for the ‘WTF’ podcast recently, going through the same interview process as any other guest on the interview show.

Podcast pioneers might not always get the props they deserve. ‘Keith And The Girl’, one of my favorite shows – I was a guest on the London live show a few years ago – was unquestionably a trailblazer. Appropriately for an article about live events, they’re just kicking off their first US tour.

Meanwhile, the role of ‘This American Life’ (TAL) in pushing podcasting into the mainstream is unquestionable. The hugely popular public radio show really became a phenomenon when the podcast took its stories to the world.

From the incubating influence of its creator Ira Glass, scores of interesting new shows have been born, many of them driven by TAL contributors or alumni.

Last month, a clutch of them – ‘Radiolab’, ‘Invisibilia’, ‘Reply All’, ‘With Special Guest Lauren Lapkus’, ‘The Truth’, Ira Glass himself and Sarah Koenig of podcasting’s breakout hit ‘Serial’ – came together for a live show called ‘Cast Party.’

The event also featured song and dance from The Westerlies and Cocoon Central Dance Team. Inevitably, the show was sponsored by Audible and MailChimp, both companies that are famous for backing the medium.

The full show is available to download from Vimeo On Demand. To promote that, the company put Seth Lind – Director of Operations at TAL – and PJ Vogt – one of the hosts of Gimlet Media’s ‘Reply All’ – through the wringer of talking to me on the phone.

Here are our chats about the future of podcasting and why ‘Cast Party’ had to happen, condensed to make it seem I spoke to them both at the same time rather than in consecutive calls. Mmm, isn’t it delicious when you see how the sausage is made?

On the genesis of ‘Cast Party’

Anybody who’s working in podcasts… it’s weird, most of the people are here because they started in radio. Nobody got into it because they’re brilliant at figuring out business stuff. It was about doing something fun with people who are our friends and we never get to see. It was crazy to know who’s out there – and have an idea of who is listening to this stuff.

But pragmatically, it seemed like for [‘Reply All’], in particular, we’re such a young show, having the opportunity to have people who listen to move established shows here us, not only is it exposure, it’s exposure to people who really love podcasts. It sort of seemed like, it was a good thing to get in front of those people. It’s fun to perform for people who are really excited. Podcasting is usually so solitary.

It’s just really fun. It’s fun to perform it. The crazy lead up and mechanics aren’t always fun. The event is fun and enjoyable for audiences. This is an attempt to make really high quality entertainment. I don’t know that it’s important, but it’s happening at a time when podcasts are having a renaissance and there’s a renewed interest in different ways.

I’ve produced three, somewhat similar events for TAL, but the difference with ‘Cast Party’ is pulling together five different shows.

One of the things I was really happy about was that Cast Party came together as a coherent show. That was not certain. I did not use a heavy hand with the shows.

We chose then because we like the shows. We had faith that they would adapt well to the stage. ‘Radiolab’ are seasoned performers, but the three of the five shows don’t have a lot of experience with live shows. There was a lot of faith that they’d be able to transform studio operations to the stage. It wasn’t definite that it would work as it did.

We’re in a moment of flux. Coming out of the public radio system – TAL was a public radio show but is now, of course, a podcast. Listening on the radio is flat but the digital audience is growing and growing. So podcast sponsorship becomes more important every year.

The FCC regulates underwriting copy. Right before this show I was emailing about copy that will be in next week’s TAL. With podcasts, it’s a question of tastes. With TAL, we start with broadcast copy and decide, and apply our guidelines. We have not done any native advertising on TAL. The only exception would be the MailChimp ad on ‘Serial’.

We don’t have specific intention to do that on TAL. NPR did a Gimlet Media-style ad with Trunk Club. They sent us that copy and we decided not to allow that on TAL. We won’t do that. If we were much smaller, we wouldn’t have that leverage.

Native reads were part of Gimlet’s plan and to allow them charge higher CPMs. My fiancée’s favorite part of ‘Reply All’ are the ads. They sometimes work for me but other times I’d rather hear a normal spot.

My concerns are two-fold – do I feel odd about taking an ad from this company and will it make it hard to report critically on this company. Even if I don’t feel that way, does it just look bad? How will it seem to the listener?

One of the things we’ve tried to do is to be honest and transparent. Here’s literally music playing that denotes an ad. We did an ad for Microsoft Outlook that was not good. It felt like it crossed a line as an ad and we went out and said that. They’re questions of ethics but also questions of taste. I listen to other podcasts when they do ads and I listen really carefully.

[Gawker’s] John Cook said about a scandal that there’s not two different kinds of ethics – journalism ethics and ‘ethics’ ethics. Sometimes, we get in a weird place – if you were on a reporting trip and you know someone was going to die, would you tell them? Of course! Don’t lie, don’t take money to influence your reporting, be honest!

On the future of podcasting

[Streaming old TAL shows like an automated radio station in the show’s app] was my idea. I thought that it was relatively low-hanging fruit. It’s ended up being a lot of work. It felt like people like to consume shows in different ways. Typically the audience is additive. It also felt like it’s where audio consumption is moving, it’s like the Spotify and Pandora’s of the world.

I could see a ‘podcast’ version of Apple’s Beats 1 working, in a way Public Radio Exchange (PRX) are already doing that with Remix Radio, but in that case it’s on the story level. I do think it would work but it’s worth remembering that podcasts aren’t a genre, they’re a medium.

The thing you hear the most is that podcast discovery is broken. When you’re making the stuff, you’re so aware of it. Whenever someone tells me they like the show, I ask ‘where did you find it?’

The answer? Either someone builds a Netflix for podcasts or it’s going to be about individuals. There’s not a tonne of podcast criticism. There needs to be more, but what there is is worth checking out – try Timbre and the Hot Pod newsletter.

On sexism in podcasting and the wider media

The whole ‘vocal fry’ thing – [Ed: A meme that recently took hold implying certain women’s voice exhibit an annoying tone] – feels like such a non-issue to me.

I’m not convinced it’s an actual vocal trend. People point to extreme versions. Ira has gotten shit for his voice from the get-go. When he first started at National Public Radio with TAL, they said ‘Great, when are you hiring the host?’ They didn’t think he sounded like one.

One of the main points of TAL was to have people sound like actual people. Sometimes I record him in the studio and I get him to say something again so it sounds clearer and he’ll do it begrudgingly.

TAL has always been a show that’s had a 50 percent female staff. There’s always been a strong female voice here on the editorial side. It’s comical to me that that suddenly is an issue. It’s literally just a voice.

There’s still a huge contingent of men who can’t really stomach women doing anything without it being some kind of display that they’re supposedly being asked to comment on. It’s just gross and persisting. I don’t care what those people think.

It’s our job to call out misogyny. I consider ‘vocal fry’ to be that. It’s young women being targeted and I will call that out. I like to think of podcast audiences as young and progressive, but there’s this one sticking point around a manner of speech. As a white dude, I’m privileged. People yell at me because of my ideas, not because of my gender, sexuality or race.

On the return of ‘Cast Party’

The hope and plan all round is to do it again. We had sponsors for this first one and they were really happy with it. The performers really liked it. It was successful in terms of audience size.

Next time I want to get more public radio stations involved. We’ve done that with the TAL live shows and it helped with promotions and building them as local events.

On the internet phenomenon ‘Reply All’ really wants to cover

The thing I want to cover as radio story is the ‘otherkin’ community, because I fundamentally don’t get it. I like stuff where something seems ridiculous or where the motivation of a group of people doesn’t make sense to me.

I like to get to a point where I can have a theory on it and can get convinced by it. But ‘otherkin’ people are hard to sit down with! They just exist online, it seems.

Cast Party is available on Vimeo on Demand to stream and download for $7.99 now.

Read next: Add GIFs to any photo with Giffiti for iOS