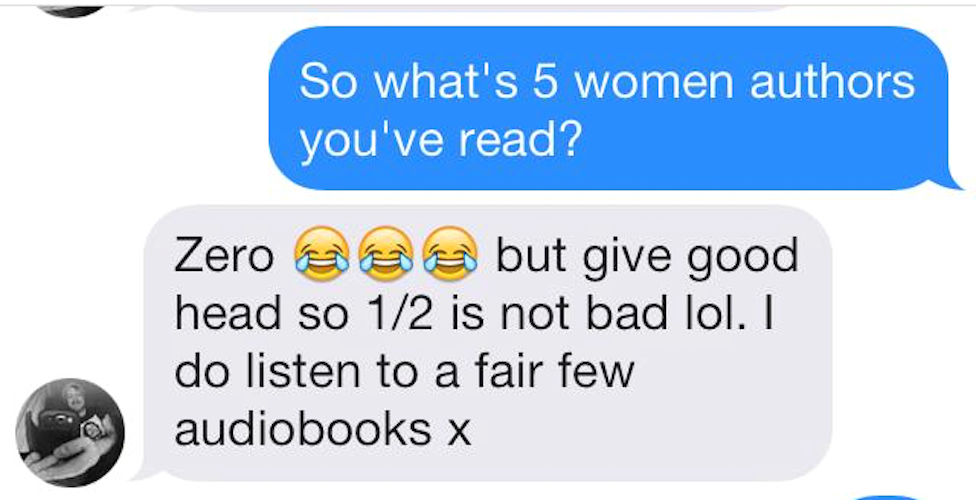 It’s been a big week for Tinder. The dating app that doesn’t want you to think it’s for hookups – it’s totally for hookups – had a full on meltdown on Twitter about this ‘Vanity Fair’ article, predominantly for PR reasons.

Here’s a small story that reflects something a little more interesting about the service and its users:

Tegan aka BellJarred asks men to abide by one rule if they match with her on the app and want to contact her: They have to have read at least five books written by women.

And guess what? Barely any of them can complete the task and many entirely ignore the request, preferring to drop tired old opening lines instead.

In one way, Tegan’s experiment is a slight thing. It makes a point about how men relate to literature and culture. They’re often more drawn to reading about experiences that yoke closely to their own. But there’s a wider resonance to it.

The fact that men don’t read her profile or straight up ignore it, highlights one of the biggest problems with Tinder. It’s a swipe-happy meat market at times and men’s tendency to turn everything into a joke – just look at how some reply to women on Twitter – is on full-on fast forward there.

Intelligent male readers of The Next Web, take the challenge in the comments: Share five books written by women that you’re read and enjoyed.

Read next: Tinder wants you to know it’s not a hookup app, try not to laugh

Read next: Google Maps has a new way to find hard-to-find locations