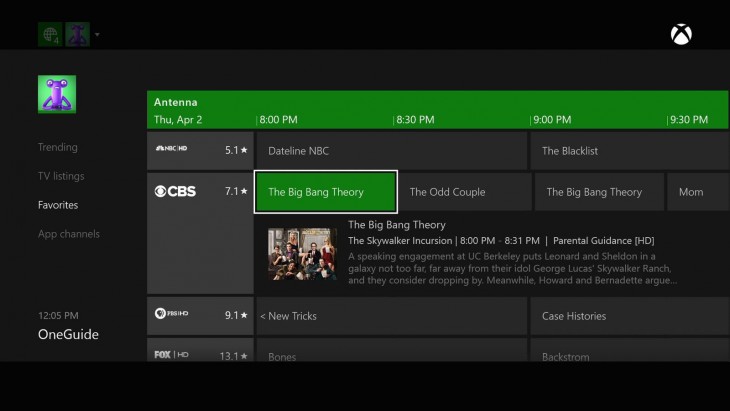 The cord-cutting paradigm continues to shift this week with the arrival of HBO Now and the recent launch of Sling TV. Now, Microsoft wants to get in on the game by offering Xbox One owners a tuner that will bring over-the-air TV that’s integrated right into the Xbox software.

The offering, currently available to those in the invitation-only preview program, is a partnership between Microsoft and Hauppauge, a TV tuner manufacturer. Xbox One users can purchase a Hauppauge tuner for $79.99 and an HDTV antenna, and upon installation, they’ll receive on-screen instructions on how to set up the device to sync within Xbox. Microsoft says it is planning to offer a lower cost model at $59.99 in the coming months.

When synced with the Xbox One, users can switch between gaming and TV seamlessly – much like PlayStation’s recent integration with Spotify. Users can also use voice command via Kinect to change channels, pause live TV for up to 30 minutes, browse current TV listings or cast the stream over to Android, iOS and Windows Phone via the SmartGlass app.

The program is extended to US and Canada residents, and you can visit gomohu.com/xbox to see which channels are available in your local area. I input my neighborhood in New York City and received coverage for basic channels such as ABC, NBC, CBS, CW, Fox, PBS – and about a dozen independent local broadcasts.

Today’s announcement is an expansion of the Xbox One’s foray into TV. Last fall, Microsoft offered an Xbox One digital tuner for live TV streaming in five European markets, with a planned launch for 11 new countries later this year.

➤ TV on Xbox Gets More Versatile with Over-the-Air Tuner for the U.S. and Canada [Xbox]