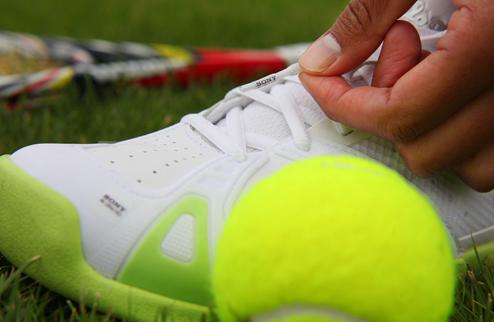 Today’s a big day for sports fans, with Wimbledon 2013 kicking off the third Grand Slam of the tennis calendar year.

And to ‘mark’ the occasion, Sony is launching an interesting advertising campaign designed to showcase its new line of high-resolution 4K TVs, which is rather timely given that its two flagship models – the 55X9 and 65X9 BRAVIA – are hitting stores today.

The technology giant is planting tiny adverts on British tennis star Anne Keothavong, which its calling “microtising”, and will be particularly visible to those watching on one of Sony’s new TVs. Or those lucky enough to get up-close and personal with the number 5 British seed.

Part of this year’s Wimbledon is being filmed for the first time in 4k Ultra HD, with Sony’s F55 35mm 4K and an NEX-FS700 camera providing up to four times greater resolution than that of standard HD. This means you should be able to see Keothavong sporting Sony ads on the hem of her skirt, shoelaces, fingernails and equipment.

“With more footage being generated in 4K people are going to see every single detail and get much closer to the action,” says Paul Gyles, Marketing Head of Sony Televisions. “We thought we’d push it to the limit by running a microtising campaign – proving that Sony televisions can pick up on the smallest details.”

Sony says the campaign will run however long Keothavong remains in this year’s tournament, which may not be too long given she’s never progressed beyond round 2 of Wimbledon. But if nothing else, it shows the potential such technology offers advertisers, with more subtle branding enabled in addition to larger slogans emblazoned across their t-shirts.

“The Championships may be the oldest tennis tournament in the world, but that doesn’t mean we’re behind the times as proven by the cutting edge 4k Ultra HD partnership we’re running in conjunction with Sony this year,” says Mick Desmond, Commercial Director of the All England Lawn Tennis Club. “We’re very proud to be the first tennis tournament – and indeed one of the first major sporting events globally – to embrace this new technology.”

Meanwhile, if stupidly high-res TV tickles your fancy, you may want to read about Super Hi-Vision which promises 16 times the resolution of standard HD, but that’s not expected to go mainstream until about 2020.

Read next: Offline over the weekend? We’ve got the tech news you missed right here