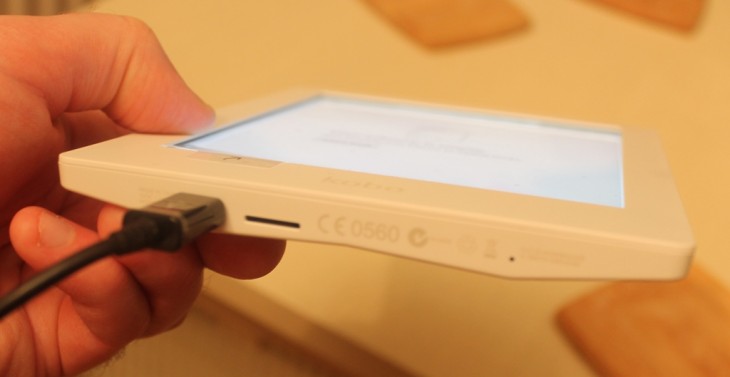 Going on sale on pre-order tomorrow (April 16, 2013), TNW managed to get a hands-on with Kobo’s new device, which features a 6.8″ E Ink display and is geared towards those really passionate about their reading, according to Kobo CEO Michael Serbinis.

“From the beginning, Kobo has pushed the ereading industry to new heights and today is no exception,” he says. “Kobo Aura HD is designed for the most passionate booklovers – those who devour hundreds of stories each year – who asked us to create the ultimate ereading experience. Kobo Aura HD is our way of celebrating these customers.”

Indeed, while no precise timescale has been placed on its availability in the long term, it will be on sale in all markets by early summer, though the US, Canada, France and the UK will get the device first.

Just to recap the key features again briefly, the Kobo Aura HD offers one of the highest-resolution screens in an ereader today – remember, this isn’t a tablet. At 265 dpi, the 6.8″ Pearl E Ink touchscreen trumps the Kindle Paperwhite on both size and resolution, and does a pretty impressive job of replicating the paper experience. It sports a 1GHz processor, 4GB of storage (expandable to 32GB) and boasts a battery life of up to two months. Oh, and this baby is WiFi-only – no 3G.

Anyway, without further ado, here’s what it looks like…

The new Kobo Aura HD comes packed in a fairly understated cardboard box – it certainly doesn’t scream ‘hi-tech’, more ‘this is a box of envelopes’. Which I actually quite like.

The bottom end is where you’ll find the standard micro USB charging port, next to a micro SD slot that can expand your ereader from the built-in 4GB.

On the top end is the sleep and power-off button – you pull it to the right and release it quickly to put it to sleep; To power off, slide and hold for a few seconds. Next to that is the screen’s back-light button, which you can press to enjoy a little night-time reading.

It takes a few seconds to run through the usual set-up process, including preferred language, time-zone and WiFi network.

On my initial dabblings, I honestly didn’t find the screen overly receptive to my touch – things just felt a little on the slow side if truth be told. For example, when entering text via the on-screen keypad, there was maybe a half-second lag between me hitting the key, and it taking effect.

The back of the Kobo has a wavy, ridged surface, evidently designed to make it easier to grip.

Adding books is straight-forward – when you log-in with your Kobo account details, any previous books you’ve purchases will show up, and any you buy from within the Aura HD will be synced across other devices, as well as the Kobo mobile apps.

Additional features on the device include Reading Life, which lets you track your reading stats and share what you’re reading, favorite passages of texts and more to your Facebook Timeline.

However, the biggest surprise for me was to be found deep in the guts of the ‘Settings’ menu, alongside games such as chess, solitaire and Sudoku. Yes, the Aura HD – an ereader – has a built-in Web browser. And it’s not very good.

Anyone used to browsing the Internet on a touchscreen device, be it a tablet or smartphone, will find this feature a little unusable. It feels like it’s been buried away for a reason, though as with the Kindle Paperwhite’s built-in browser, this is likely an ‘experiment’ too.

It was fairly slow for starters, but given the Aura HD is more about turning pages as opposed to slick scrolling a la the iPad, it really didn’t feel too suited to browsing. But it did work, and it would likely suffice for a quick check of the news or latest football scores if your smartphone wasn’t at hand.

In terms of the screen, well, it is pretty impressive. And there’s 10 fonts to choose from, with 24 adjustable font sizes too. And homing in on the home screen, you’ll see a new, “modern” library display.

“To us, the Kobo Aura HD is the Porsche of ereaders and is designed for those in the driver’s seat of their ereading adventures,” explained Wayne White, EVP and General Manager of Devices at Kobo. “It’s fast, powerful, and sleek and pushes the boundaries of ereading the same way our readers do – together, they’ll know no bounds as they find their next great read.”

It’s early days yet, and we’ve only just skimmed the surface with it. It’s interesting to see Kobo launch what it’s calling a ‘limited edition’ device – if it proves successful, it’s difficult to see Kobo pulling this one from the market any time soon.

The Kobo Aura HD goes on pre-order tomorrow (April 16, 2013) in the US, UK, Canada and France, with all 13 Kobo markets likely to get access to the device in a month or so.