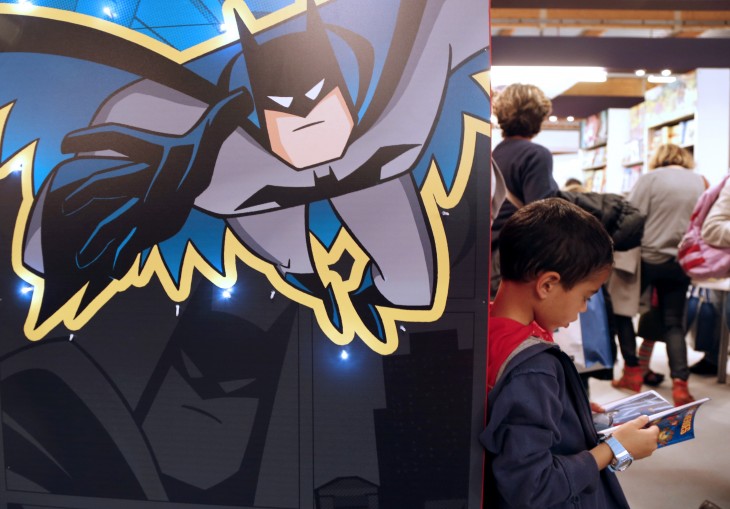 As the world of physical content attempts to come to grips with the digital economy, bundling — adding a digital download code to a physical item, like an UltraViolet code with a Blu-ray disc or a Comixology code with a Marvel comic book — is one of the ways traditional media has attempted to cope. A possibly unintended consequence of this bundling is the creation of a secondary market for these digital codes.

Not everyone who purchases the physical item wants to use the digital copy. This has created a secondary market for the codes.  Unlike the the old-fashioned market for used books and DVDs, the secondary market for downloads codes has also started a legal fight in the United States. Traditionally, the right to sell something like a used book is covered by “first sale” doctrine. The Electronic Frontier Foundation describes the issue in terms of the Capital vs. Redigi lawsuit in the world of digital music:

“According to Capitol, the first sale doctrine simply doesn’t apply to digital goods, because there is no way to “transfer” them without making copies. When users upload their music the cloud, they are making a copy of that music, whether or not they subsequently (or simultaneously) delete it from their own computers, and the first sale doctrine doesn’t protect copying.”

This philosophy has been extended to download codes. While it’s debatable how easy it would be to make a copy of the Comixology comic you redeemed your code for, the digital edition is being treated like a copy of the physical. It doesn’t necessarily make sense, but that’s how many media companies are choosing to interpret the law. This will eventually play out in court, but that’s where things stand right now.

In the case of UltraViolet codes, the movie studios have made an attempt to crackdown on the sale of codes. In 2012, there was a well-reported incident of eBay removing codes on grounds that it was copyright infringement. There are a few Ultraviolet codes currently on sale at eBay and a mere 298 listed as completed sales.  Few slip through and a price range of $5-$8 seems to be the norm.

Outside of eBay it’s relatively easy to use Google to find somewhere to swap or purchase Ultraviolet codes. The Home Theater Forum’s classified ad section has codes sprinkled in, with a low $2-$3 looking like a common price. Codes are also easy to find on Reddit, including a dedicated subreddit, though codes on Reddit are swapped or given away, not sold.

It’s very hard to crack down on something like this, especially if the exchange is done offline. Still, if you look around the Ultraviolet codes are being sold cheaply, largely by people who only plan on using the Blu-ray disc.

Marvel Comics seems to be taking the opposite stance as the film studios for their digital comics. The terms of use say “Unless otherwise stated in writing by Marvel, you may not sell, rent, lease, distribute, broadcast, stream, sublicense, transfer, or otherwise assign any rights to the Digital Content or any portion of it to any third party, and you may not remove or modify any proprietary notices or labels on the Digital Content,” but Marvel seems to be actively encouraging people to exchange codes.

Jayatilleke frequently tweets codes for random fans to redeem. He’s not the only one. Spider-Man writer Dan Slott, not only tweets free codes from Marvel, he’ll retweet codes from other fans who post them.

The popular comics gossip site, Bleeding Cool, maintains an active thread where users trade or sell codes. When asked if Marvel had spoken to him about the codes, Bleeding Cool’s Richard Johnston said “Nope. If anything they seem happy with it.”

Whereas Ultraviolet codes were the subject of an eBay crackdown, Marvel’s download codes seem to be fair game. Type in “Marvel code” on eBay and you’ll find plenty to bid on. The prices on eBay tend to range from $0.99 to $2.50, with most codes settling around $2. Over at Bleeding Cool, the price ranges from $0.99 to $2 on the codes being sold and tends to be closer to $1-$1.50 range, on average.

While the exchange of these digital codes is distributed across a number of different sites, we’re seeing the beginnings of a secondary market forming. There are standard price ranges. There are people gathering to sell and trade. In the case of Marvel, it’s a little more out in the open. For the movie industry, this seems to be an unintended consequence, as studios groped around for an alternative to digital piracy, only to spawn what they seem to consider a new flavor of the same problem.

It also encourages people to experience the digital comics format. While it’s hard to look at the sales charts and think that Marvel is gaining large numbers of print sales from this digital sharing, it’s entirely possible they’re growing their digital sales. By giving away codes, Marvel should be able to track the before and after buying patterns for people who received the promotional codes.

On the other hand, this secondary market may be ascribing more value to the digital code than to the printed comic the code comes from. The digital codes run from $0.99 to a little over $2.00.  What’s the resale value of a print comic?

“The average resale value of ANY comic from any publisher at any price point drops to probably no better than half cover price (wholesale) — and most books realistically will drop to nickles or quarters in the comics store environment,” explains Brian Hibbs, the owner of San Francisco’s Comix Experience store and columnist on comic book retailing. “Certainly, that answer will be closer to cover price when you look at eBay, but for the average consumer, the ability to process eBay transactions is very limited, and would yield less-than-minimum-wage for doing so. In terms of actual liquidity? Call it 25 cents to be generous.”

“At Challengers we really don’t do Back Issues,” offers Patrick Brower, co-owner of Chicago’s Challengers Comics + Conversation. “We do, but they are all 99¢ regardless of publisher/title/creator/content, so I guess our answer is that each book is worth 99¢ as it leaves the lot—er, store.”

To make the situation even more unusual, at this point, there’s no industry price devaluation on a print comic whose digital code has been redeemed. Hibbs feels it’s just too early for one to have been established. Brower thinks there probably should be, but hasn’t heard of it having happened. If a person could get $2 for the digital code on a consistent basis, it could make sense for retailers to sell the code for books that sit on the shelf for a few weeks. In theory, the sale of the code would cover, or come close to covering, the wholesale cost of the comic and the retailer would go in the black even if the print copy were sold at a significant discount.  For that matter, a consumer might be able to buy a comic in the $1 clearance bin and turn a small profit on the code.

Looking at eBay and Bleeding Cool, that’s where the math is heading and it’s unprecedented.

With all this sharing and selling of codes, it raises a question of why so many people are disposing of their codes, rather than using them for themselves.  Marvel has two price points for their monthly comics: $2.99 and $3.99.  All the $3.99 have codes included. DC Comics, Marvel’s publishing rival, also sells a small number of titles that include digital codes. Those issues are called “combo packs” and retail for a dollar more than the versions without codes.  DC has said the redemption rate on those digital codes is “astonishingly low” and attributed it to collectors treating the combo pack as another edition of the comic, bought to keep the collection complete.

Does Marvel’s audience differ from DC’s to the extent that they need the codes?

Marvel, which seldom comments on business matters, says that the redemption of digital codes is something they’re “not comfortable chatting about at this time.”

Marvel does have an affiliate program where retailers are paid for codes from comics purchased in their stores. Hibbs estimated that perhaps 1 in 500 were redeemed, although it’s possible that some people just were filling out the store information while redeeming the code. Brower estimates 5% of customers redeem the digital code, “but those that do, redeem them all.” Neither Hibbs nor Brower has heard other retailers having a meaningful discussion about those redemption rates, which suggests there may not be much to talk about. “This is the same question we have always had about digital comics… who is buying them,” added Brower.

Where are these circulating codes coming from?

“These are all people who like print and are willing to pay the $3.99 for it,” explains Jeff Lester, host of a popular comics podcast at The Savage Critics. After mentioning on the podcast that he wasn’t purchasing Marvel titles, his audience started sending him download codes and he’s usually gifted with 2-4 each week. “In some cases, they’ve tried the digital code and it wasn’t really their thing or they don’t have a tablet (and didn’t enjoy reading them on their PC). In some cases, they tried passing them along to friends first, who also didn’t like the experience.”

There’s certainly a digital audience, but much of the anecdotal evidence continues to suggest that it’s a different segment than the print readers and collectors. Why bundle? The consensus recalls Watergate: follow the money.

“My major ‘concern’ about the codes is that they are being used to ‘justify’ a higher cover price,” says Hibbs.

“Personally, I don’t mind the digital codes,” says Brower. “I think it’s a neat bonus, especially if you’re a life-long collector and space is an issue. You can buy and read the book, donate it, and keep a digital copy if you want to go back and read it again. I don’t think they should cost you MORE, but I like the idea of the digital copy.”

“I think honestly the digital codes are very much after-the-thought as far as the $3.99 price point goes,” says Lester.  “I think someone at Marvel set that price-point and, when there was a lot of push back on the marketplace on it, the idea to bundle the digital code in for free came up. ”

If a consumer got $1 for the digital code, the print price would be $2.99, the same as buying one of the titles with no code. Get $2 and your comic is half price, the same as swapping codes with a friend. That the numbers line up that way is likely coincidence.

With Ultraviolet, the going rate of the codes is a much smaller percentage of the cost of a Blu-ray and is a cheap purchase for someone who just wants digital. It probably has a small impact on the rental market, too. With comics, the going rate for the codes relative to the print price could make for interesting economics if more people swap and sell codes.

In both cases, the outside observer is left to wonder how many people really require both a physical and digital copy. At least Marvel gets some promotional use out of their experience.

Lester sums it up nicely: “I think Marvel’s indifference to having their codes exchanged or tweeted is actually–although I have no idea if it’s done intentionally or not–pretty decent outreach: it allows fans to “loan” the book to a friend or, in the case of Slott, being able to get people to sample his storyline just as it was picking up steam.”

Read next: Bangalore brings India's startup ecosystem into the limelight, but how exactly is it faring?