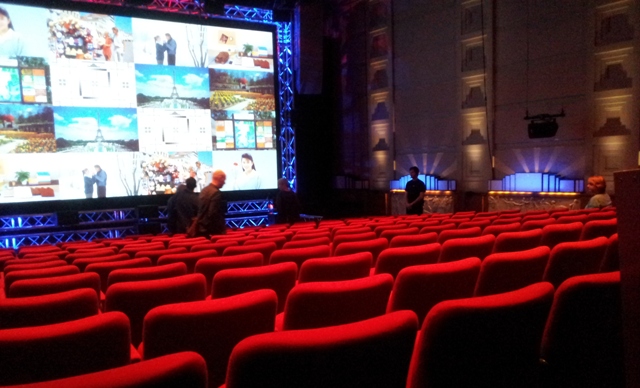 No sooner are we getting to grips with 3D and HD, and we’re already being told about the “next big thing” in televisual technology. But keep your hat on, this next one is some years away yet.

Super Hi-Vision (or Ultra High Definition) has been getting a fair bit of coverage of late, largely due to the BBC’s partnership with Japanese broadcaster NHK for the 2012 Olympics.

The technology underlying Super Hi-Vision has been developed in large by NHK’s Science and Technology Research laboratories, which the BBC borrowed to showcase its potential as a broadcasting medium. While the BBC did a tentative test with the technology back in 2010, it was all really gearing up to the Olympics.

Super Hi-Vision combines images 16 times the resolution of High Definition television, with a 22.2 multichannel surround sound. As you’d maybe imagine, when viewed on a purpose-built big screen, the effect is phenomenal.

With a prototype camera, microphones and specially-adapted truck – which have all been shipped from Japan – the BBC has made a number of special Super Hi-Vision broadcasts throughout the Olympics, in London, Glasgow and Bradford in the UK, as well as in Japan and the US.

Regular (free) ticketed screenings have taken place between Monday July 23 (which included a specially made pre-event film), all the way through to the finale on Sunday August 12. And this week, The Next Web was privileged to go behind the scenes at BBC Television Centre in London, to see how the magic happens.

Nestled in a series of little studios, there was a team of technicians and engineers – many of whom have been brought over from NHK’s research labs – pulling levers, and flicking switches to ensure everything comes together nicely.

Seeing how much effort was going in to making the Super Hi-Vision broadcasts possible really hit home how groundbreaking this technology is.

The BBC essentially has three Super Hi-Vision cameras at their selected events – the only three in existence, I might add.

Compare that to the umpteen that exist with normal broadcasts (HD or otherwise) during the Olympics, capturing underwater action, crowd shots, and just about every conceivable angle under the sun, it would seem that Super Hi-Vision is up against it. Right?

We were privy to a special 25-minute highlights package of the opening ceremony, plus live coverage of a number of swimming events direct from the Aquatics Centre. And we can say that it was like being in the crowd – it was so crystal clear, it was akin to watching it through a window in a corporate box (not that I’d know).

But the real kicker for me with this, was how they chose to broadcast it. A typical sporting broadcast will have statistical and visual overlays on the screen – this could be a timer, scoreline or key data relating to an athlete. It will also have commentary and analysis from experts over the top.

For this, the BBC opted not to include any of that. What you see is what you get – a crowd’s eye perspective. You can hear all the commentary that’s going on over the loud speaker in the auditorium, and you can see the giant neon scoreboard that the crowd can see.

Here’s a short compilation of clips that we filmed while watching the broadcast. Bear in mind, the full quality of Super Hi-Vision won’t come across in this for obvious reasons, but it will hopefully give you a flavor of what the experience is like – you’ll also observe in the swimming (1:40 onwards), that it looks like I’m filming from the crowd:

For me, this fundamentally changes the live sports broadcasting experience. I often hear people complain about crap or annoying TV commentators, so something like this will bode very well for the future.

Okay…so when will Super Hi-Vision be hitting my livingroom?

That’s a fair question. But we’re way, way off having Super Hi-Vision anywhere near our homes at present. The Olympics has been a testbed for the technology, where it goes from here is anyone’s guess. Though the BBC reckons that we’ll start seeing this technology hitting the mainstream by around 2020.

As it stands, Super Hi-Vision is still in its infancy, but judging from our brief flirtation with it, it will certainly be massive one day. And while it does lend itself particularly well to live sports broadcasting, it will equally work for big budget, graphics-laden movies, and could deal a mighty hammer blow to cinemas.

Ten years from now, when 85-inch Super Hi-Vision TVs are hitting the market, you could well see some movies debuting not in your local multiplex, but on Netflix. Now there’s a thought.

We’ve previously reported that the BBC’s Perceptive Media experiments could transform TV forever, something it unveiled for the first time last month. Essentially, it’s media – either video or audio – that adapts itself based on information it knows about individual viewers. Throw Super Hi-Vision into the mix, and the televisual landscape a decade from now could look very different indeed.

Read next: Vkontakte is in hot water over its refusal to introduce same-sex relationship status options