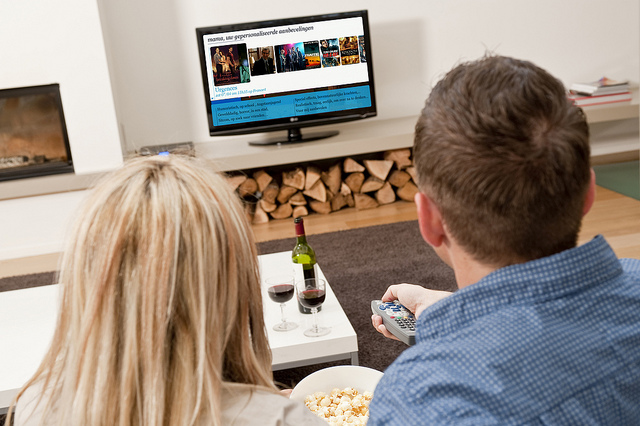 The entertainment discovery engine Jinni is launching its first set-top box as part of its ongoing partnership with the Belgian telecommunications operator Belgacom, the Israeli startup announced today.

Introduced progressively among subscribers since June 19th, this Jinni-powered box lets IPTV users find content they may be interested in, thanks to what the startup describes as its semantic taste & mood discovery engine. Here’s what its user interface looks like across Belgacom’s VOD platform and EPG:

The above screenshot is an example of the “taste channels” Jinni can display to each user. VOD aside, it also works for live TV, helping viewers answer the question: “What’s airing right now that I would enjoy?”

In addition to these passive content discovery options, users can also make advanced searches in Belgacom’s catalogue, which is powered by Jinni’s Entertainment Genome and friendlier to natural language phrasing.

Since a home TV is more often than not a shared device, Jinni’s box also lets users create individual profiles, to make sure suggestions are adapted to their personal taste, rather than to their kids’. It’s also worth noting that the system is opt-in based.

Jinni’s suggestions also get better over time, as users keep on rating the films and TV shows they have been watching. As some of you may understand from the screenshot below, users are giving a large range of options, from “terrible” to “awesome.”

Jinni then uses these preferences to suggest content that is similar to a user’s favorite show – in that example, “SpongeBob,” which generates recommendations for other animation series.

While this UI is new, the partnership between Belgacom and Jinni started in September 2010, and took a step up when the Belgian operator took part in the startup’s second round of funding in early 2011. Since then, Belgacom has been using Jinni’s engine for its online service, as well as for its mobile and connected TV apps, a product range which the new set-top box is now completing.

Jinni’s co-founder & CEO Yosi Glick, commented on this new agreement with Belgacom: “We are very happy with the opportunity given to both sides and look forward to hearing about their subscribers’ experiences with the new features, as they have been given the good fortune to be the first consumer market to benefit from user-centric discovery across linear TV and VOD.”

It’s worth reminding that Belgacom is only one of the high-profile partners Jinni has attracted since its public beta launch in 2009. As we reported last September, the startup also closed a deal with Microsoft, which means it wouldn’t be very surprising for the Xbox and Windows 8 to use its content discovery engine.