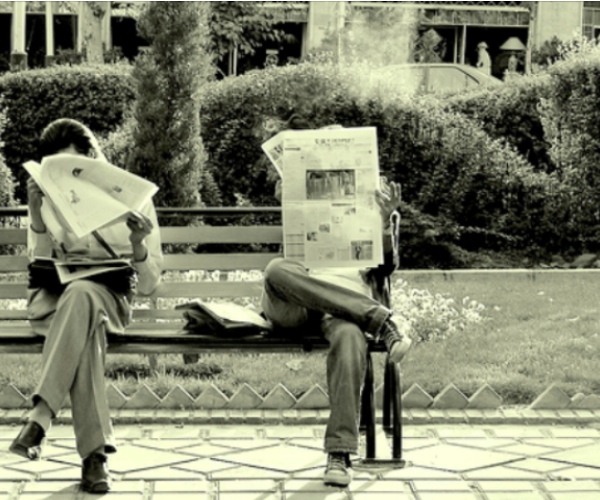 What’s going on in your neighborhood? If you live in New York City, you can find out on Neighborhoodr’s local Tumblr built blog network.

If Craigslist is the modern day Classified section, then Neighborhoodr is its editorial component. It acts like a newspaper for each neighborhood, filled with little stories. In New York City, people move around a lot. (I’m only 26 and am now living in my 7th apartment in NYC.) There’s also a lot going on in New York and its inhabitants are notorious for wanting to share that information. Neighborhoodr provides local content for 60 New York City neighborhoods, so that wherever you are, or whenever you move, they’ve got a news local outlet for you to browse, contribute to and share.

Here’s how it works. Visit the Neighborhoodr site and pick your neighborhood, which takes you to the specific Tumblr blog. View the blog’s content or click the big red button to submit a post. Once you’ve submitted a post it will be added into a queue to pass by the eyes of one of Neighborhoodr’s 50 local moderators.

Gawker‘s Richard Blakeley and Reuters‘ Anthony De Rosa officially launched Neighborhoodr in September 2009. While Neighborhoodr doesn’t aim to be the go to place for political crises in the world, it was the go to place for local Brooklynites to share information and read about the tornadoes that touched down in the hood this fall. And a local Williamsburg resident even used the blog to find her lost puppy.

“The simple fact of the matter is nobody has quite cracked the hyper-local news market yet, and of all the attempts Neighborhoodr comes closest in terms of functionality, reach, quality and engaged users. We are also aware it’s going to take several more years before we’re at the intersection of hyper-local and user submitted blog content, but when we get there we hope to be right in the middle of it,” says Co-Founder Richard Blakeley.

Neighborhoodr is riding atop a pretty big wave. Tumblr hit 1.2 billion pageviews in the U.S. in October, up 1,540% from the year before, according to a recent TechCrunch article. Yesterday, Tumblr announced that their network has expanded to more than 11 million blogs. And RWW just reported that in fact Tumblr now has more page views and money than WordPress.

Co-founders Blakeley and DeRosa are bullish on Tumblr. “Tumblr is way more viral than Twitter and tweets have a short shelf life,” says Blakeley. “But Twitter does act like  CB radio, leading eyeballs to Tumblr.” Since they use Tumblr, they measure their user base by subscriptions not page views. In less than a year they’ve grown from 600 subscribers to over 3,000. “I like to call re-blogs ‘sideways traffic,'” Blakeley says, “Because when you see something good enough, you just have to reblog it because it’s so easy.”

And the best part about Tumblr?  The site is free for users and there’s literally no overhead for the site. In fact, they haven’t put a penny into the operation since it started. But they have started to make money. They’ve signed up their first advertiser, Tanqueray, the gin company, that is sponsoring a “cocktail safari” in Manhattan for the team and their friends as I write this post. De Rosa says the blog will be a powerful tool for businesses who don’t want to take out expensive ads in sites like Eater but want to cheaply advertise to a hyper local, targeted market. While they haven’t nailed down a number yet, ad space on the site will be in the ball park of $100 p/month.

With 3,000 dedicated contributors who know how to spread content virally, I’m feeling pretty bullish on Neighborhoodr. After all, how could you live in a neighborhood, use Tumblr and not want to follow your local news?