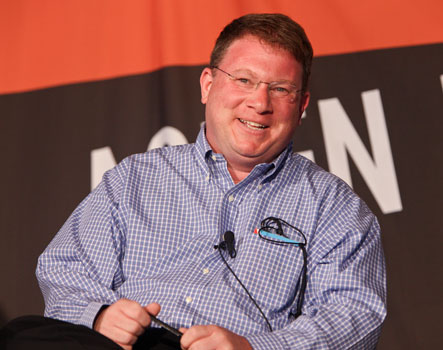 To illustrate the effect of media criticism in a Web 2.0/3.0 age, one merely has to compare Atlantic writer Jeffrey Goldberg’s defensive stance toward his critics today to when he was penning pieces for the New Yorker earlier this decade.

In 2002, the journalist had written two long articles for the New Yorker that many critics now label as being among the loudest drumbeats for the Iraq invasion. In the wake of this reporting, Goldberg received an Oversea’s Press Award and a prestigious National Magazine Award. In the run-up to the invasion he was invited on multiple cable news shows where the hosts, for the most part, treated him with reverential respect as he made his case for war. Back then, Daily Kos — one of the leading anti-war blogs — was still in its infancy, having just launched that year. Many Americans didn’t know what a blog was (much less read any) and it was still two years away from the netroots’ rise to prominence during the 2004 elections.

Compare this to the series of blog posts he’s written recently after the publication of an Atlantic article titled “The Point of No Return,” in which he asserts that Iran is surely pursuing the manufacturing of nuclear weapons and that Israel, in response to this threat, may bomb the country within the next year. The posts appear on his Atlantic-hosted blog and adopt a defensive crouch against the deluge of extremely critical blog posts that have appeared in response to his article.

Among his critics, none is louder or more relentless than Salon columnist/blogger Glenn Greenwald. On a whim, I copy and pasted all his columns on Goldberg into a single Word document and found that Greenwald has devoted over 10,000 words to addressing the Atlantic writer. Much of his criticism juxtaposes claims in Goldberg’s 2002 writing to later revelations and the journalist’s recent claims. For instance, the Salon blogger has pointed out more than once a 2002 Slate piece in which Goldberg argues that “people with limited experience in the Middle East” reach “the naive conclusion that an invasion of Iraq will cause America to be loathed in the Middle East.” Any objective reader would conclude that in hindsight this quote could be used as a cudgel to Goldberg’s claims to Middle East expertise. Another Goldberg quote Greenwald and others turn to comes from one of his New Yorker pieces, where he points out that after a 1981 Israeli bombing attack on Iraq, Saddam Hussein “rebuilt, redoubled his efforts” to turn his country into a nuclear power. In the recent Atlantic piece, he says the exact opposite, arguing that the bombing “[halted]– forever, as it turned out — Saddam Hussein’s nuclear ambitions.” Critics alleged that these two counter claims served Goldberg’s arguments at the time of publication. In 2002, he wanted to convince readers that Hussein had nuclear weapons, necessitating an attack. In 2010, it’s that an Israeli bombing of a Muslim country would halt its nuclear ambitions.

Greenwald’s attacks have not gone unnoticed. To date, Goldberg has posted more than a half dozen responses to the Salon blogger, and when Goldberg recently appeared on NPR’s On Point a caller cited Greenwald when asking a question. Rather than answering the listener’s question, he claimed erroneously that Greenwald had retracted his criticism, a claim that was undeniably false (and one that Greenwald was quick to point out). Given all this back-and-forth public discussion between the two, I was surprised when Goldberg denied my request for an interview for this piece, saying that he was “not interested in talking about Glenn Greenwald anymore.”

But one may wonder why the Salon blogger has spent so much time with his sights on a single writer. Is this some kind of obsessive feud that keeps Greenwald relentlessly coming back to the same subject time and again?

“I don’t think that just because someone is wrong about something that they should forever have their credibility impaired,” he told me in a phone interview. “But I think there are two things that distinguish this case. One is the consequentiality of it and the centrality he played. It wasn’t like he was just kind of wrong about something, he was one of the leading people validating the war. The thing that happened in the Iraq War is that obviously the right got behind it because the people on the right — the leaders on the right — were clearly behind it. But in order to make it a majoritarian movement, they had to get centrists and liberals behind it. So they needed liberal validators … There’s probably nobody that you can compare in influence to getting Democrats and liberals to support the war than Jeffrey Goldberg. It wasn’t just that he was for the war, he was using his status as a reporter to feed lies. I mean he didn’t just write one New Yorker piece but a second one too, and he was all over the television with this stuff saying that Saddam had a very active nuclear program and most importantly that Saddam had an enthusiastic alliance with al-Qaeda.” The second distinguishing characteristic of Goldberg, Greenwald argued, is that he’s one of the few mainstream reporters who hasn’t issued a mea culpa on the facts he got wrong. Greenwald pointed out that though Judith Miller paid a career price for her Iraq reporting at the New York Times, Goldberg — who Greenwald considers equally culpable — continues to gain prominence despite doubling down on his past reporting. In fact, Goldberg recently used his blog to argue that there truly was a strong connection between Saddam and al-Qaeda.

One could argue that Goldberg responding to his critics indicates he’s open to dialog about his reporting, but reviewing all his blog posts on the matter, I and others have concluded that he rarely responds to the actual charges being made. In a recent post he said that the Salon blogger is “incapable of reason; incapable of fairness; incapable of understanding complexity,” and that his “friends in journalism who have been targets of his attacks warned me against trying to reason with him.” This hasn’t escaped Greenwald’s notice.

“[Goldberg’s responses] are all substance free,” he told me. “It’s funny. It’s almost like his responses are three or four years behind. When I first started writing about criticizing media figures — establishment media figures — that was very much the reaction. It was a very lame sort of not-really-attentive response, just dismissive or plain mockery. Like, ‘I don’t have to respond because in my world he’s nobody and I’m somebody so the most I’m going to do is be derisive about this.’ That’s a journalist/blogger cliché from 2005, and most journalists know they can no longer get away with it. He’s living in a world where he thinks it doesn’t affect his reputation. Among his friends it doesn’t. I’m sure he calls [TIME writer] Joe Klein or whoever else I’ve criticized and he’s like ‘he’s an asshole and a prick, don’t worry about that.’ But I guarantee you that there are a lot more people reading the stuff I write than the stuff he writes, in terms of sheer number. And the level of impact that that kind of level of critique has is infinitely greater than it was three years ago. So I’m sure he tells himself and convinces himself that it doesn’t actually matter but it does. And it’s hurting his credibility.”

According to Compete, Salon’s online readership is far above The Alantic’s (though this doesn’t take into account the latter’s print readership), and Greenwald is regularly cited in the New York Times, invited onto cable news and radio shows, and even recently appeared on a panel for ABC’s This Week. He has also written a New York Times bestseller. It would be hard to deny that the blogger has an equally large platform with which to take on Goldberg.

Peter Hart, an activism director for the media watchdog group FAIR, told me that it’s partly this large following that enables Greenwald to elicit responses from Goldberg, but it’s also the Salon blogger’s tendency to leave no stone unturned. “You end up with people who are excellent media critics, like Greenwald, who because of their platform are really able to get under the skin of people like Joe Klein and Jeffrey Goldberg in a way that I don’t think anyone else can,” he said. “I think it’s in part because Greenwald is so relentless. He has the ability to stay on something and write it and rewrite it. And that is part of the conversation that I think really frustrates journalists, and in particular pundit journalists.”

But like Greenwald, Hart doesn’t believe that Goldberg is actually taking the time to assess his own journalism or even defend it. “In this case there is no substantive response,” he said. “To go on [NPR] and say that Glenn Greenwald is a humor columnist — well, that’s saying you’re not taking this seriously and you have no response to it. To say that a caller who is basically repeating the criticism that has been articulated by Glenn Greenwald and people like him is misreading the article is false. So I think that’s their default reaction. We’ve always likened this – it’s an analogy that I think that works – to doctors doing surgery. And the patient — in this case the readers — are not supposed to sit up and offer tips and criticisms of how the doctor is behaving. That’s their conception of how journalism should work.”

But if you’re not going to defend your work, why reply at all? Hart was at a loss when I asked this question.

“The smartest PR advice any journalist would follow would be to not respond. The wise journalists who don’t want to look foolish pursue that course. They don’t want to try and engage bloggers over the years and you’ll find many of them will just ignore you because they don’t want to get into any of this. And I assume it’s because they know there’s little for them to gain from it, and a lot to lose.”

But despite this notion, Goldberg doesn’t seem to be at a loss for a platform. As Greenwald pointed out in an update to a recent post:

“This Sunday’s roundtable on Meet the Press will be conservative Rick Lazio, conservative Paul Gigot of The Wall Street Journal, journalist Katty Kay of the BBC, and, for balance . . . the well-known liberal Jeffrey Goldberg. Ladies and Gentleman: your Liberal (and Supremely Accountability-Free) Media.”

Read next: So Apple's live streaming to everyone tomorrow...except Windows and Linux users.