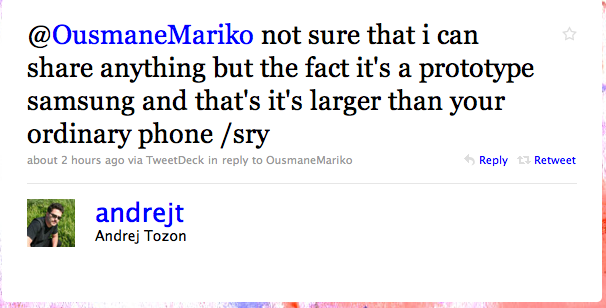 Inspired by Twitter’s Follow Friday, a similar trend was launched on Google+, called Circle Sundays, with recommendations on who to ‘circle’. Anna has already introduced us to 8 Latin American entrepreneurs to circle on Google+, so we thought we’d provide you with a similar list of standout members from the Middle East.

While Google+ has been slow to catch on in Middle Eastern tech circles, it can still count a few pretty impressive people among it’s users in and from the region. From bloggers to entrepreneurs to designers, there’s a huge variety of information to be had from keeping up with these prolific Google+ users.

Hailing from Jordan, Boston-based MIT graduate, Sami Shalabi is the co-founder of YallaStartup and is one of two Google staffers on this list. Securing a successful exit for his own startup, Zingku, which was acquired by Google in 2007, the software engineer is also a serial entrepreneur, angel investor and is on the advisory board of several MENA startups including Jordanian on-demand video site, Istikana. His Google+ profile is the perfect place to get an interesting mix of tech news, politics, photos and some Middle Eastern humour as well.

Egyptian Wael Ghonim is Google’s own Regional Product & Marketing Manager, but he’s currently on sabbatical, starting a technology focused organisation to help fight poverty in Egypt. He was propelled into the public eye after it was revealed that Ghonim was behind the Facebook page, We Are All Khaled Said, which played an integral role in organizing the protests in Egypt which eventually led to former president, Hosny Mubarak stepping down. Detained by Egyptian authorities for 10 days, while his family knew nothing about his whereabouts, Ghonim was released unharmed. Ghonim is a prolific poster on Google, and it’s no surprise. His profile is also a perfect example of just how responsive and interactive Google+ users have been so far. According to SocialStatistics, Wael is ranked as the 85th most popular user on Google+.

Jordanian born Roba Al-Assi describes herself on Google+ as a designer, blogger and Internet geek. Working for what is probably the Middle East’s largest job portal, Bayt.com, she also writes on her personal blog, And Far Away, where she keeps her readers entertained with amazingly varied topics from the serious, to the whimsical, to the fun. She’s also found the perfect way to drive traffic to her blog using Google+, by posting an excerpt and directing readers to read the rest of the article at And Far Away.

Currently based in France, Lebanese Joseph Ayoub is the founder and editor of WhiteZine, described as a “web magazine about inspiration.” The magazine covers the digital arts, as well as trends in fashion, design and architecture. With over 150,000 visitors per month, the magazine has been featured in prominent sites. By day, Joseph is the Social Media Marketing Manager at Gameloft. His Google+ profile is extremely reflective of both his day job and his magazine, with posts about photography, design, and of course about Google+. Joseph posts on Google+ in French and English.

Israeli Orli Yakuel, a web analyst, blogger and entrepreneur, is the brains behind Go2web2.0, one of the biggest web 2.0 directories available today. With every possible category available on the site, it’s a great source to keep up with new apps, as well as to find the perfect app to suit whatever needs you might have. Her Google+ profile is one of the first places to go on the social network for lively discussions about the latest tech news and apps, as well as a great source for the Google+ resources Orli is always quick to find. Her great posts have put her in the top 50 most ‘circled’ women on Google+, and is ranked 89th overall according to SocialStatistics.

Zamil Safwan a Telecom Consultant and Social Media Strategist is a partner at Jockey Electronics and founder of  Jade Electronics Industries and Amman Tech Tuesdays, the latter of which is one of the many examples of just how vibrant the tech community is in Jordan. Posting mainly in English, with a few Arabic posts every now and then, Zamil’s Google+ profile is an eclectic mix of tech posts, TV and music related posts, and more.

Iranian born, Alireza Yavari, Founder, Creative Director and UX Designer at Design Studio 23 in New York, is a great source for interesting photos, videos, and of course graphic design info. Clearly an avid Google+ user, he’s also the brains behind the Unofficial Google+ Recommended Users site, which provides crowd-sourced recommendations on bloggers, women in tech, photographers and several other categories, as well as some of the most impressive photography albums posted on the social network.

Do you have any recommendations of great Middle Eastern techies, bloggers and entrepreneurs we should circle on Google+? Let us know in the comments.