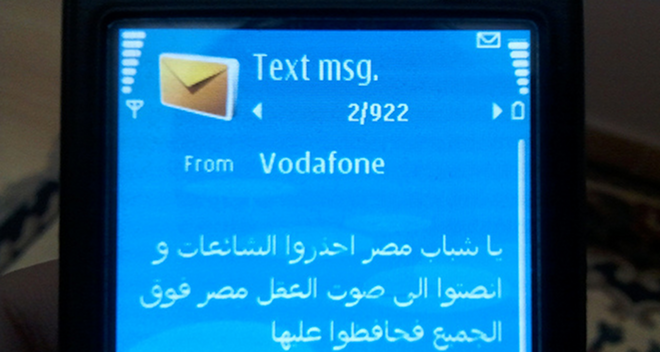 Vodafone has announced that it has been forced to send pro-government messages to its subscribers in Egypt.

In a short statement today, the network says that Egyptian authorities have been using emergency powers to instruct mobile networks Mobinil, Etisalat and Vodafone to send messages to the people of the troubled country since the protests began early last week.

These messages, published in translated form over at Liberal Conspiracy, include statements like:

“The Armed Forces asks Egypt’s honest and loyal men to confront the traitors and criminals and protect our people and honor and our precious Egypt.”

“Youth of Egypt, beware rumors and listen to the sound of reason – Egypt is above all so preserve it.”

Vodafone says it has no choice over the content of these messages, which are sent without any indication of their origin. Speaking out against the rule, Vodafone writes: “These messages are not scripted by any of the mobile network operators and we do not have the ability to respond to the authorities on their content.”

Vodafone says it has objected to the rule, stating: “Vodafone Group has protested to the authorities that the current situation regarding these messages is unacceptable. We have made clear that all messages should be transparent and clearly attributable to the originator.”

Vodafone seems to have been forced to defend itself after speculation online, including at this small Facebook group, questioned if the network was wilfully helping president Mubarak’s threatened regime.

Read next: Innovative but nerdy: The iPad jacket