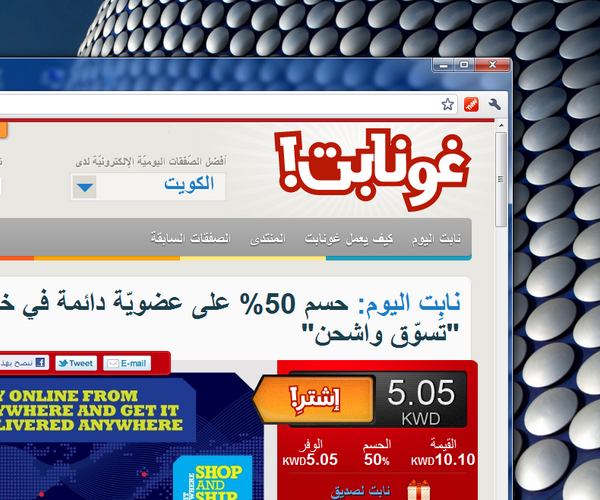 Just when you thought the people of Kuwait wouldn’t get any more attention this week, Dan Stuart swoops in to give them yet another moral boost. GoNabIt offered its first official deal to Kuwaitis: A discount on an Aramex Shop&Ship account.

We’ve following Dubai based GoNabIt ever since it opened it’s doors to the public back in May 2010. Kuwait City is GoNabIt’s 6th portal.

It’s providing for Dubai, Abu Dhabi, Sharjah-Ajman-Ras Al Khaimah in the UAE. Plus Amman and Beirut with Kuwait being the 4th country to get deals from the Bayt.com backed group buying service.

Ok so Stuart admits it’s not exactly a ‘local’ deal, but at least it’s a start that gives him bragging rights to being the first Group Buying site to provide for Kuwait’s buyers.

What made those methods impractical for a region wide service provider like GoNabIt is the fact Paypal isn’t supported in most MENA countries. Surprisingly there’s actually an online campaign & petition to urge Paypal to support Arab countries.

GoNabit has also changed its city selector making it a drop down menu to accommodate their city expansion from which you can choose only one city instead of the upper city bar in their old design.

So with this latest addition to the GoNabIt family the company now operates with a 19 strong team spread across the eastern part of the region with plans to expand to another 4 cities in Egypt, Lebanon, and 2 cities in Saudi Arabia during 2011.

Read next: Digitimes: Android will take Symbian's top spot in 2011