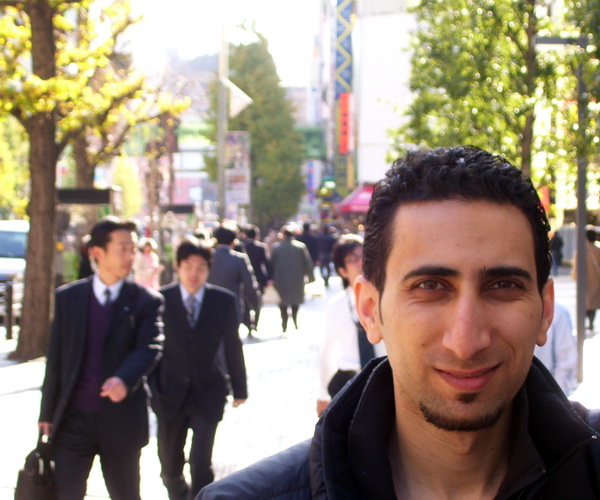 Ever since I went to MENA ICT Forum earlier this month, the results have surprised me. Meeting so many amazing people there has changed my opinion of the region and the direction it’s heading in. Thus I decided maybe it’s time to start a weekly series about Aspiring MENA Entrepreneurs. Let me know what you think.

Now I’m not saying I came across the world’s next Sergey Brin, Monther Abushaikh would probably object in his humorous way and tell me he’s too busy with whatever projects he’s working on to invent the next Google, but I know this guy is what MENA is made of. Pure potential.

If your from the Middle East then you should have heard of Ikbis, most MENA users label it as: YouTube with a Middle Eastern twist, Ikbis Content Executive Mohammad Jaradat prefers to call it a Media portal instead. Either way, Monther Abushaikh is revamping it.

Lead Revamper and acting CTO since it’s launch, Monther has led the development of Ikbis, and along with an amazing 8 strong team, making it MENA’s very own center of media gravity for images and video.

I’m not a shell power scripter, but once XKCD launched their uniXKCD I fell in love with the idea. So when I came across TwitterShell, a fun idea that provides a shell interface for twitter, I couldn’t stop telling my friends about it. To my surprise it too is a brainchild of Monther’s.

Sense a trend here? The guy doesn’t sit still, he got even more global traffic after he spent a month building Zoofs, the world’s first tweet based YouTube ranking service, launched by Jordanian Tootcorp with Monther as their CTO. Again.

One of Monther’s more promising projects was Bayarat.com the first Arabic Online Media Content Search Engine with a focus on video that attempted to solve the online Arabic media discovery problem, and did a good job at it. It’s just that dreams don’t fund web crawlers these days.

As unique as Monther may appear to be, his story is that of many. Innovative energy just waiting to get their chance to make the world a better place. We wanted to know more about him, so we asked him a couple of question via email and this is what he had to say:

Well, I am 27 years old, Jordanian, Graduated with a Bachelor of Science in Computer Engineering from Washington State University. My main focus was robotics. Actually, I have nothing to do with web development. When i came back to Jordan, i was struck with the fact that robotics simply don’t exist here. At that point, i realized i need to focus on something else. Got my first job as web developer in  d1g.com, two years later i moved to ikbis.com as CTO. Its been an exciting 4 years, worked on lots of services, some worked, some failed but the experience is amazing.

While working at ikbis, I noticed the lack of tools to find arabic video content on the internet. Most of the content were scattered between youtube, maktoob, d1g and ikbis. Finding a specific video is a complete nightmare. Bayarat was built to solve this issue. It was designed from the ground up by taking into consideration the arabic grammar and stems. It was by the far the most challenging project i’ve worked on.

My main issue was the lack of CPU processing power. Bayarat was running on 3 large amazon instances to crawl,fetch and index the web(which is really an insignificant number when we talk about crawling the internet). But for a single developer, the cost was little high. Tried everything to save cost. I even switched the entire system from ruby/python  to erlang/c++ to get a better performance. But at the end of the day it was a little too much for a single person/developer to handle so i killed it.

Nevertheless, i enjoyed every working hour i spent on Bayarat. Learned lots of things including erlang which we used to write zoofs.com. If i can get funding to focus and revive Bayarat again i will defiantly do it. I still believe its a great project that solves a major problem among the arab internet users.

How did Zoofs.com come to exist?

Zoofs went from “hey, look what i can with twitter/youtube api”  into a complete service in a crazy month. The service is growing slowly but steadily.

When we started we had a team of two working on Zoofs, Andi and myself. Currently I am maintaining the service and deploying couple of fixes every once in a while. Because Zoofs is mostly written in erlang we are having a hard time finding and hiring people to help in the development. Still, we have great hopes for it. Mashing and mixing different sets of data is always an exciting thing to do.

I’m not a Linux guy but love shell scripting, tell me about Tweetsh.com

Tweetsh is an example of a geeky fun project. I spend 70% of my time using the shell, so i thought writing a twitter shell would be the ultimate geeky experience to browse and interact with twitter. So i challenged myself to build it in 48 hours. The feedback was amazing upon the release. Received lots of emails ranged from people requesting new features to people offering to buy the code. I decided to release the code as an open source project.

Do you have any upcoming projects we should look out for?

I am currently working with 2 other developers in(abu dhabi and syria) on a service that leverage the checkin services used in the region. Its an exiting new project, very challenging. We need a month or so to go into the beta mode. I will keep you posted on any development.

Finally, creating your own startup is not an easy thing todo especially in this region. It’s extremely difficult to get funding, developers tend to avoid startups in the sake of having a steady salary option, so finding really talented people to join you is very challenging.

So there you have it, relentless in his determination Monther is heading into new domains after Bayarat didn’t work out. Some might say it was a failure, but at least he proved it can be done, successfully, even if it wasn’t self sustainable.

Know Someone Cool? Tell us about an aspiring Entrepreneur you know to cover on future posts of Aspiring MENA Entrepreneurs.