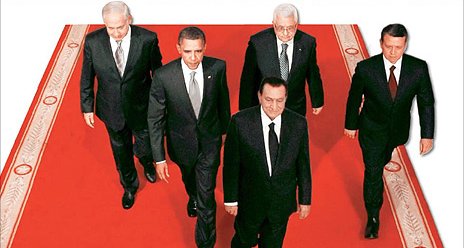 You must forgive the delayed notice, as most of our Egyptian readers are sore from, but we learned that Al-Ahram newspaper was caught red handed publishing a doctored image of Egyptian President Husni Mubarak leading heads of states into the recent Sham Al-Sheikh negotiations. Which he most certainly didn’t.

The incident earlier reported by every respectable publication in Egypt and the BBC not directly related to the web you might think, has turned into one of the most talked of topics on Facebook. Millions of users passing along the news that the Egyptian state run publication placed their Editor in Chief’s boss, His Excellency President Husni Mubarak leading all Presidents participating in the negotiations.

The original image however shows President Obama leading the group with Mr. Mubarak treading behind.

What’s most disappointing about this incident is that it’s probably the first time a regional newspaper of the size and popularity of Al-Ahram gets associated with a major technology like Adobe Photoshop, which our immaculate analysis powers have deduced they used, in an incident that clearly shows someone needs to introduce the Editor to Google Image Search instead.

Read next: Entering The Minority Report Era: A Video Series