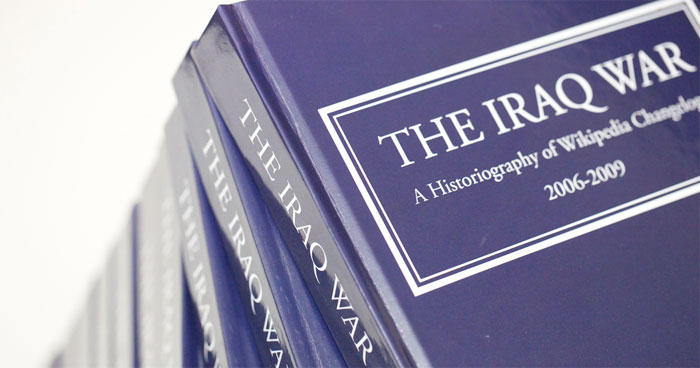 Author and online publishing connoisseur James Bridle has published every edit made to a single Wikipedia article, The Iraq War, during the five years between the article’s inception in December 2004 and November 2009, a total of 12,000 changes and almost 7,000 pages.

Originally reported by RRW today, the book amounts to twelve volumes: the size of a single old-style encyclopaedia. It contains arguments over numbers, differences of opinion on relevance and political standpoints, and frequent moments when someone erases the whole thing and just writes irrelevant offensive language.

The author tells us about the book in a blog post on booktwo.org describing an ingenious system to record every single piece of indefinitely valuable information that makes up the history in what he describes as: Historiagraphy, where he suggests not only Wikipedia, but everything should have a history button.

“This is what culture actually looks like: a process of argument, of dissenting and accreting opinion, of gradual and not always correct codification.” elaborates Bridle. “We need to talk about historiography, to surface this process, to challenge absolutist narratives of the past, and thus, those of the present and our future.”

The publisher chose Wikipedia because according to him “It’s not only a resource for collating all human knowledge, but a framework for understanding how that knowledge came to be and to be understood; what was allowed to stand and what was not; what we agree on, and what we cannot.” Which led to publishing a book to illustrate that.

Putting in paper form was because “Physical objects are useful props in debates like this: immediately illustrative, and useful to hang an argument and peoples’ attention on.”.

As far as innovative ideas go, I fell head over heal for this one. Containing all the ingredients to make a tasty tale for your avid fan of history and geekism at the same time, let alone the fact us bloggers are big fans of opinion. That have been said I do have my fair share of beef with it all.

The publisher describes this process as ‘utopian’ by explaining that documenting Wikipedia edits will allow to better “weigh truth” as appose to traditional history which he describes as “absolutist narratives of the past”. The author quite interestingly describes as Utopian, to create a oxymoron by neglecting the dominating culture of those editing the page.

Resulting in this collection of data being highly biased towards a perception of the war defined by a group more likely to be affected by the US Media machine than real facts produced on the ground. I wouldn’t go as far as to calling it Utopian, but this phenomenon is certainly to be observed, consumed and hopefully in the future referenced for a better understanding of how we shape our media, opinions, and history of mankind.

Read next: Nokia N8 Gets Confirmed Release Date and Pricing