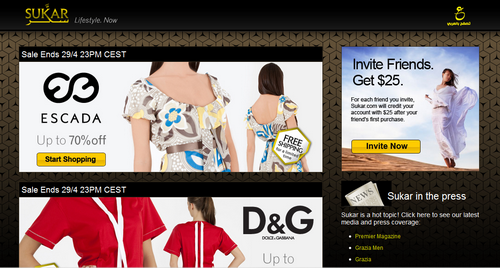 Sukar.com, the region’s première online private shopping club goes live to its exclusive society and we thought we’d let you see it through our eyes.

The design certainly reflects the nature of products being provided, and some of the deals do seem to be interesting.

Sukar.com has launched, and within its first week has announced a whopping 45,000 registered users, whom we have yet to see just how powerful their purchasing power is, and whether or not they will be enough to get the cash flowing.

This trend appears to be riding the rising economic growth after the global recession, a trend that has been successful in many other parts of world such as Markafoni in Turkey, Limango of Germany and Gilt of the US.

Given the success of this business model globally, expect to see more and more of these emerge in the region.