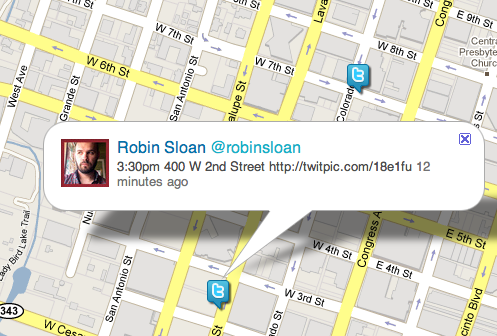 Twitter has just launched a rather cool way for geeks at South By South West to get hired by the company.

Twitter @ SXSW displays a map of where Twitter staff are in Austin. If you want to pitch yourself for a job with them, just see where they’re tweeting from and hunt them down. Nifty!

There’s even a tool to narrow down your options. If you’re good at ‘Supporting a global audience’, then @Trammell is your man for example.

The tool was announced by Twitter’s web engineering lead, Britt Seltvitelle. He wrote: “Just invented http://sxsw.twitter.com with @hoverbird and @k. We want you to work at Twitter! Use it to find us and say hi!”

The move comes as Twitter is in the process of rolling out a map and geotagging capability to its web interface. As yet it only works for users in the USA but should be available everywhere soon.