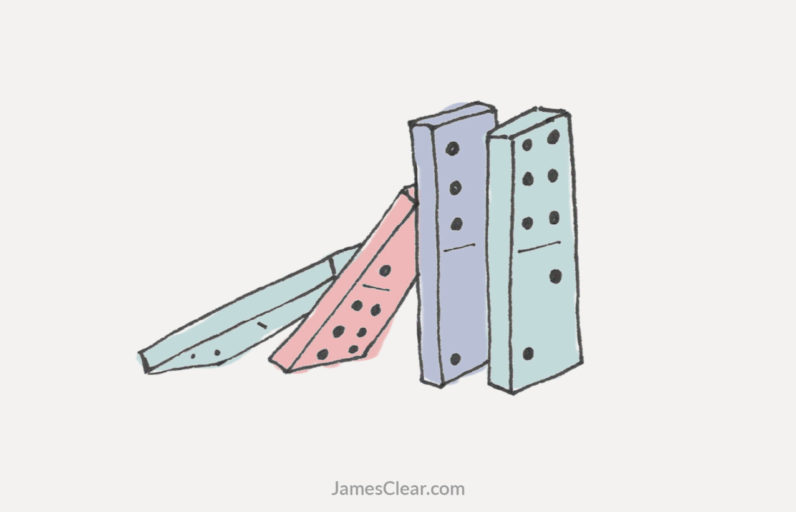 Human behaviors are often tied to one another.

For example, consider the case of a woman named Jennifer Lee Dukes. For two and a half decades during her adult life, starting when she left for college and extending into her 40s, Dukes never made her bed except for when her mother or guests dropped by the house.

At some point, she decided to give it another try and managed to make her bed four days in a row—a seemingly trivial feat. However, on the morning of that fourth day, when she finished making the bed, she also picked up a sock and folded a few clothes lying around the bedroom.

Next, she found herself in the kitchen, pulling the dirty dishes out of the sink and loading them into the dishwasher, then reorganizing the Tupperware in a cupboard and placing an ornamental pig on the counter as a centerpiece.

She later explained, “My act of bed-making had set off a chain of small household tasks… I felt like a grown-up—a happy, legit grown-up with a made bed, a clean sink, one decluttered cupboard, and a pig on the counter. I felt like a woman who had miraculously pulled herself up from the energy-sucking Bermuda Triangle of Household Chaos.”

The Domino Effect states that when you make a change to one behavior it will activate a chain reaction and cause a shift in related behaviors as well.

For example, a 2012 study from researchers at Northwestern University found that when people decreased their amount of sedentary leisure time each day, they also reduced their daily fat intake. The participants were never specifically told to eat less fat, but their nutrition habits improved as a natural side effect because they spent less time on the couch watching television and mindlessly eating. One habit led to another, one domino knocked down the next.

You may notice similar patterns in your own life. As a personal example, if I stick with my habit of going to the gym, then I naturally find myself more focused at work and sleeping more soundly at night even though I never made a plan to specifically improve either behavior.

In the words of Stanford professor BJ Fogg, “You can never change just one behavior. Our behaviors are interconnected, so when you change one behavior, other behaviors also shift.”

Inside the Domino Effect

As best I can tell, the Domino Effect occurs for two reasons.

First, many of the habits and routines that make up our daily lives are related to one another. There is an astounding interconnectedness between the systems of life and human behavior is no exception. The inherent relatedness of things is a core reason why choices in one area of life can lead to surprising results in other areas, regardless of the plans you make.

Second, the Domino Effect capitalizes on one of the core principles of human behavior: commitment and consistency. This phenomenon is explained in the classic book on human behavior, Influence by Robert Cialdini. The core idea is that if people commit to an idea or goal, even in a very small way, they are more likely to honor that commitment because they now see that idea or goal as being aligned with their self-image.

Returning to the story from the beginning of this article, once Jennifer Lee Dukes began making her bed each day she was making a small commitment to the idea of, “I am the type of person who maintains a clean and organized home.” After a few days, she began to commit to this new self-image in other areas of her home.

This is an interesting byproduct of the Domino Effect. It not only creates a cascade of new behaviors, but often a shift in personal beliefs as well. As each tiny domino falls, you start believing new things about yourself and building identity-based habits.

The Rules of the Domino Effect

The Domino Effect is not merely a phenomenon that happens to you, but something you can create. It is within your power to spark a chain reaction of good habits by building new behaviors that naturally lead to the next successful action.

There are three keys to making this work in real life. Here are the three rules of the Domino Effect:

1. Start with the thing you are most motivated to do. Start with a small behavior and do it consistently. This will not only feel satisfying, but also open your eyes to the type of person you can become. It does not matter which domino falls first, as long as one falls.

2. Maintain momentum and immediately move to the next task you are motivated to finish. Let the momentum of finishing one task carry you directly into the next behavior. With each repetition, you will become more committed to your new self-image.

3. When in doubt, break things down into smaller chunks. As you try new habits, focus on keeping them small and manageable. The Domino Effect is about progress, not results. Simply maintain the momentum. Let the process repeat as one domino automatically knocks down the next.

When one habit fails to lead to the next behavior, it is often because the behavior does not adhere to these three rules. There are many different paths to getting dominoes to fall. Focus on the behavior you are excited about and let it cascade throughout your life.

James Clear writes at JamesClear.com, where he shares self-improvement tips based on proven scientific research. You can read his best articles or join his free newsletter to learn how to build habits that stick.

This article originally appeared on JamesClear.com