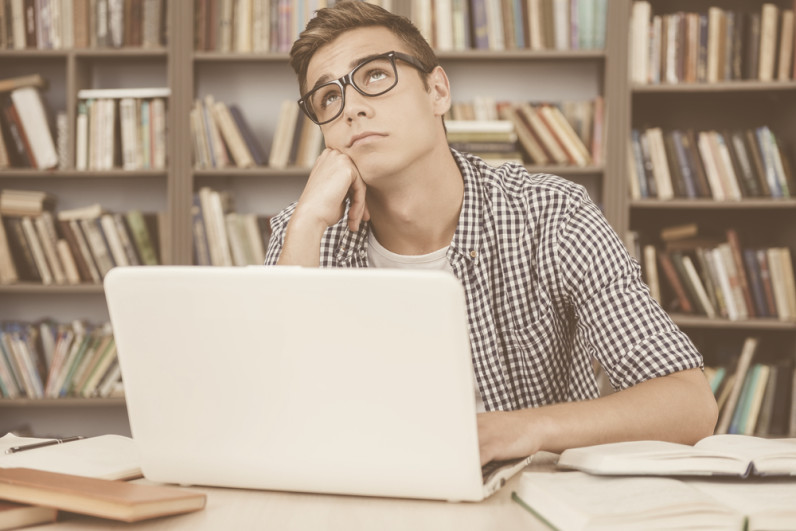 For the writer wanting to focus on their work rather than Twitter, there’s a plethora of internet-blocking software offering ‘distraction free writing’. There’s even a writing gadget to help people shut out the social media mind clutter.

Coming to a hipster bar near you, the Freewriter is a retro-styled electronic writing machine without Wi-fi. A typewriter with a plug essentially.

But why, if we claim to love writing should we need distraction-free gadgetry in the first place?

Rather than becoming distracted by researching the best distraction-free apps, is there anything we can do to retain focus until we reach the end of our project?

Fortunately, Professor Paul Dolan (AKA Professor Happy) from the London School of Economics can help. He’s spent his career looking into what makes us chipper and productive and his book Happiness by Design, offers some refreshingly psychobabble-free advice on what we should do.

For Dolan, activities that make us happy are either pleasurable or purposeful in nature.

Having a creative pursuit like writing sits firmly in the ‘purposeful’ category alongside raising kids, studying for a qualification or learning to play jazz guitar.

These activities can make us happy but not always in the short term or in the same way that boogieing the night away at a wild party might.

Putting off the purposeful

According to Dolan, people rarely procrastinate about wholly pleasurable activities – and when you think about it that’s true. You don’t tend to get distracted from having that third glass of red wine because you feel the sudden urge to order your paperclips or flick though the out-of-focus holiday snaps of a Facebook pal.

We don’t put off pleasurable activities in a way that we do purposeful ones.

While Dolan doesn’t explain why this is, we can probably hazard a guess that it’s something to do with how immediately demanding or rewarding an activity is.

Hedonism is pretty easy and the devil has all the best tunes.

However, Dolan explains how damaging it can be to our overall happiness levels when we constantly become distracted from activities that can give us flow – a sense of feeling lost and completely absorbed in a task. Something we gain great happiness from in the long term according to the man who coined the term, Mihaly Csikszentmihalyi – who we’ve written about before.

Today, the average American spends 11 hours a day gazing at digital devices and checks their smart phone 150 times per day.

According to Dolan, this distraction is damaging because it involves switching costs. The idea is that like petrol in a tank, humans only have a finite amount of attention and focus they can give to things during a given day. Every time you switch to a new task – even if it’s just quickly reading a Tweeet – depletes your reserves.

All this makes multitasking enemy number one for productive creativity and happiness. Dolan cites an academic study involving over two hundred students being asked to solve a Sudoku puzzle and a word search in a fixed time. The students were randomly assigned to one of three groups.

In the first group they were forced to multitask between the different activities; in the second, they were able to choose which task to do when, while in the third, tasks were presented sequentially.

The scores were marked and the first group scored far lower than the second and particularly the third groups.

While multitasking can make people feel as though they’re being super-busy and productive (presumably why people keep doing it) they’re really not.

While it sounds far less glamorous, doing one task after another in a slow, tortoise-like way is far more beneficial to our overall productivity and happiness than trying to do lots of things at once.

But what if life simply doesn’t allow you to work in such a methodical, sequential way? In that case, Dolan prescribes choosing to take regular breaks from purposeful work. He suggests that mixing up pleasurable activities with more purposeful ones can work for our long-term productivity – but only if those breaks in our work are made on own terms.

When you’re fully in the zone with your creative project you probably won’t want to break off and check Buzzfeed headlines. But when you do, that probably means you might be getting tired and your concentration is starting to wane.

If so, according to Dolan, it’s time make a deliberate choice to switch to whatever immediately pleasurable activity floats your boat – like playing CandyCrush for a while.

Do that activity for a short burst of time until the fun starts to wane, then switch back to the purposeful task. (For productivity geeks, this is very much the principle behind the Pomodoro technique which involves working in 25 minute bursts separated by breaks).

Unlike multitasking, the key here is to take control of your attention, notice when an experience becomes less pleasurable or all-consuming and act accordingly. It’s also about deliberately developing the structures around you to prevent general mind wander.

To this extent, the secret of defeating distraction seems to be to cheat it.

If you wait to become distracted then your reserves of concentration will become depleted fast. If you act beforehand then they’ll reduce far more slowly. If you know that CandyCrush is the pleasurable mind-gum you turn to when your purposeful writing project becomes tiring, you’ll be less likely to get lost down that internet worm hole of amusing cat pictures.

Treat your attention span like a scarce resource that everyone (including you) is competing for. After all, those pokes and pop-ups aren’t there by chance.

Hipster typewriters might work if that’s your thing but more important is learning how to control your attention – before it controls you.

Read next: Add 64GB to your MacBook with TarDisk drive expansion