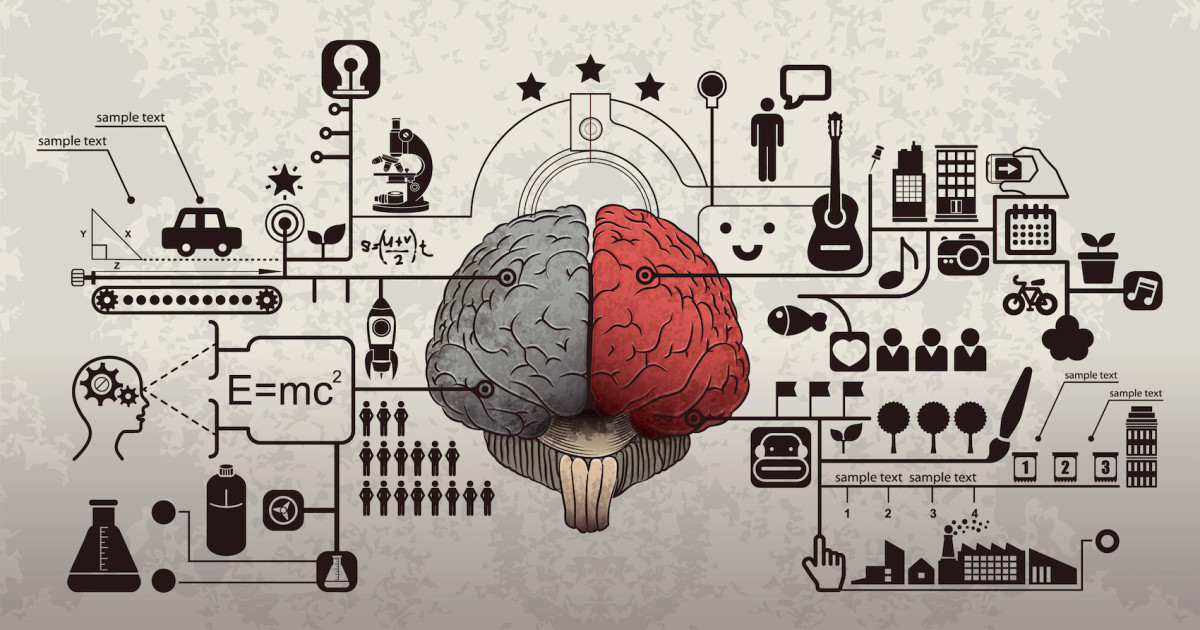 The longer you live, the more you realize that the difference between success and magnificent failure lies in how well you understand people. If you’re like many, that fact makes you regret not having studied psychology. I hate to be the one to tell you, but holding both a BSc. and an MSc. in psychology – yep. You missed a lot.

And yes, I am analyzing you as you read this.

But there’s good news, too. You don’t have to attend lectures on multivariate statistics, neuroscience, or early childhood development to learn about what makes people tick. There are dozens of excellent books on human psychology that will get you an education without a semester’s-worth of classes.

The following seven truths are what I consider the most valuable things you can learn from the past few decades’ best books on brains. They’ll offer you some insight into why you make decisions the way you do, what that potential client is thinking, and why you should worry about your slightly sinister boss.

1. You’re irrational (but that’s okay – if you know how to handle it).

Most of us assume we are rational decision makers, but in the last 10-15 years many books have challenged this assumption. One of the most notable among them is Nobel Prize winner Daniel Kahneman’s Thinking, Fast and Slow. Kahneman shows that a vast majority of our decisions are made in seconds and based on emotions and intuition – a fact that leads us into traps and makes us vulnerable to manipulation and poor choices.

Of course, your irrationality isn’t always a handicap. Malcolm Gladwell explains in his now-famous book, Blink, that intuitive decision-making can help us do what we’d never be able to manage without it. Take the gaze heuristic for example.

It’s a simple shortcut in decision-making that takes us outside rational thinking to act faster than our minds can process. It’s the gaze heuristic that allows athletes to perceive a baseball flying through the air and move to catch it without doing any serious mental calculations. It’s knowing without knowing – irrationality at its best.

Take it to work: People used to have time to make “cold decisions,” – fully processed choices based on reason and logic. Today, with rapid protoyping and agile development trends spilling over into all aspects of business, what social psychologists call “hot cognition” is the norm. Knowing that your hot cognition will be governed by your irrational mind, start to practice making hot decisions like you would cold ones. If Xbox and adventure sports aren’t your thing, even simpler timed games, like mobile-device-based word searches, can begin to train your mind to make good choices faster.

2. You underestimate the role of chaos and luck.

Nassim Nicholas Taleb wrote The Black Swan and Fooled by Randomness to address that we humans a) tend to underestimate just how much chaos defines our lives, and b) use hindsight logic to explain whatever happened, even if it was based on chance. So, if the universe runs on chaos, doesn’t that make a panoply of everyday acts of trust incredibly risky? The answer is yes. Allowing a broker to put your savings in the stock market, for example, is quite a risk. After all, take a long look and you realize that what they do is mostly gambling.

Just as irrationality isn’t always a bad thing, randomness can work in your favor, too. In The Wisdom of Crowds, James Surowiecki suggests that sometimes the best thing we can do is trust to collective judgment. Studies like those of social psychologist Gerd Gigerenzer show that if you want to invest smart, you might be better off asking random people about which brands they know and putting together an investment portfolio based on their answers.

Gigerenzer’s studies indicate that such a seemingly haphazard approach gives you a better chance of good returns than would handing over your savings to that sleazy Wolf of Wall Street guy.

Take it to work: Don’t be afraid to crowd-source solutions. Poll another department on how they’d solve your problem, or ask your customers what they think about your product’s new feature.

That we take talent to be the main predictor of success might have to do with our tendency to seek cause and effect. However, many studies have shown that talent isn’t essential when it comes to excelling in life and work. Gladwell’s Outliers, Talent is Overrated by Geoff Colvin, or Cal Newport’s So Good They Can’t Ignore You show that while talent is helpful, it’s never the be-all, end-all.

We’ve already established that luck has a lot to do with our perceived successes – why else would the month in which they were born be a good predictor of ice-hockey players’ eventual success? In Outliers and Mastery, the writers take it a step farther to explain that success is mostly about gaining experience, practicing, and achieving mastery of a skill. What does all this mean? Simply, that (a lack of) talent is no longer an excuse not to try to succeed at what you want to do.

Take it to work: We talk a lot about time versus talent  on Page19, and it always boils down to this: talent is 90 percent made, not born. Pick where you want to excel and get to work.

4. Negativity is in your nature, but you can change that.

In his How the Mind Works, Stephen Pinker explains that, from an evolutionary perspective, it makes sense for humans to be negative creatures. Pricklier emotions like fear and anger rescued us from predators and enemies. Meanwhile, positive feelings such as gratitude and pride were the evolutionary deadbeats – nice to have lying around, but not doing a whole lot to aid in survival.

On the other hand, researchers are now realizing that people tend to live longer, more fulfilled lives when they’re happy – even dodging disease due to it. Positive emotions might not have been critical for our caveman ancestors, but for the modern day office worker, happiness is key. In her book Positivity, Barbara Frederickson shares the recipe for a happy life: 3 times as many positive emotions as negative ones. According to positive psychologist Martin Seligman, author of the book Learned Optimism, even the most negative person can get happier (or at least closer) with simple exercises like writing gratitude letters or meditation.

Take it to work: Are you in a leadership position? Knowing you have a natural tendency to be negative isn’t enough – realize that your team does, too. Investing in their happiness pays off in productivity and retention and the best way to do it is listen. Start asking smart questions about how they’re doing at work. Our friends at Inc.com provide a nice list here.

5. You actually love working (but might not know it yet).

Flow is a many splendored thing. In his classic book on the concept, Mihaly Cziszentmihalyi describes flow as the state in which we lose track of time and enjoy being in the moment. Because it strikes the perfect balance of pleasure and progress, flow is the final frontier in working well.

According to Daniel Pink’s Drive, humans are built with this neat feature called intrinsic motivation – a zeal to do something due to a feeling of internal satisfaction. Intrinsic motivation is natural to humans: we are predisposed to perform, to work, and to tackle problems.

We can see it in our primate ancestors, who actually enjoy solving puzzles without any external reward or other reasons to do it. So why do so many of us perceive work as drudgery, not play? Neil Fiore’s The Now Habit explains that we’re trained to lose our joy in work at school and by our parents. But with the right mindset, there’s no reason you can’t revive your inner child and start enjoying what you do again.

Take it to work: Want to get into the flow state? The best things you can do for yourself are to get focused and avoid interruptions. Find out what works for you when you work and put yourself in the right environment. The rest has to do with matching the task with your skill level (a little challenge is usually the best standard), and having clear goals.

6. Focusing on the Now is the key to both productivity and happiness.

So, why is flow so hard to harness? It means abandoning everything but the “now” and focusing on the task at hand, something that’s quite difficult for most people. It’s worth it to try to get there, though. The closer you can come to complete in-flow focus, the more you will get done, and the happier you’ll be.

Take it to work: In the previous section, I said “get focused” and avoid interruptions to achieve flow, but it’s hard to start there if you’re not sure how focus feels. According to Barbara Frederickson, the best way to both get happier and learn to focus on the Now is through developing a meditation habit. Consider this: instead of that afternoon coffee break, go somewhere quiet – even if it’s only for five minutes – and concentrate on your breathing and, if possible, nothing else. No, it’s not meditation, but it’s a simple exercise to start.

7. Charisma holds a lot of power over you  – and your boss might actually be a psychopath.

Even the earliest self-help books such as How to Win Friends and Influence People note that the impression you make on others is one of the most powerful tools in your kit – and in that of others. Others, like psychopaths. As it turns out, it’s charisma, not handcuffs and diabolical plots, that will often bring you into a psychopath’s field of influence. These people tend to have high amounts of charisma and know how to use it.

According to books such as Snakes in Suits and The Wisdom of Psychopaths, psychopaths often end up in positions of power due exactly to this magnetism. Your concern regarding your ex boss-zilla and his hunting trips might not be so farfetched.

So, what is it about charisma we find so very tantalizing? In The Charisma Myth, Olivia Fox Cabane tells us that what actually wins over others is giving off the impression that you’re powerful (wealthy, strong, or influential) and will use your power to help them. But that’s just one type of charisma – leading with warmth is also an option. The simplest, soundest advice on upping your charisma goes back to Carnegie’s classic and is just one word long: smile.

Take it to work: You can’t truly fake charisma unless your brain accepts it, but this is one instance in which it’s nice that your brain is easy to fool.  A trick to feel and exude more confidence before your next presentation is to imagine yourself puffed up like a powerful animal – try a gorilla or a lion. Our brains have a faster response to images because they hit the limbic brain faster than the reasoning cortex: they can make a quick change to your body language and make you feel and appear more charismatic.

Now, you’re filled in on all the key psychology concepts you missed while you were busy studying something else. I hope you learned something about the mind you can use in your everyday life – even if it is only adopting a gorilla as your new pre-presentation spirit animal.

Read Next: The psychology of simple