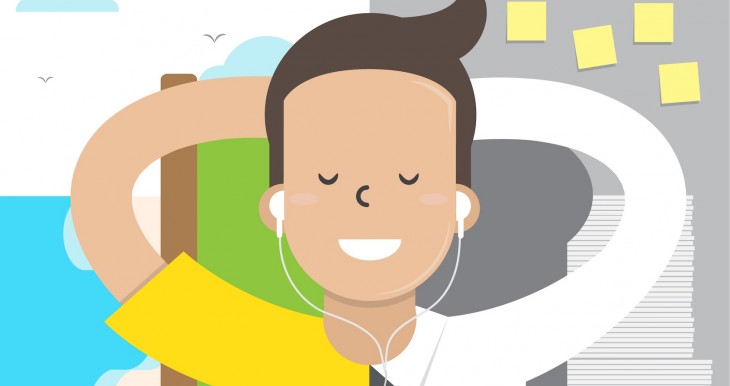 Like most of us, you want to improve your personal and professional life and think about the things you could do to get there. But (like most of us) rather than working towards those goals the second you get home you post up in front of the TV and binge on Netflix.

While you’re sure to feel a twinge of guilt as you reach your sixth episode of The Fresh Prince of Bel Air, modern research shows that this ‘wasted time’ can actually be beneficial. Things like watching reruns, playing video games, and even larping can have positive impacts on our mental health and personal development.

Here’s just a few ways that you can make the most out of wasting your time:

We all have those shows that we can watch over and over again. Far from being a mind-numbing exercise one University of Buffalo study has shown that watching your favorite reruns can actually restore your mental energy.

The theory relates to the idea that self-control and willpower are limited resources that we use up when we work on important projects rather than play Destiny with our friends online.

“With enough time, these mental resources will return,” says Jaye Derrick, lead researcher of the UB study. “However, there may be ways to more quickly restore them.”

Derrick says that re-watching loved TV shows and movies can restore our mental energy and willpower because we find comfort in our surrogate relationships with our favorite characters.

Re-watching TV episodes requires little-to-no mental energy on our parts (which, admittedly, is one of the reasons watching TV receives so much criticism in the first place), yet we enjoy spending time with the show’s characters. The amount of enjoyment we get from this activity, coupled with the lack of energy it requires, can help us gain back our mental energy and willpower more quickly.

Play video games to improve your reasoning and problem solving

Whether you’re playing Geometry Wars or Far Cry, a number of studies have suggested that playing video games can improve both your ability to solve problems as well as you reasoning skills.

In several studies reviewed by the American Psychological Association (APA) it was found that playing video games not only improves children’s problem-solving and reasoning skills but also strengthens cognitive skills like memory and spatial navigation.

Surprisingly, the APA found that such improved mental processes were especially noticeable when the subjects played shooter video games (think COD or Battlefield). These games improve your ability to think about objects in three dimensions and do so just as well as educational courses created to improve this same kind of perception.

Improved cognitive functioning isn’t limited to children. Separate research suggests that adults who play video games have stronger problem-solving and reasoning skills and may be able to process information more quickly. In one study, it was even found that surgeons who game are more skilled at completing certain kinds of surgeries than those who don’t.

Use your guild raids to learn leadership skills

In addition to playing video games in general, playing World of Warcraft or similar MMORPGs (massively multiplayer online role playing games), has been specifically shown to enhance a unique skill set: your ability to lead.

A big part of being a successful MMORPG player is the ability to solve problems, work as a team, and plan strategically. Research has suggested that those who play these types of games might make better employees due to their ability to transfer these skills out of the world of the game and into the office.

As Kate Cox from Kotaku humorously points out, knowing how to be on time for your guild raid and how to work with other team members can also help you be on time and work well with others in the real world.

Explore your emotions through larping

If you’ve never heard of live action role playing (or larping), you can think of it like a semi-impromptu, unscripted play where participants dress as characters and pretend to be in alternate worlds, realities, or time periods.

While researching her book, Leaving Mundania: Inside the Transformative World of Live Action Role-Playing Games, author Lizzie Stark noticed that larping can often allow participants to explore different aspects of their emotions.

In an article she wrote for Psychology Today, Stark explains how “the yearning to experience personal emotion is one of the hallmarks of the larp movement today”.

Many people who larp want to experience the thrill of battle, live out a romantic scenario, or even experience the loss of a friend—emotions and experiences we rarely have the chance to deal with in our everyday lives.

Since our emotional intelligence can influence everything from our decision-making processes to our abilities to empathize with others, larping can be a great way to connect with your emotions.

If jousting in a park isn’t your thing, it’s worth noting that other forms of role playing can be just as emotionally beneficial. Psychologists have used role-playing exercises for decades to help clients cope with topics that are otherwise difficult to talk about. By encouraging people to act out an unfamiliar scenario, psychologists can often help clients gain insight into their own emotions and motivations, as well as those of others.

Regardless what kind of role-playing you do (if any), take pride in knowing that such changes in perspective can be emotionally healthy and insightful.

Reap the benefits of laughter

Whether you’re watching stand-up comedy on TV or cat videos on YouTube, studies have shown that laughing can do everything from relieve stress to boost your immune system.

One Oxford University study even found that laughing is an effective treatment against pain. Across a series of experiments researchers found that people who either participated in comedy or watched comedy had higher pain tolerances than subjects who didn’t.

Additionally, the experiments showed that laughing as a painkiller is dose related: the more you laugh, the less pain you feel. This is because genuine laughter causes your brain to release endorphins, which can produce a euphoric effect and numb pain (as well as lower the amount of the stress hormone cortisol in your blood steam).

Of course, you should probably get off Reddit for a few hours a day to do things like shower and go to work, but if you want to spend part of your evening in the r/aww or r/funny subreddits, there are worse ways that you could be spending your time.

All of us need time to tune out and relax. and trying to keep your mind busy and productive every waking second of the day is the easiest way to burn out. As big of an advocate for continued self-improvement as I am, I have to admit that we all need to occasionally just waste some time.

Of course, moderation is key here, and doing any of these activities for a week straight won’t give you any added benefits. Rather, this ‘wasted time’ should become another part of your balanced, healthy life.

Play some video games or organize a stand-up night at your office. Re-watch Friends or see how extensive your larping options are.

However you decide to waste your time, don’t feel bad about it. We all deserve some unstructured down-time every now and then.

Read Next: The reason you’re not happy (and how to fix it)

Read next: The secrets to successful kickoff meetings