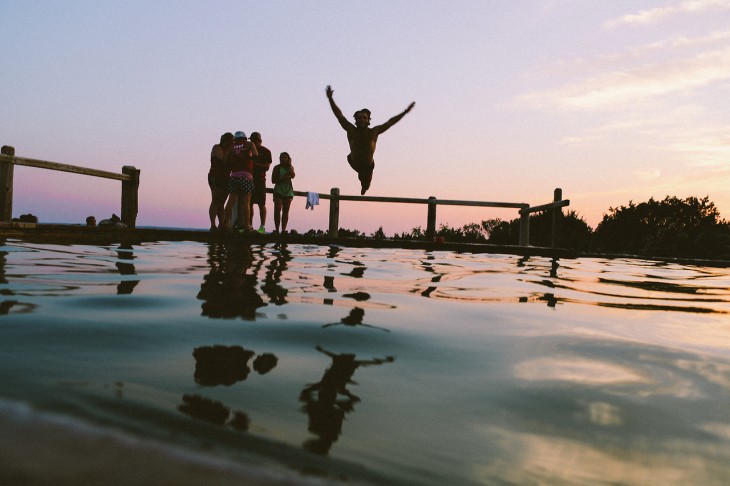 The story “The Little Engine That Could” really ticked me off as a child. There were oceans between how that train felt and how I felt. The engine’s positive attitude annoyed the living daylights out of me.

What was it so sure about? Why was it so certain it could do anything? That train should have more realistic expectations…

Self-doubt, not just for humans

When I was researching this article, I was primarily focused on how people experience self-doubt, as humans comprise the largest percentage of my readership (followed closely by my cat). It turns out what was once thought of as a uniquely human trait can also be experienced by some animals.

Apes who incorrectly guessed on a task (which paper towel tube was the food located in), consistently questioned their memory when they were given the opportunity to perform that task again. When given this chance, the apes would continue to re-check their answer as they doubted their ability to remember in which tube the food was in.

This wasn’t the only study to identify self-doubt in primates either, another study in 2011 came to a similar conclusion. It turns out that certain animals know when they don’t know, and that’s amazing.

It shows that we aren’t alone in experiencing self-doubt and that self-doubt itself may serve a real practical purpose, guiding behavior.

Where does self-doubt come from?

The old “self” word. What a tricky little bugger.

There’s no part of the brain called “self-spot” so we can’t just look at that and make a series of extrapolations. Our entire brain works together to create our sense of self. There isn’t just one thing we can point to, to explain self-doubt. What we do know is this, we all experience it through out our lives for various reasons and some of us experience chronic self-doubt.

Self-doubt is the kind of like the opposite of what known as self-efficacy. That’s the belief that you can successfully use your skills and abilities to achieve a desired result.

First, we have a fear of failure

Ah yes, trusty fear of failure I knew you would rear your head. For some of us, our fear of failure is so strong that we engage in self-protective behavior, like self-handicapping.

When we self-handicap we are trying to put as much distance as possible between ourselves and possible failures. These individuals don’t want to be able to say, “This failure is due to my abilities.”

Instead, people handicap their performance by procrastinating or limiting how much effort they put in. While this kind of behavior may limit exposure to failure, it also increases self-doubt.

Second, is our inability to express our desired self

People think that self-doubt comes from dissatisfaction with who we are right now, but recent research has called that presumption into question. Instead, they believe it comes from a disconnect we feel our desired self. All of us have what is known as a possible self and desired self:

Possible self: Mental representation of all your hopes and fears (could be anything).

Desired self: These are realistic goals you can actually see yourself achieving. Your desired self provides you with powerful incentives to pursue future opportunities and obtain goals.

What the researchers found was that people with a strong desired self had less self-doubt. Their actions were highly organized, energized, and guided by the goals they wished to achieve. This gave the individuals in the study the power to sustain their self-confidence over time, even if there was some doubt present.

Individuals who lacked this strong desired self were unable to sustain or believe that they possessed the competency to achieve their goals—that my friends, is self-doubt. That isn’t to say that we don’t have a strong desired self at our core, it just means we may have difficulty articulating those feelings into goal directed behaviors.

The good news? You can overcome this.

I’ve read a veritable crap ton of articles about how to banish self-doubt, how to be rid of it from your life for good. The desire to get rid of unpleasant experiences and sensations is one I can relate to all too well. I haven’t listened to a voice message in five years for that very reason.

Still, I understand that self-doubt serves a real, functional purpose.

You’ll never banish self-doubt for good and any article that tells you that is lying. What you can do is get your self-doubt into check. Like any feeling or emotion we have, you never want to feel all one way or another. There has to be balance.

For a long time, people assumed that more confidence meant better performance. Those people were wrong. Too much self-confidence can result in a lack of effort and can make you more prone to making mistakes.

So how do we find a balance between having some self-doubt and being overwrought with it?

Use self-doubt to motivate

I am guilty of believing that I have to listen to every whim of my mind, to each voice inside my head. When I let these thoughts go unchecked, that’s when my self-doubt begins to have negative consequences.

Many creative people use their self-doubt to energize them, some even believe that without it, they wouldn’t be able to create anything at all.

“If you hear a voice within you say you cannot paint, then by all means paint and that voice will be silenced.” ― Vincent van Gogh

“The greater the artist, the greater the doubt. Perfect confidence is granted to the less talented as a consolation prize.”— Robert Hughes

There’s a kind of sizzling energy that self-doubt gives me. It’s really about acknowledging the self-doubt in your head, admitting that it exists, and then moving on with your goals anyway.

Before you begin a task, acknowledge what you are good at. It may sound silly, but research shows that this actually helps you combat self-doubt. Root yourself in what you are confident in. Then, make a plan for what you want to accomplish.

When I write without an outline, my self-doubt runs amuck because I have no structure. Working with an outline, having those clearly defined goals, helps me direct my actions. Try using the SMART technique:

Once you’ve made your plan, let those who you trust and admire know about it. We put so much of ourselves into your work that it can be impossible for us to realize (without a little help from others) that we are not the sum of our work.

If you write an article, it is not the totality of who you are. Creating a website is not the definitive moment of your life. It just feels that way to us. Involving other people, helps you keep that in perspective and help keeps you on track.

Self-doubters spend a lot of time thinking about self-doubts—I know big shocker. We want to know definitely what our strength and weaknesses are, because we assume that this will make us better somehow, that this will decrease our likelihood of failure. That’s how self-doubt perpetuates itself.

At some point, you’ve got to ask yourself what it’s worth to you? What is your self-doubt costing you and is the price too high? Is it worse to try and fail or to not try at all? This is what you must come to terms with.

There comes a time when you have to stop thinking and start doing. Extend yourself beyond your comfort zone for a little bit. If self-doubt is a cycle, than it is one that can be broken. You break it by doing something, by taking clear, and directed action for yourself.

I suppose I disliked “The Little Engine That Could” so much is because it never seemed realistic. I just didn’t buy into the ‘believe in yourself 100 percent’ message and the ‘you can do anything’ bit. I’m not afraid of a little self-doubt, I’m just afraid of it overtaking me, of it dictating my actions instead of the other way around.

You don’t need to worry about eradicating self-doubt. All you have to do is keep it in check.