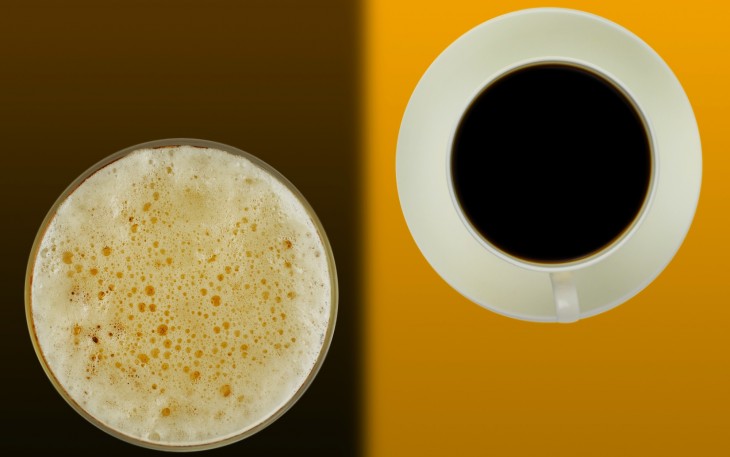 
I didn’t know what I was going to write about today.

When this happens, normally I grab a coffee to help get the ideas flowing, but for the last few days in Montreal, no one’s been allowed to drink the water due to a bacteria leakage, which also means, no coffee.

So instead, I grabbed the next best thing to help me get going – a beer.

This got me wondering about coffee and beer and which one would actually help me be more creative and get work done. Hopefully, this will help you decide when it’s best to have that triple shot espresso or ice cold brew.

What is creativity really?

From a scientific perspective, creativity is your ability to think of something original from connections made between pre-existing ideas in your brain.

Adenosine is kind of like your brain’s battery status monitor. Once your energy levels get low, adenosine starts to slow your brain functioning down.

This is why after a few hours of intense work, you begin to feel tired, like your brain has run out of juice.

The only way to recharge it is to take a break; unless, you’ve got a secret weapon handy.

Your brain on coffee

Every coffee drinker is familiar with the feelings after drinking a fresh cup of java.

I know after I’ve had a latte or espresso, I feel more focused.

If I’m having a conversation with someone, words seem to flow without pauses, ums, or ahs.

This happens because caffeine blocks adenosine receptors, preventing adenosine from binding to it’s receptors and tricking your brain into thinking you have lots of energy.

Here’s a comic illustration of what caffeine does when it makes it to your brain:

This effect happens within just 5 minutes of drinking your coffee.

When adenosine receptors are blocked, chemicals that increase the performance of your neural activity, like glucose, dopamine, and glutamate, are allowed to work overtime.

So while you may feel that coffee is giving you more energy, it’s simply telling your body that your energy reserves are good to go even when they’re long gone.

The peak effect of caffeine on your body happens between 15 minutes and 2 hours after you consume it.

When caffeine from your coffee enters your bloodstream, you become more alert from an increase in the production of the hormones adrenaline and cortisol.

The problem is, if this over-stimulation of adrenaline and cortisol occurs too regularly, your adrenal glands, which absorb adrenaline to help make you feel energized, gradually begin to require more adrenaline to give you the same ‘pick-me-up’ feeling as before.

When researchers at Johns Hopkins University looked at low to moderate coffee drinkers (as little as one 14-ounce mug per day), they found that even this little amount of coffee can cause your body to develop a tolerance to caffeine and require more of it to get the same stimulation.

Just like the thrill of lighting a bottle rocket and watching it explode all within a few seconds, the good feelings associated with coffee are short-lived and pretty soon you need another hit to feel good again.

While caffeine pulls a number on your brain to make you feel like you have more energy, alcohol has it’s own way of influencing your creativity.

After you’ve had a couple beers, drinking makes you less focused because it decreases your working memory, and you begin to care less about what’s happening around you. But as researchers at the University of Chicagodiscovered, this can be a good thing for creativity’s sake.

The researchers devised a game where 40 men were given three words and told to come up with a fourth that could make a two-word combination with all three words.

Half of the men drank two pints of beer before playing the game while the other half drank nothing. The results showed that men who drank, solved 40 percent more of the problems than sober men.

It was concluded that a blood alcohol level of 0.07 (about 2 drinks) made the participants better at creative problem-solving tasks but not necessarily working memory tasks where they had to pay attention to things happening in their surroundings (like driving a car).

By reducing your ability to pay attention to the world around you, alcohol frees up your brain to think more creatively.

It looks like author Ernest Hemingway was on to something when he said:

When you work hard all day with your head and know you must work again the next day what else can change your ideas and make them run on a different plane like whisky?

In an interesting study on the topic of alcohol and its effects on creativity, author Dave Birss brought together a group of 18 advertising creative directors and split them into two teams based on their amount of career experience.

One team was allowed to drink as much alcohol as they wanted while the other team had to stay sober.

The groups were given a brief and had to come up with as many ideas as they could in three hours. These ideas were then graded by a collection of top creative directors.

The result? The team of drinkers not only produced the most ideas but also came up with four of the top five best ideas.

While alcohol may not be the drink of choice when you need to be alert and focused on what’s going on around you, it seems that a couple drinks can be helpful when you need to come up with new ideas.

A creative prescription: The optimal way to drink coffee and beer

Both coffee and beer (in moderation) have shown to be helpful when you’re working on certain types of tasks, however, you shouldn’t drink either when you need to do detail-oriented or analytical projects like your finances.

The increase in adrenaline from caffeine and inhibition of your working memory from alcohol will make you more prone to make mistakes.

Beer for the idea

The best time to have a beer (or two) would be when you’re searching for an initial idea. Because alcohol helps decrease your working memory (making you feel relaxed and less worried about what’s going on around you), you’ll have more brain power dedicated to making deeper connections.

Neuroscientists have studied the “eureka moment” and found that in order to produce moments of insight, you need to feel relaxed so front brain thinking (obvious connections) can move to the back of the brain (where unique, lateral connections are made) and activate the anterior superior temporal gyrus, a small spot above your right ear responsible for moments of insight:

Researchers found that about 5 seconds before you have a ‘eureka moment’ there is a large increase in alpha waves that activates the anterior superior temporal gyrus.

These alpha waves are associated with relaxation which explains why you often get ideas while you’re going for a walk, in the shower, or on the toilet.

Alcohol is a substance that relaxes you so it produces a similar effect on alpha waves and helping us reach creative insights.

Coffee meanwhile, doesn’t necessarily help you access more creative parts of your brain like a couple pints of beer.

Coffee for the execution

If you’ve already got an idea or an outline of where you want to go with your project, a cup of coffee would do wonders compared to having a beer to execute on your idea.

The general consensus across caffeine studies is that it can increase quality and performance if the task you are doing seems easy to you and doesn’t require too much abstract thinking.

In other words, after you have an initial idea or a plan laid out, a cup of coffee can help you execute and follow through on your concept faster without compromising quality.

This graphic pretty much sums up when you should drink coffee:

Quick tip: If you drink coffee, do so before noon so it doesn’t effect your sleep. On average, it will take between 5-10 hours for the caffeine from a cup of coffee to be removed from your system and messing up your sleep cycle can have a negative impact on your creative output for days to come.

If you decide to drink coffee and beer while you’re working, you should stick to no more than 2 cups of coffee or a couple beers per sitting and try to do this no more than once or twice per week.

Coffee and beer shouldn’t be thought of as magic bullets for creativity.

They are ways to create chemical changes that occur naturally in your brain with a healthy lifestyle. Quality sleep patterns and allowing yourself to take breaks by splitting your day into sprints will do the same trick.

But, if you have to choose between coffee or beer, think about what type of task you are about to do and make sure you don’t over-drink.

Too much of either and you’ll lose the benefits of both.