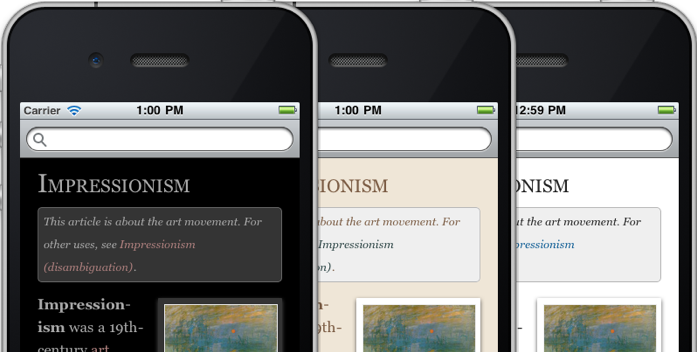 Last week we reviewed an iPhone app called All of Wikipedia that essentially brought all of Wikipedia to the iPhone – offline. Not long after publishing, I received an email from the developer of a competing app, Wiki Offline. Both apps are remarkably similar but for a couple of features, the most interesting in Wiki Offline’s favour being “Find Articles Nearby.”

The feature turns Wikipedia on your iPhone into a location based information resource – note I didn’t say “travel guide”. By simply tapping “nearby” on the app, Wiki Offline highlights points of interest nearby with quick links to their Wikipedia articles. What’s more, it seems to work better than the travel guide iPhone apps out there that are designed specifically to provide this very feature. Why? Wiki Offline has articles for locations no matter where you are, you needn’t be in the heart of a city or a tourist hotspot to learn from the app. With most tourist guides, you do.

I can’t quite explain the odd thrill of being stuck in traffic or on a long walk in poor weather – both generally considered rather dull periods – but with every second that passes, learning all there is to know about the area around you.

One perfect example of when this app came in handy arrived just last week. There’s a rather large cemetery just a few minutes drive from my home. I’ve driven and walked past this cemetery at least a hundred times and never wandered in, but stuck in traffic the other day I decided to pull out Wiki Offline and clicked “nearby”. I selected the pin that appeared over the burial ground and in just a matter of minutes, I learned about ten famous people who have been buried there. One was a rather infamous unsolved murder of Vera Page from the early 1930s. Another was Kazimierz Sabbat, the President of Poland in Exile from 1986 until his death in 19 July 1989. Each of the ten famous people have their own Wikipedia article page if you’re keen to dig a little deeper. Agreed, these aren’t life changing facts but merely a couple of interesting examples and something I simply wouldn’t have been able to learn about with such convenience had it not been for Wiki Offline.

With this iPhone app, now firmly positioned on my homescreen, I’m gradually beginning to learn all I possibly can about everywhere I go. What’s more, it’s probably the most productive time killer when waiting for your next meeting appointment to turn up, and a remarkably effective way of breaking the ice once he/she does turn up. In fact, in just a few minutes, you can pretend to know everything there is to know about everywhere, no matter where you are.

Wiki Offline is developed by California based MerchCraft and is available in the app store for $7.99. There’s a nominal $0.99 fee to download future updates of Wikipedia.

Update: The developers of the app have dropped us an email to let us know that if $7.99 is a little too expensive, or if offline access isn’t a priority,  it might be worth checking out Wikibot for 99c.

Read next: 50 days of Lulz: The life and times of LulzSec