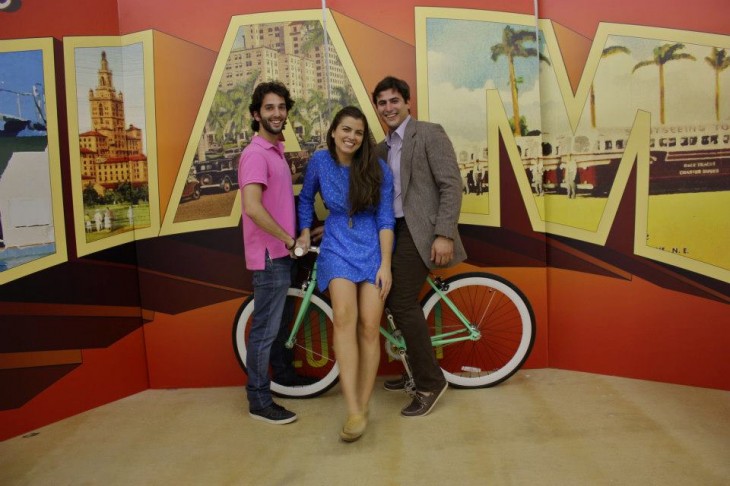 As the saying goes, “the best thing about Miami is that it is very close to the US.” One one hand, we didn’t hesitate to list the city as as one of the eighteen Latin American tech hubs you should know. On the other hand, its leading startups have little to envy to their New York-based counterparts when it comes to providing their staff with cool workspace.

Interestingly, they also do it “Miami style,” adding a touch of contemporary art and graffiti to their walls, taking opportunity of cheaper rents to expand, and of course, enjoying amazing views. These assets could well become a key selling point for the city’s tech scene, which is keen to attract talent to keep on growing.

“If we want to stay relevant as a community – if we want to remain economically viable as a community – we need to do everything we can to cultivate and grow our technology sector,” Miami-Dade County Mayor Carlos A. Gimenez declared ahead of its participation in The Americas Venture Capital Conference (AVCC), which TNW was also attending as part of Miami Innovation Week. Here are the best startup office spaces we discovered during our stay, in alphabetical order:

Burö Miami (pronounced “bureau” as in French) opened its first co-working space in Midtown in 2010, and is now gearing up for the opening of a new “Urban Workspaces” location in the Sunset Harbor neighborhood of South Beach later this month.

The space we have visited is home to around fifty companies, which can rent open space desks or private offices on a month-to-month basis, depending on their current needs and budget. Pricing varies between $249/month for a seat and $1,199 for a private suite.

Beyond all facilities you may expect, it is worth mentioning that Büro is very well designed and displays contemporary artwork on its walls.

Epicurator has yet to launch, but it already has a large office in the up-and-coming area of Wynwood, right across the street from The LAB Miami. The space looks so good that a sign on the front door warns potential visitors: “This is not an art gallery.” “We had to put that up because lots of people mistaking us for one and trying to get in during Art Basel,” co-founder Buzzy Sklar tells me.

Sklar is a serial entrepreneur and a well-known figure in Miami, where he used to own nightclubs and restaurants – he founded party venue Automatic Slims and gourmet burger chain Burger & Beer Joint. While he is now out of these businesses, his next venture is still related to his background, as he hopes that Epicurator’s upcoming apps will be the place “where friends discover food.”

A duplex office in Midtown, not very far from Büro Miami: that’s the place in which Freddie Laker is working on his new company, Gui.de. The son of late British airline entrepreneur Sir Frederick Alfred Laker and a serial entrepreneur himself, he hopes that Gui.de will “transform the best of the Web into a social tv experience.”

Thanks to his Rolodex and to the contacts he made while working at SapientNitro, he managed to get talented developers to give him a hand ahead of the official launch. Gui.de is still quiet about its exact plans and patent-pending technology, but you’ll get a glimpse of it if you pay close attention to the drawings on its walls.

As you may remember, expert live chat platform Liveninja recently got out of private beta with the help of a $500k funding round that will also foster its upcoming growth. This might mean moving into larger offices at some point, and saying goodbye to its current location, a cosy open space in Wynwood.

The walls are decorated with startup mantras, while each desk features Star Wars helmets and other geek memorabilia. “More importantly, all desks face the center,” CEO Will Weinraub points out while the office’s corgi wanders between us. The team is also very pleased about its fancy coffee machine: “It increases productivity five-fold,” they laugh.

Pipeline‘s first collaborative space has only been operating for a few weeks, but it already reached 70% occupancy within its first month of business. Located in Miami’s Brickell financial district, not very far from Senzari, it is attracting a mix of global companies, professional service firms and startups, while actively fostering collaboration between them.

For instance, co-founder Todd Oretsky points out that their coffee maker is a French press, which means that it takes a bit longer to prepare your drink, leading you to spend more time in the open kitchen, and hopefully start conversations with fellow co-workers.

The 14,000-feet space is quite eye-catching, thanks to a combination of art, design and 360-degree city and bay views. As for membership, it starts at $99 per month, rising to $1,000 per month for private offices. According to Oretsky, Pipeline won’t make money out of the startups it hosts, and only plans to monetize its larger clients, who can benefit from this cohabitation. At the moment, its member list includes names such as the Founder Institute, design firm Pininfarina, non-profit Virgin Unite and interactive learning venture LearnerNation.

You may not necessarily associate Miami’s iconic South Beach (SoBe) area with startups, but it is the base of development studio Rokk3r Labs. It already occupies one full floor of a fancy building on Michigan Avenue, and is about to expand to the floor underneath to keep up with its growth.

“Our staff has already increased from five to twenty-eight since we have started operations in March 2012, and we are hiring,” managing director Nabyl Charania explains. The profile it is looking for? Talented developers who are keen to help startups bring their ideas to life thanks to their technical skills.

However, don’t think of Rokk3r as a factory for clunky MVPs; its ambition is to deliver high-quality code through good practices such as pair programming, but also by making sure its team leaves the office by 6pm every day. “We want our work to be sustainable, and not have our staff burn out in three months. That’s the rationale behind our activities,” Charania says.

When I visited the offices, part of Rokk3r’s team was attending their weekly yoga class, delivered by celebrity teacher Rina, for whom they developed an app. Other benefits include movie and soccer sessions, no vacation policy, free daily breakfast and access to three condos the company is renting on the beach.

Music platform Senzari is one of the coolest companies in Miami, and unsurprisingly also boasts one of the best offices in town. Located in Brickell, it has spectacular views on the ocean in every room, including its large meeting room and its main open space, which includes a large ping-pong table.

Its break room features a huge TV screen that the team can use to play video games or for pair programming. Near to its mini-photo studio, Senior director of software engineering Sue Sealock also pointed out the 3D printer that CEO Demian Bellumio had bought for HackDay Miami (see our previous story).

The LAB Miami in Wynwood

Right across the street from Epicurator, The LAB Miami also shares a wall with community arts center Light Box at Goldman Warehouse. Both venues are funded by the Knight Foundation, which recently invested $250k out of the $650k The LAB’s team raised for its new 10,000 square foot space.

The LAB is currently receiving applications to select the 300 members who will start working from its campus later this month. Ahead of its official opening, it has already kickstarted its operations by hosting HackDay’s latest hackathon for a weekend of non-stop coding, followed by the first edition of Wayra Global Demo Day (see our story).

The space also boasts several pieces of art, such as Gardar Eide Einarsson’s giant neon sign “Jesus Saves” – a reference to cult movie “Dirty Harry” – and Minerva Cuevas’ installation “Egalité – Une condition naturelle,” featuring dozens of custom Evian bottles. Beyond the anecdote, it also confirms that there is something unique about Miami’s tech scene and its connections to other segments, which it now hopes to leverage to find its place on the global map.

If you are curious to find out the exact location of each company and co-working space, you should check out the site MapYourStartup.com, which Rokk3r Labs and co-founder Norberto ‘Tito’ Gil have recently launched to promote and connect Miami’s entrepreneurial ecosystem.

Read next: Upgrading your phone to be truly social: A chat with Just.me founder Keith Teare (video)