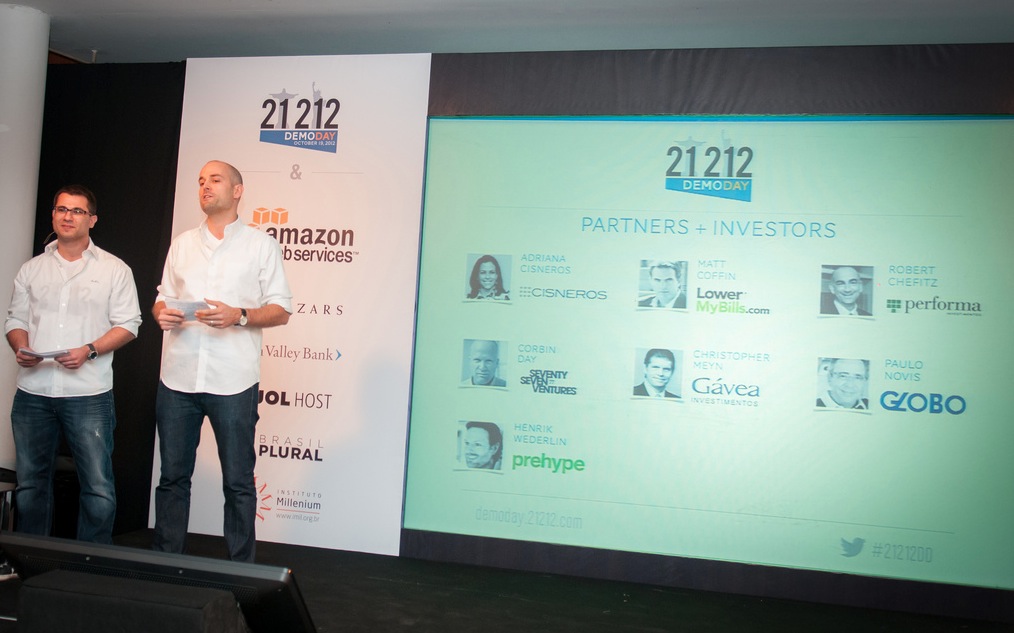 Brazilian-American startup accelerator 21212 has raised S$5 million USD for its program, co-founders Marcelo Sales and Benjamin White announced on stage during the accelerator’s second Demo Day, which we are attending.

In addition to its acceleration program, 21212 is also launching 21212 Fund, for which it will be looking to raise S$50 million. The fund will be aimed at co-investing in early-stage startups that were accelerated by 21212 itself, but also by the growing number of accelerators which are operating in Latin America, such as Wayra, NXTP Labs, Pipa and Tree Labs.

This is a welcome announcement for the Latin American market, where there is often a gap between early stage and series A rounds, and where it is not uncommon to see companies go from an accelerator to another.

Still, this is not the case of 21212’s alumni, which have been fairly successful at raising money. According to White, 11 of them have raised money so far, for a total of R$5.5 million (around $2.25 million USD). The top success story to date is PagPop (previously known as Vitalcred). As you may know, this Square competitor is one of the 10 companies that recently received a $40 million investment from Intel Capital.

As for the $5 million USD it raised in partnership with DXA Investimentos, 21212 plans to use them to take its acceleration program to the next level. Starting in 2013, it will welcome 3 batches of 10 startups per year instead of 2. Ultimately, its ambition is to accelerate 100 companies over the next 5 years.

21212 also unveiled it will make changes to its program itself. While insisting that money is not the main way in which it adds value to its teams, White announced that it will now give up to $25k USD in “survival money” to the startups it accelerates.

It is worth noting that 21212 didn’t reveal how much equity it will require from each team. As a matter of fact, it decided to move away from a “one size fits all” equity model to individual term sheets, to better accommodate the diversity of applications it receives.

No matter of their development stage, startups will also receive $250k worth of technical services from its partners, such as Sendgrid and Amazon Web Services.

21212 is currently accepting applications for its next acceleration program, which will start in early 2013 and last 4 months. Sales also encouraged developers to get in touch with the accelerator, even without a startup project.