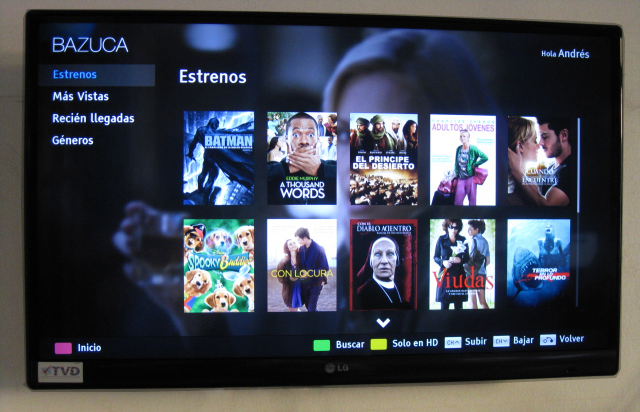 Chilean over-the-top (OTT) film & TV service Bazuca is about to expand across Spanish-speaking Latin America, its managing team told TNW. Ahead of this rollout, it is also launching a new version that relies on a different technology.

As we reported in a previous article about OTT services in Latin America, Bazuca is owned by the telecommunications company VTR, itself co-owned by Liberty Global.

While the platform’s recent upgrade may look like a redesign from the end user’s perspective, there is actually more to it. As a matter of fact, Bazuca has closed a partnership with Avail-TVN, which will be using its AnyView Content technology to deliver programming in multiple adaptive bitrate (ABR) formats that adjust the stream’s quality to each user’s Internet connection.

According to its CEO, Rodrigo Terrazas, the purpose of this switch is to adapt to the fact that broadband penetration is still limited in Latin America. Thanks to ABR and an improved UI and UX, he now hopes that Bazuca will be able to deliver a consistent, high-quality service across multiple devices.

Since its launch in 2010 as a transactional VOD (TVOD) service, Bazuca has expanded its scope beyond computers, and can now also be accessed via several connected TV models and Blu-Ray players, as well as devices such as Sony’s Playstation. Ultimately, the company’s ambition is to be available on any connected device, Terrazas says.

Although new apps are in the works to reach this goal, the next milestone for Bazuca is the launch of a subscription VOD (SVOD) service à la Netflix by the end of the year. This is another element of its above-mentioned deal with US firm Avail-TVN, which also includes content licensing.

As you may know, Avail-TVN specializes in providing digital content and services, and raised $100 million last May to fund its international expansion and acquire UK-based On Demand Group.

Besides its deal with Avail-TVN, Bazuca has also closed direct licensing agreements with Hollywood content providers, its Head of Content Andres Espinoza explains. As a result, its offering will include both new releases and catalogue titles, available for SVOD and TVOD across multiple devices.

According to Espinoza, content will be key for Bazuca to differentiate itself from Netflix. “We will have new releases from the studios available for streaming, including blockbusters, while Netflix’s business model means that they only get recent titles from independent content providers,” he explains.

“We will are also working hard on acquisitions to expand our offer every month, taking into account what our users want – Hollywood movies and US TV shows, but also local content and niche programming, such as European and Asian cinema.”

Content aside, Bazuca also offers convenience, as its Chilean clients can add their online film consumption to their cable bill. While describing the company’s positioning in Chile as “cable operator-friendly,” Terrazas declined to confirm at this stage whether it will follow a similar approach when it expands across Spanish-speaking Latin America in the coming months.