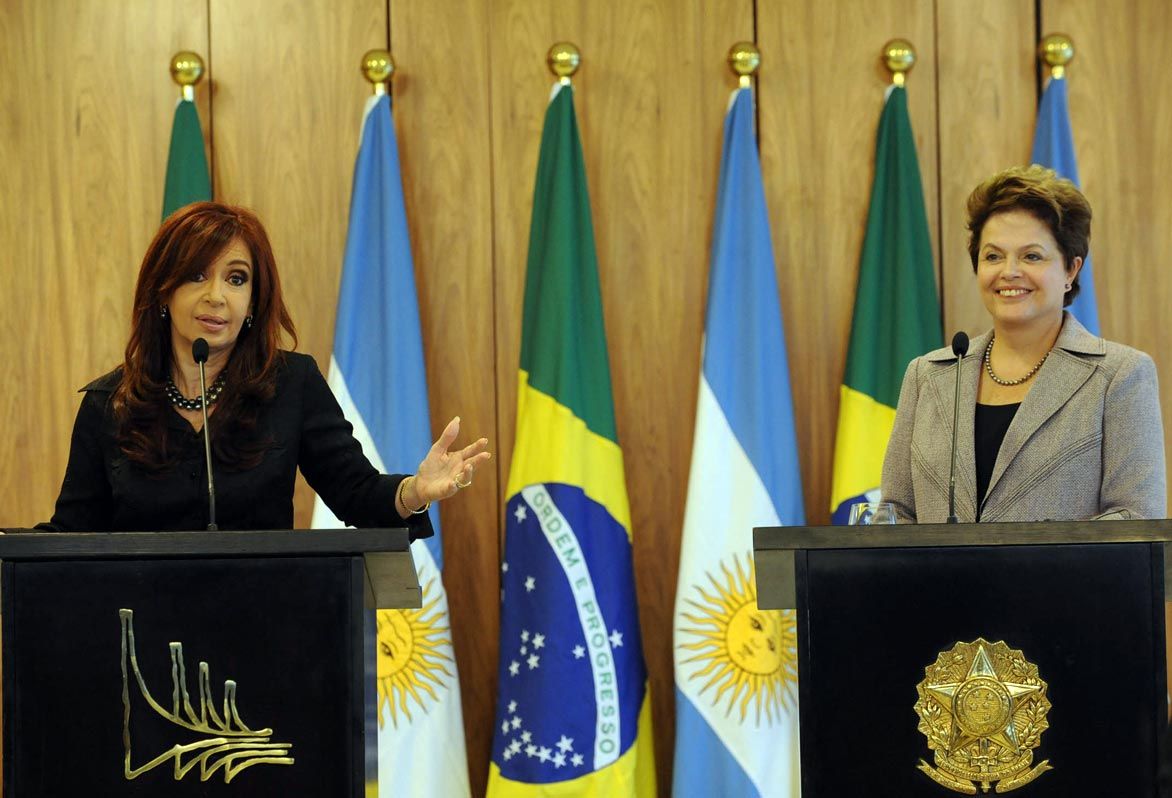 Did you know that nearly half of migrants worldwide are women? Well, once you know that, it’s only natural that the gringos in Latin America we wrote about last week have female counterparts, who are just as busy as they are creating and supporting startups. Here are some women you should definitely know:

Nathalie Trutmann was born in Guatemala, but her home country is only one of many places she lived in. Having studied in the US at UC San Diego and Singularity University, she went on to work in New Zealand and Sri Lanka. The reason why she now lives in Brazil? “Crazy love!” she answers. When she found out the Brazilian she had fallen in love with couldn’t picture himself as a house-husband in Sri Lanka, they decided to move to São Paulo.

Nathalie is now the Innovation Director at FIAP, one of Brazil’s top IT universities. Among recent achievements, she was responsible for FIAP hosting Brazil’s first Startup Weekend and welcoming Geeks on a Plane during their stop in São Paulo (see our previous story). She’s also in charge of the upcoming TEDxFIAP, which will take place on November 5th and focus on a single theme: ‘Entrepreneurs of the Future’.

Although Nathalie is Latin American, she had to adapt to the Brazilian culture. It took her a while to figure out how things work, she explains. Yet, she enjoys “the creativity, color and innovation that are everywhere.” She’s also the first person I’ve ever met to praise São Paulo’s public transport – it’s much better than in Guatemala or Sri Lanka, and preferable to spending hours in traffic jams, she says. Overall, her experience in São Paulo is positive, despite the challenges of living in  such a huge city:

“I still love to be bringing up my kids here because I feel it’s a place where people can be free and explore different opportunities. It is very upbeat and optimistic and diverse.”

Aurelia Porolli is a French entrepreneur who has been based in Buenos Aires since 2008. Her relationship with Argentina started in 2005 when she spent a year in Buenos Aires as part of a university exchange program with her business school, HEC Paris. It’s also in 2005 that she met Pablo Porolli, who is now her husband and business partner.

After a couple years together in France, the pair was keen to move back to Argentina and launch their own business. This is how Regalos a la Carta was born in 2009. The website, whose name means “A la carte gifts” is a copycat of the ‘gift experience’ concept, which has been quite successful abroad and recently took off in France. Indeed, Aurelia is not the only French-speaking person trying to bring the concept to Latin America; a French Canadian entrepreneur called Henri Bugnet is doing the same in Chile with Regalo Box.

As a foreigner, Aurelia is thankful for having an Argentine business partner. “Although Argentina is a country of entrepreneurs, it’s also very bureaucratic,” she explains. Partnering with a local spared her many legal and fiscal issues. Besides this point, she didn’t face specific challenges as a foreign entrepreneur in Argentina. She even received a grant from the city of Buenos Aires as part of the Buenos Aires Emprende program. She also feels that her French nationality inspires trust and interest, especially among the restaurant owners her startup is in business with.

Brenna Loury is the Communications Coordinator of Start-Up Chile, the government-supported program which aims at attracting early stage global entrepreneurs to the country and fostering the local startup ecosystem (see one of our recent stories). It hopes to welcome 1000 participants by 2014 and communication will play a key role in the program’s success. Brenna has been involved with it from day 1 and is “enjoying it immensely,” she says.

An American from Boulder, Colo., Brenna is a graduate from Gonzaga University and has spent a gap year in Norway. Yet, it’s in Santiago that she’s been living since 2008. She came to the country as a long-term volunteer project with the NGO Habitat for Humanity in their resource development department. When the gig ended, she decided to stay and joined Start-Up Chile. The organization is now gearing up to announce the results of its latest application round early next week.

Anne-Sophie Dutat, as you may guess from her name, comes from France. Although she’s now based in Argentina, her attention was initially focused on Brazil, which she discovered while working on a social project in 2002 – funny enough when you know the fierce rivalry between the two countries. Despite her love for Rio de Janeiro and its beaches, Anne-Sophie felt that we would focus more easily on building her own business in Buenos Aires, which she now enjoys very much.

Anne-Sophie describes herself as a ‘globe-trotter’; she has lived in Russia at the time she was working for luxury brands and speaks several languages fluently. Beyond her international experience, there are other reasons why she easily adapted to her life in Buenos Aires. Indeed, the Argentine capital is often described as “the most European city in South America.” As one of the 16,000 French expats based in Buenos Aires, Anne-Sophie knows there are many French-owned and French-inspired cafés, restaurants and shops in town.

Actually, quite a few of these are listed on her website, GuiaVulevu, a city guide for upper-class women interested in fancy places and international brands. GuiaVulevu already boasts 12,000 subscribers to its ad-supported bi-weekly newsletter and has attracted high-profile advertisers, but Anne-Sophie has bigger ambitions. Convinced that her business model is highly scalable in Latin America, she has development plans for Chile, Peru, Colombia “and hopefully Brazil.”

Earlier this year, we listed Julie McPherson as one of Ten Women to Watch in the Latin American tech space. Indeed, regardless of nationality, Julie is a key figure in the Chilean tech ecosystem. She describes the company she co-founded, Tiaxa, as “a one-stop-shop for the Latin American telecom industry.” Launched in 2002 to provide services such as WAP portals, the company pivoted a few years ago; its core business is now to help telcos with their data service infrastructure.

An American, Julie met her Chilean husband in 1996 while working at an investment bank in Santiago. She then returned to the US, where Tiaxa was created in 2000, before moving back to Chile where the company has been headquartered since 2002. Julie is committed to developing the local business ecosystem; she’s supporting other female entrepreneurs thanks to the Impakta program she co-initiated in Chile with fellow women entrepreneurs from the Endeavor network.

The company that Ann Williams co-founded, Okto, was born from Tiaxa, the company that Julie McPherson co-founded (see above). When Tiaxa considered ending its operations in Brazil after a short tentative to enter the market, its main executive in the country, Ann Williams, begged to differ. Ultimately, she bought the subsidiary and created her own company, which took the name of Okto in 2006. Okto rapidly became a large company.

Okto now specializes in B2B mobile solutions and belongs to Spring Wireless, which acquired it in 2008 in what Ann describes as “one of the largest M&A” in the sector. Ann continued serving as Okto’s CEO until 2010. Before creating Okto, she had worked and studied in the US. An American who previously worked at Motorola, Deloitte and USAID, she’s a graduate from Stanford University and has an MBA from the McCombs School at the University of Texas at Austin. Ann is now working on personal projects from São Paulo; knowing her track record, the least we can say is that we’re curious to know what her next move will be.

Anette Krohn is the Operations Manager at Endeavor in Chile. As you may already know, Endeavor is a non-profit organization that supports entrepreneurs around the world, with a particular focus on emerging countries. It started operating in Chile in 1998 where it currently supports around 50 ventures, “after screening more than 3,000 candidate companies.” Besides its offices in Santiago, Endeavor Chile launched operations in 2010 in the city of Temuco, 670 km south of the Chilean capital.

Anette, who studied at the universities of Gothenburg and Uppsala in Sweden,  joined Endeavor Chile in 2004. Before joining the organization, she worked at Swedish companies in Europe and South America. She then went on to work at Trade Chile, a company whose mission is to “facilitate investment and trade to and from Chile”. The country seems like a perfect fit for her: this mother of two lists “hiking, skiing and sailing” as her favorite hobbies.

Christy MacLeod has lived in twelve different cities in five countries before moving to Rio de Janeiro a few months ago, “the first Latin place” she has lived in. An American, she had visited Brazil twice before, and “fell in love with the country,” which she finds very welcoming. Attracted by the many opportunities she saw in Brazil, she learned Portuguese. Besides the language, she also discovered a lot about the local culture, especially on the business side. Negotiations are less straightforward than in the US, the UK or the Netherlands, and involve more talking, Christy explains.

Christy, who has started her career as a business  analyst at New York Stock Exchange, is now a CRM coordinator at Peixe Urbano‘s Marketing department (see our previous story). She’s only one of the many foreigners from all over the world working for the fast-growing daily deals website – a recent article in the magazine Veja Rio referred to the company’s office in Rio as “a small United Nations.”

Do you know other foreign women entrepreneurs in Latin America? Let us know in the comments.

Read next: Is iTunes Match a honeypot for music pirates? A copyright lawyer weighs in