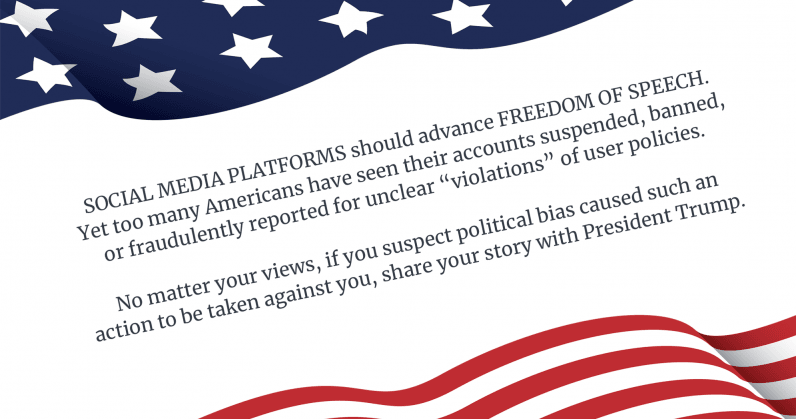 The Trump administration on Wednesday launched a new tool where pissed off Conservatives can whine about social media bias. So long as they’re legal citizens, anyway.

For Conservatives like Trump, a man who rose to prominence on the backs of the social networks he’s now convinced are out to get him, the argument isn’t a new one. Republicans have, since before the last Presidential Election, been rallying support for the idea that these platforms were silencing right-wing voices. Never mind evidence that Facebook might be directly responsible for Trump’s ascent to the Oval Office.

Too many Americans have seen their accounts suspended, banned, or fraudulently reported for unclear ‘violations’ of user policies. No matter your views, if you suspect political bias caused such an action to be taken against you, share your story with President Trump.The

It’s unclear who, if anyone specific, Trump is referring to. But Candace Owens, James Woods, Laura Loomer, and Alex Jones spring to mind.

Of the group, one, Alex Jones, was once praised by Trump for his “stellar reputation” — a reputation that’s included claims that the Sandy Hook school shooting was a hoax and that the Clintons were responsible for a child sex ring operating out of a DC-area pizza joint.

Everyone mentioned, however, had each been warned or banned previously from Facebook or Twitter. They earned their respective punishments by running afoul of clearly stated rules, rules that typically warned against the use of hate speech and calls to incite violence. And while Facebook and Twitter refuse to comment on specifics, it’s not hard to find examples in which they did just that.

It’s a crazy idea to begin with; private companies have no requirement to continue dealing with problematic accounts. If Twitter woke up tomorrow and decided it wanted to rid my account from the web, with or without cause, there’s little I could do about it.

The argument, in fact, would seem to fly in the face of the “free market” brand of capitalism most Conservatives subscribe to. Private companies, the argument goes, should be free from government intervention and left to run their businesses as they see fit — so long as they stay within the bounds of law. And while you can certainly make the argument that social media platforms have exceeded the law’s boundaries, that debate would be one centered on data usage and user privacy, not censorship.

Conservatives, though, are doing their best to turn this into a First Amendment argument, and it clearly doesn’t fit.

Congress shall make no law respecting an establishment of religion, or prohibiting the free exercise thereof; or abridging the freedom of speech, or of the press; or the right of the people peaceably to assemble, and to petition the government for a redress of grievances.

Someone is going to have to point out the part that states companies must continue to allow their users to be harassed or threatened in order to appease the offending party. It’s making an argument that a man can’t be thrown off a plane for asserting his First Amendment right in informing passengers that they were all going to die upon liftoff.

But that’s not even the weirdest part of Trump’s call for Republican tears. Just a few questions in, the form’s author(s) make a rather odd inquiry into respondents’ citizenship status, asking those filling out the form if they are a “US citizen or permanent resident.”

Because even when Conservatives are trying to drum up support for a non-issue, it seems, immigrants aren’t welcome.