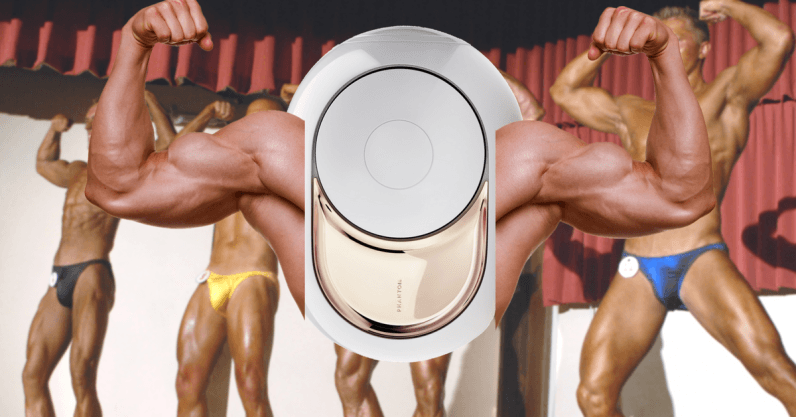 We need to get a few things out the way before we can start reviewing the Devialet Gold Phantom bluetooth speaker. Firstly, it’s odd looking. Secondly, it costs $2,890. Thirdly, it kicks out 108 dB of pure noise, the same as a live rock concert.

But, let’s return to the first point. You’re either gonna love this thing, or want it as far away from you as possible.

And it elicited some strong reactions from the office, with people comparing it to:

I can see that, it definitely does have a… specific aesthetic

Yeah, it’s an alien looking device. I guess that’s why some people love it though – it genuinely stands out from the crowd.

Still, whether you think it’s the world’s ugliest or sexiest speaker is completely down to personal preference. Me? To paraphrase Homer Simpson, I think it’s handsome in an ugly sort of way.

Connecting to the Gold Phantom was incredibly easy. I turned it on, found it on the bluetooth menu of my phone, and connected without a hitch. There’s no light on the machine though, which does make it kinda annoying if you want to quickly know if it’s on or off.

I was also surprised with how stable the bluetooth connection to the speaker was from long distances.

Another thing I liked very much about the Gold Phantom experience was the “breathing motion” the sides (read: woofers) made when the device turned on.

Okey dokey. To increase its alien-looking-ness (that’s a word, don’t look it up) each side of the Gold Phantom has a circular section that pulsates with bass. Little fact for you, supposedly there’s 60kg of “thrust force” behind the woofers.

Put this in your eye holes:

Right? Kinda makes you want to put your tongue on the vibrating parts and savour the rumble that’ll run through your body.

But are you… hold on, what?

Uhh, you gonna talk about how it sounds any time soon?

We’re getting there. Before we go through to the analysis though, we need to remind ourselves: this is a top tier speaker. Considering it costs close to three thousand dollars, we have to be as critical as possible when listening.

First off, while the Gold Phantom is portable in theory, it’s pretty fucking heavy, tipping the scales at 11.4 kg. Combined with the aforementioned cost and the fact it needs mains power, it all adds up to a speaker you’re not gonna be moving much.

Shifting it room-to-room in your house is possible, but you’re not gonna be taking this round to your mate’s yard too often.

Now we get to the good stuff. Overall, the Gold Phantom sounded great and handled everything I hurled in its direction with alompb.

After the intro (which lasts around one minute and twelve seconds), the track explodes into an ever-evolving, conscious-rap tale of a police confrontation. The El-P produced beat journeys through organ-influenced synth stabs, boom-baps, squelchy bass, and almost operatic electronic waves.

This underpins Killer Mike’s intense delivery that’s consistently balanced between passion and precision, creating a group of sounds that push speakers to their limit.

When played with the Gold Phantom, the vocals and beat play off each other accurately. The backing track is muscular and meaty. The lyrics never muddied, despite sitting in the middle of a busy mix and, in this instance, played at a high volume.

Plus, the bass is earth-rattling. It’s a pleasure to listen to.

What about less, uh, confrontational music?

Have a listen to The Weather Station’s “Thirty” then:

Regarding vocals, whenever Lindeman switches into a falsetto the Gold Phantom handled the shift with a spine-tingling impact.

An issue did crop up though. When the full band enter the fray in “Thirty,” the song kicks up a notch with a thumping bass and the drummer putting some heart on the kit. On different sound systems, this sections sounds full and free, while the Gold Phantom it had a compressed sound.

Not a muddy, can’t-tell-the-instruments apart aura, more of a lack of space between instruments on an already sparse song. Where the kick drum, cymbals, and strumming strings should soar, they end up milling around instead.

Look, it sounds great. That’s inarguable. But pickiness is vital when we’re dealing with this tier of speaker. If I had to summarize: the Gold Phantom handles beefy, bassy music – such as drum and bass, and rap – better than it does more intricate types, like folk.

Still, all genres sounded fantastic, especially for something that’s not much bigger than a standard backpack.

You said it was loud, how loud?

Oh mate, it’s easily the loudest bluetooth speaker I’ve ever tested, especially for its size. Those 4,500 watts truly kick out some volume. It also does an incredible job of not letting the sound distort and break at those higher levels, which are ear-rupturing loud.

The Gold Phantom sounds great, but why does it cost so much?

There’s a huge amount of tech jammed in this curvy monstrosity. According to the company, it took 10 years of R&D and 25 million euros worth of investment to create the Phantom range of speakers (which also include The New Phantom and Silver Phantom).

On top of this, the company registered 108 patents when creating the speaker. There are also a range of other technologies (speaker companies love creating their own sound technology), which you can find out about here.

Creating a Gold Phantom involves 1,610 parts and 60 different assembly techniques, as well as over 250 quality controls. That, my friend, is why it costs so much.

I’d say wealthy audiophiles who live in futuristic homes. Hell, as you can sync up multiple Phantoms to create a multi-room experience – as well as connecting to the speakers with WiFi, optical cable, and other methods –they’ll easily function as a home entertainment system.

But, I do have my reservations. It’s a running theme of my speaker reviews that I always refer to a separate hi-fi system (i.e. a set of wired speakers and an amplifier) and this is no different.

For close to three thousand dollars, you can get yourself one hell of a set-up. For example, you can get a Cambridge Audio CXA60 ($750) or a Rega Brio ($995) amplifier, alongside some wonderful speakers, like the Monitor Audio Silver Series ($750) for almost half the price of the Devialet Gold Phantom. So, you know, you could two of those set-ups and have them in different rooms.

Of course, this wouldn’t be anywhere near as portable or as attention-grabbing. It would sound great though.

Circling back, the Devialet Gold Phantom is genuinely one of the best bluetooth speakers I’ve ever used. Yes, it’s expensive, but it sounds amazing. Whether it’s worth the cost depends on you. So, tell me, do you think it’s sexy?

If you want to take the plunge and buy a Gold Phantom, you can do so here.

Read next: Telegram Passport is already drawing fire for not being secure enough