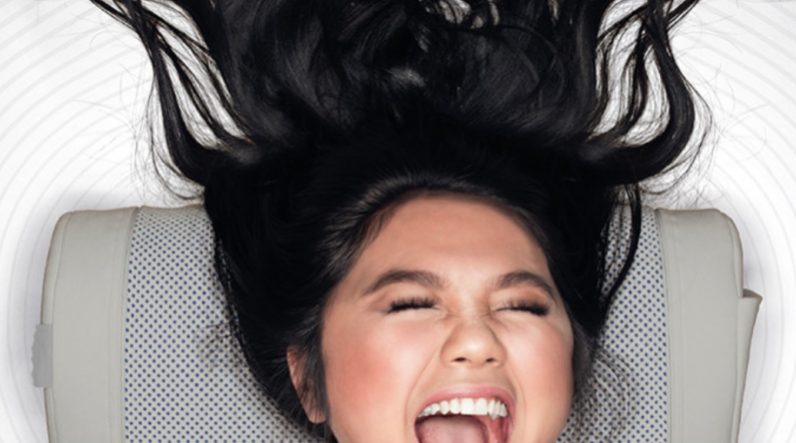 Pillows haven’t fundamentally changed much over the millenia. They’re soft, squishy things you put your head on. But do you know what pillows have been missing? Sound.

Fret no more, for the $300 Flexound Humu solves this glaring omission. Fully funded on Indiegogo and expected to ship in September, it’ll allow you to fall asleep to the sounds of drum ‘n’ bass, grindcore, and mumble rap vibrating through your cranium.

Seriously though, I found myself appreciating this musical pillow more than I expected to. Though it works great with music, it really shines with movies and games. And despite some qualms, it unique design addresses a worthy niche.

Specifically, the Humu occupies a space between headphones and speakers. For example, there are times when I don’t want the isolated, two-dimensional sound of headphones, but don’t want to annoy my neighbors by blasting my speakers either. The Humu provides an open sound that largely remains within your own personal bubble.

But there’s another unique aspect to the Humu: tactility. Hardware designed specifically for  a tactile low-end means that when you’re watching a movie, bass really rumbles. It provides a body-thumping experience you can’t really get from headphones – the bass resonates throughout your entire torso – without annoying your neighbors or roommates the way a powerful subwoofer would.

I’m also pleased to report that bass doesn’t sound like a wet fart (a serious concern for any product that claims to let you “feel” the music). Though there’s no easy way to adjust the Humu’s bass output, I was rather surprised by how tasteful its tuning is. It never seemed to bloat the music even during busy pieces, and I rarely came across any distortion. The physical impact of the bass is simply there when it needs to be.

Tactility aside, the overall sound quality was a pleasant surprise. The treble and midrange remain fairly clear despite all the fabric, and truth be told, I’ve heard more bloated sound from headphones in the same price range. It’s far from a true audiophile experience – it doesn’t even have AAC or AptX to mitigate Bluetooth compression – but it’s a pretty decent sound output for something so squishy.

The Humu’s main acoustic asset is its soundstage. While it’s a little weird to have sound technically coming from behind your head, it mostly feels like the sound is around your head. It’s an enveloping sound that’s fantastic for immersive content.

The rear positioning and tactile response means I haven’t heard anything quite like it, but if I had to describe the soundstage, it would be somewhere in between open-back headphones and near-field speakers. That makes it particularly valuable for gaming and movies, where the minutiae of acoustic resolution usually don’t matter as much as a sense of immersion. That’s something the Humu is very good at.

By the way, sound is better through the Aux port, but I imagine most people won’t want an extra cable sticking out of their pillow. I say extra because the Humu is still a gadget that needs to be charged. Eight hours of battery life is decent enough, but considering many Bluetooth headphones manage to break the 24-hour mark, I expected beefier performance.

Also, a pet peeve that I’m addressing to every gadget maker: please stop it with the micro USB ports. It’s incredibly annoying to have to find a separate charger just for my Bluetooth pillow. I know USB-C is more expensive to implement, but I’d pay extra just to do away with this inconvenience. I mean, it’s already a $300 pillow.

But my biggest complaint about the Humu is something that might not even matter to many: the speaker is only big enough for one person to comfortably use. I’m sure that’s fine for much of the intended audience, but it makes it less versatile than I’d like.

Because my headphones are superior for music, I generally saved the Humu for movies, games, and TV – when I could really appreciate its soundstage. But most of of the time I watch TV or Netflix, I’m doing so with my girlfriend.

Unfortunately, the Humu is just a bit too small for the both of us to use for an extended period of time. While it’s almost the length of a regular pillow, the ends (which contain much of the speaker components) are a bit too stiff to sit through an entire movie.

Granted, the Humu does leak enough sound that someone on a pillow next to you will definitely hear everything you can, but it’s far from ideal. I’d personally be much more inclined to buy one if there were a more cuddle-friendly size option – even just a couple of inches more would a long way. Or maybe the could be an option to link up two Humus? I don’t know, but I just ended up using my speakers most of the time out of practicality, as much as I like the idea.

But I don’t mean to end on a negative note, as that’s only relevant if you regularly intend to share the experience. For everyone else: if the idea of relaxing on your bed or couch and being thoroughly immersed in sound is appealing to you, the Humu is well worth a look.