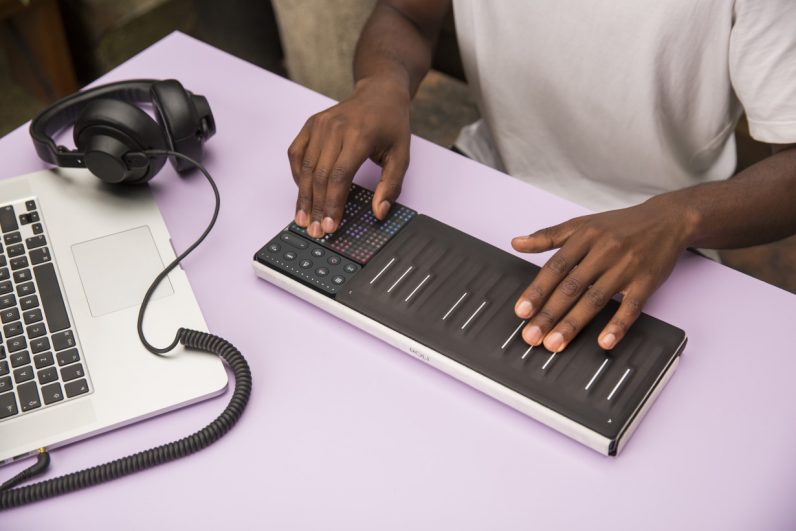 Roli’s Blocks, a system of portable, modular MIDI controllers for expressive music creation, are some of the most clever gadgets I’ve tried in the past few years. Now the company is combining some of its best gear into one package called the Songmaker Kit, retailing for $649. The Kit has previously been available in limited amounts on Roli’s website, but is now selling globally at physical and online locations.

The kit includes three of the most important Blocks in the system. The Lightpad M is an pressure-sensitive surface with LEDs that light up to provide different functionality. It can function as a MIDI instrument, lighting up to highlight different scales. It can be also used like synth pad, subdivided into little light squares to build beats, chords, and a myriad of other things.

The pressure sensitivity then allows you apply effects, bend pitches, and modulate these sounds to your liking.

The Seaboard Block, meanwhile offers the similar pressure sensitivity and modulation control, but is modeled after a more familiar keyboard layout. The tiny Loop block rounds things out by giving you nice clicky buttons for controlling live looping for your performances.

All these pieces interconnect via magnetic connectors and Bluetooth, and the Songmaker Kit includes a nifty carrying case too. And if you want a wired connection, there’s a USB-C port on the two bigger blocks as well.

Basically, it’s a solid all-in-one deal on some neat equipment. And that’s not including the $400 worth of software, which in addition to Roli’s custom apps includes two digital audio workstations. The best thing about it is that you can always expand your system in the future – if your wallet allows.

Read next: Mario Kart and Monopoly don't belong together