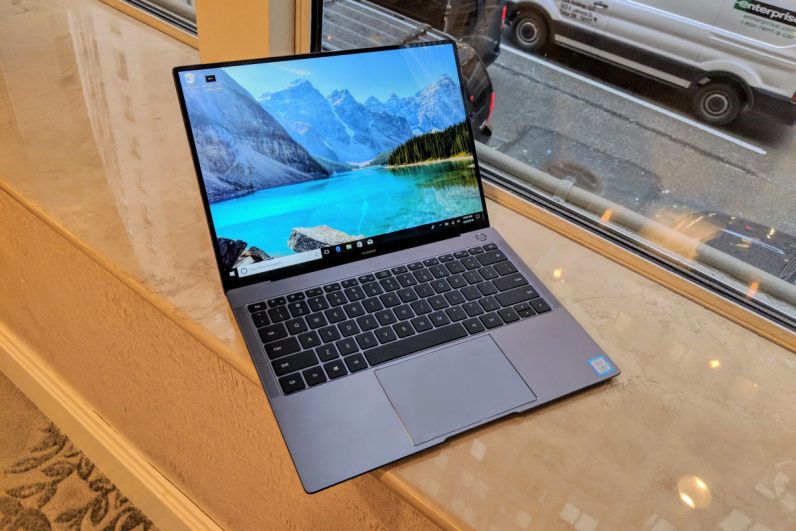 “Guess where there webcam is,” asked a Huawei executive as he passed the new MateBook X Pro around a room full of tech reporters.

After a couple of minutes of confused searching – is it hidden in the tiny bezel? perhaps behind the LCD? – someone figured it out.

Specifically, the webcam is tucked under the keyboard camera button, physically hidden to protecting any snooping. Press the button and the camera pops up with a super-satisfying click.

That’s frikkin’ clever. So clever, I might not even mind the up-the-nostrils perspective.

Impressive design touches throughout the MateBook X Pro make a strong case that Huawei’s PCs are worth considering next to the MacBooks, Dells, and HPs of the world – even though it’s only the second traditional laptop Huawei’s ever made.

It’s a followup to the company’s excellent MateBook X, aiming at a higher-end market while maintaining its predecessor’s portability. A look at the spec sheet reveals a few interesting details:

Huawei says the MateBook X is the thinnest laptop with a dedicated graphics card. While the MX150 isn’t going to play games at native resolution and max settings, it’s still a huge jump over integrated graphics. You’ll be able to play modern titles at lower resolutions and medium settings, but the dedicated graphics is more likely aimed at people doing video and photo work on the go.

The battery is also pretty hefty for its size, larger than competitors like the Surface Laptop and XPS 13 – I’m curious to see how the 14-hour battery life claim holds up. And the fact that Huawei managed to fit a USB-A port in such a thin frame is welcome.

But the screen-to-body ratio is what’s most remarkable. It’s an impressively small laptop considering the a 14-inch screen and 3:2 aspect ratio. Other laptops with tiny bezels like the XPS 13 kind of cheat. They have small bezels on the sides and top, but will have a huge chin at the bottom. The XPS 13 has an 80.7 percent screen-to-body ratio. The MateBook X is nearly all screen, at 91 percent.

Like its predecessor, build quality seemed solid and the design attractive, if a little too MacBook-like for my liking. The keyboard feels pretty great for a device its size, and the touchpad is huge.

The display looked gorgeous and bright – and I’m glad it’s touchscreen this time around. The speakers were impressively loud; they filled up a conference room at 70 percent volume, and I could even hear some stereo separation from the other end of the room. The original Matebook X had some of the best speakers I’ve heard on an ultrabook, so it’s nice to see Huawei improving on them here.

Unlike Huawei’s phones, the MateBook X Pro also will arrive free of bloatware – at least in the US. Because it’s a Microsoft Signature Edition build, you won’t see anything on the desktop other than the recycle bin.

Quite frankly, this is one of the rare cases I can’t think of something to complain about from my brief hands-on. That said, Huawei hasn’t announced a price as of the time of publishing though, so lets hope it’s reasonable. Let’s also hope the MateBook X Pro holds up to scrutiny when we do our full review, because right now, there’s a whole lot to like.

Read next: Build a great website with no coding skills and host it for life for under $50