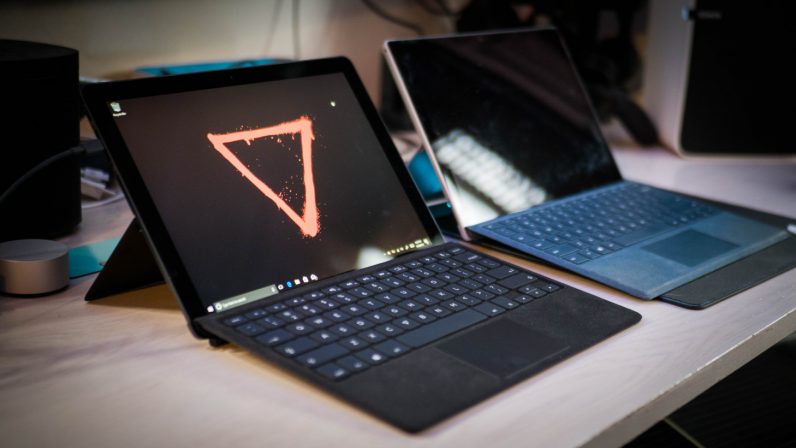 The Eve V is not one of those cases. It took a while to get here, but the company set out to create a convertible tablet that could live up to Microsoft’s Surface Pro at a lower price, and in some cases improve on it. I’ve spent a month with the Eve V, and it largely delivers on its high expectations.

The Eve V wasn’t just crowdfunded; its design was crowdsourced. That is to say, Eve polled potential users on what they wanted from a Surface Pro competitor, largely addressing some of the biggest complaints hurled at Microsoft. Just a quick look at the spec sheet shows some of Eve’s advantages:

Arguably the largest criticism of Microsoft’s Surface line has been its slowness to adopt the USB-C. And when it finally did with the Surface Book 2, it didn’t use the faster Thunderbolt 3 standard. Meanwhile the Eve V has two USB-C ports, one of them Thunderbolt 3.

There are other welcome touches. The keyboard has RGB lighting, there are two USB-A ports as well, compared to the Surface Pro’s single port. The Windows Hello camera is replaced by an arguably-more-reliable fingerprint sensor. The headphone port uses a high-quality DAC.

My favorite feature, however, is Bluetooth support for the detachable keyboard. It just makes sense; when I’m working with a graphics tablet, I keep the keyboard off to the side. Bluetooth connectivity allows me place the keyboard in a more comfortable position when editing photos or taking notes.

It’s a good keyboard too. It has 1.4mm of key travel just like the Surface Pro, and while it isn’t quite as good as Microsoft’s offering – the keys feel slightly more wobbly – it gets pretty close. The same goes for the trackpad, which is pretty good but feels slightly sluggish compared to other Windows devices using Microsoft’s Precision drivers – almost like there’s input lag.

I like the matte black look. I think it errs a bit too much on the safe side, and I miss the Surface Pro’s colorful keyboards, but it’s certainly inoffensive from the outside.

There are some welcome aesthetic touches though. Open up the kickstand, and you’ll see a subtle pattern of Eve logos. I also love that Eve replaced the backspace text with an ‘Oops’ button. Some people are going to hate that, but to me it helps the device feel a little more personal.

Actually using the computer, I’m happy to report Eve nailed the display, which features 100 percent sRGB coverage and an ever so slightly higher resolution than the Surface Pro. It uses Sharp’s IGZO technology, and looks fantastic, perhaps even slightly better than Microsoft’s. My review unit did have a small amount of light bleeding near the bottom, but it was rarely noticeable.

The included pen feels a couple of generations behind Microsoft’s, but it supports the same technology as Microsoft’s Surface Pen, so upgrading is easy. Considering current Surface devices don’t even come with a stylus bundled in anymore, you’re still getting more for your money on the Eve.

The biggest disappointment in the Eve’s hardware was the speakers. Despite featuring touting its four-speak system (as opposed to two on the Surface), audio is rather tinny. Thankfully, there’s a solution.

I found that going into the Realtek Audio settings and choosing a different equalizer prodivded audio much more comparable to what I’d get from a Surface, perhaps even a little louder. It’s just kind of baffling that the default tuning is so poor, as most people won’t bother to tweak the audio settings.

None of Eve’s hardware choices would matter if the computer didn’t perform well, but thankfully it handles everyday tasks with applomb. I’m running the i7 Version with a 512GB SSD and 16 GB of RAM, and I don’t notice a performance difference compared to the 2017 Surface Pro I’ve regularly used with nearly the same specs.

That shouldn’t come as much of a surprise though. The Surface Pro does have a more powerful CPU (it uses a beefier 7th gen U series CPU compared to the Y series on the Eve). Still, the Y-series chips are able to come pretty close to their more powerful brethren for short bursts.

For reference, my review configuration on the Eve costs $1,599. A comparable Surface Pro costs $2,199, and that includes neither keyboard nor pen, which would bring up the cost another $260.

The biggest difference in performance is definitely in gaming: The Surface Pro’s Iris Pro graphics can actually get decent framerate at low settings, but the Eve V just has your average integrated graphics. Then again, you can connect an external graphics card to the Eve, so it really depends on how you plan to use your device.

Battery life has been impressive too. I find it just about matches my Surface Pro’s six to eight hours of real world usage, which is mostly involves Chrome, Photoshop, and Netflix. I was hoping for a bit more, considering the lower-power CPU and slightly larger battery, but it’s still one of the longest lasting tablets I’ve tested.

Besides, the fact that it charges with USB-C Power Delivery means the adapter doubles as a phone charger – very handy. Conversely, you can keep the tablet powered with your phone charger in a pinch, though it will charge slowly or not at all, depending on what you’re doing.

The Eve V is missing out on some of the Surface’s smaller refinement, and as a new company, we know little about the product’s reliability.

My first review unit had a misaligned magnet, meaning the keyboard wouldn’t stick to the screen reliably. The Verge experienced the same problem, as well as the light bleed I mentioned earlier. And though these were some of the first batch of devices, there’s an inherent risk to buying gadgets from a small, new company with an unproven record.

Then there’s the issue of actually buying it. At first, you could only buy it during flash sales, highly reminiscent of OnePlus’ early years. Now there’s just a super long wait. Eve basically assembles the computers to order, and currently, it’s website is showing over a month wait time.

Still, I can’t help but admire what Eve’s achieved. The computer’s components were largely chosen by bunch of random people on the internet, and it somehow turned out as one of the most well-though out devices in its category with an impressively low price tag.

It comes down to this: If I were to buy a convertible tablet right now, and didn’t have to worry about wait times or reliability, I’d pick the Eve V. Unfortunately, those conditions will be deal-breakers for some, but I’d still deem the Eve V a success story. It’s an easy recommendation if you’re willing to put up with the risk.

Here’s hoping that, like OnePlus, Eve can figure out a way to make it easier for customers to actually get their hands on one, and prove its reliability over time.