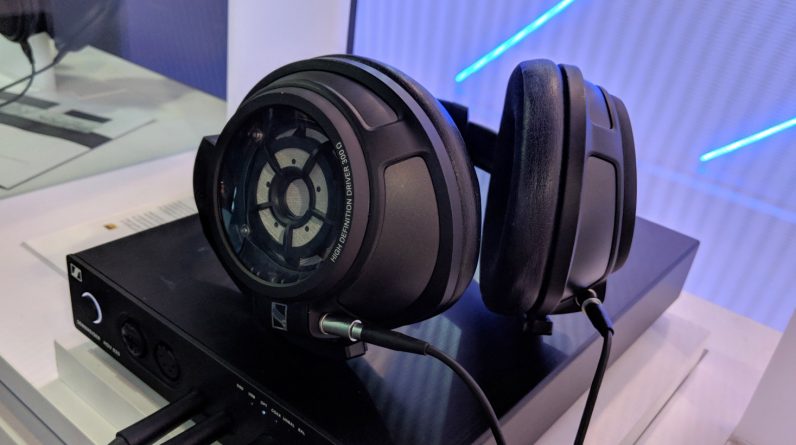 Few headphones are as venerable in the audiophile world as Sennheiser’s HD 800 and its younger, more refined sibling, the HD 800S. But despite their spectacularly transparent sound, there’s one particular quality that has dissuaded me from spending the money after all these years: The open-back design leaks sound in and out.

Enter the Sennheiser HD 820 – Sennheiser’s first premium closed-back headphones. I had the opportunity to test them for a solid 20 minutes or so at CES (I was totally hogging one of the two or three demo units). Disclaimer: they were playing pre-selected tracks out of Sennheiser’s own HDV820 amp (designed specifically to pair with the HD820) in a crowded CES hall.

All that being said, they’re something very close to my dream headphones.

I don’t say that lightly, considering there’s a surplus of excellent headphones at almost every price point. But from my brief testing, the HD 820 does precisely what it set out to do: create a closed-back HD 800 S without significantly sacrificing sound quality.

The first thing that stood out to me about the HD 820 was the remarkable sense of space. An expansive soundstage is one of the main reasons to choose an open-back headphone over a closed one, but listening to the 820, you can hardly tell they’re sealed. Though I wasn’t able to compare directly to one of the HD 800 models, the 820 seemed to be in the same ballpark in terms of spatial presentation from my recollection – which is to say some of the best I’ve heard. Like its predecessors, the 820 manage to put sound slightly in front of you, not just in your head. That’s a difficult feat for any headphone, let alone one with a closed back.

Gigantic earcups aside, Sennheiser says it was able to achieve this grand sense of space, thanks to a few clever engineering choices. The Gorilla Glass covering the drivers is curved to reflect stray sound waves waves into acoustic absorption chambers, reducing the resonances that give so many headphones that in your head feel. It also just looks cool.

That engineering wizardry leads to an impressively transparent sound with tight low bass, that kicks with finesse. The low end is certainly stronger than on the HD 800, and from my brief impressions, I much prefer the overall tonal balance. The low end was arguably the weakest part of its predecessors for bass-heavy genres (and really, most open-back headphones), so it’s nice to see that area improved on.

My only qualm, sound-wise, was that I noticed the HD 820 were more sensitive to a proper seal than its predecessors. That’s natural, considering the design, but perhaps exacerbated by the 820’s gigantic earcups. I was sporting some rather poofy hair, and I noticed I had to finagle with placement a bit to get the full low-end they were capable of.

That small caveat aside, at first glance, the Sennheisers HD820 are nearly everything I want out of a headphone. As much as I ultimately value sound quality over convenience, my open-back headphones get much less use compared to their sealed brethren. A noisy city like New York does not lend itself well to quiet listening sessions.

I’ll need to spend more time with the headphones before I can make any final judgements. But if Sennheiser could figure out a way to make these cans portable, I might never need to buy another pair of headphones again.