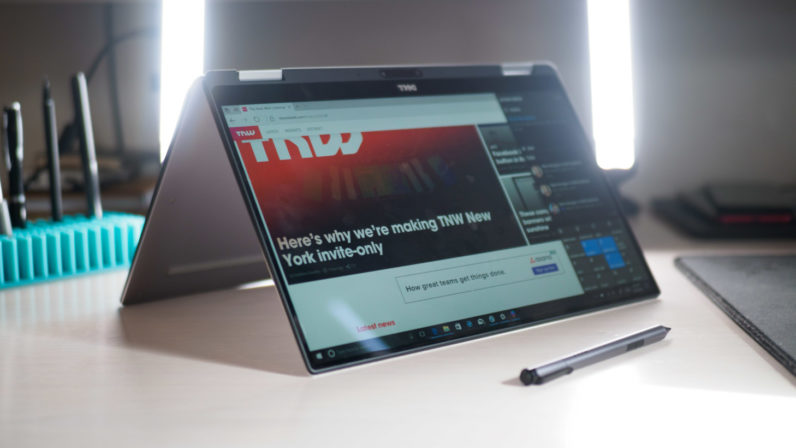 Dell’s XPS 13 has long been regarded as one of the best Windows laptops around – we said so much in our review. Since I’m one of those weirdos who prefers 2-in-1s to traditional laptops though, I was stoked when Dell announced it was giving the XPS 13 a convertible treatment. Still, I was a little concerned Dell might make too many sacrifices for the new form factor.

Thankfully, not much is lost in translation.

The XPS 13 2-in-1 uses the same design language as the traditional version, but it’s a little thinner and lighter (2.7 vs 2.9 lb). In making it so, Dell has removed the fans, opted for MicroSD over full size, and ditched HDMI and USB-A for a pair of Thunderbolt 3 USB-C ports.

That last change immediately makes it a less pragmatic device, but Dell at least includes a USB-C to A dongle in the box. In any case, USB-C is the future and I’m more than ready for USB-A to fade into nothingness.

The XPS 13’s selling point has always been the InfinityEdge display, and though other manufacturers have since copied the approach, I still love how it makes the screen seem to be floating in front of me. I tested the 1080p display, which isn’t quite as vibrant or sharp (obviously) as the 4K model, but colors and brightness were still pleasant and usable. It should also provide better battery life.

Unfortunately, the webcam is still under the display, giving videochat participants a full view of your nostrils. Can’t Dell source a camera small enough to fit in a 4mm bezel? LG nearly does it on its phones, and the top bezel on Huawei’s matebook is just a teensy bit thicker and fits a camera in there as well. At least the 2-in-1 configuration solves the problem by letting you flip over the screen, although you won’t be able to use the keyboard.

The other details hold up to the traditional XPS 13. The keyboard and trackpad feel nearly identical, which is to say pretty good and very good, respectively. The speakers are decent for the category, but recent laptops like Huawei’s Matebook and the Surface Laptop manage to fit much better speakers in a similar frame.

My biggest worry going into the review was performance. Dell is using lower powered Y-series chip instead of the U series on the XPS 13, but in practice, I couldn’t tell much of a difference in performance. The XPS 13 is able to ramp up clock speeds as needed, and I never ran into much thermal throttling or uncomfortable temperatures. Battery life netted me about 5-7 hours of real world use (Netflix, lots of Chrome tabs, and occasional Photoshop) which puts it firmly in the “good” category.

That said, keep in mind Dell’s traditional XPS 13 is just recieved an upgrade with Intel’s 8th-generation Kaby Lake R processors, which Dell claims can improve performance by up to 40 percent for some tasks. There’s no word on when the convertible will receive a similar upgrade. Still, unless you’re pulling very heavy workloads on the go, I wouldn’t discount the 2-in-1 just yet.

I also thought using it as a tablet might be uncomfortable because of the thin bezels, but I didn’t find it to be much of an issue. I generally just gripped the laptop from the side with the thick bezel, and never had much of a problem with accidental touches. Your mileage may vary.

The benefits of the 2-in-1 shape are subtle but welcome. It means being able to set the display closer to my eyes when watching a movie, making it feel like screen is larger. It means I can use the touch screen while cooking a recipe without getting crumbs on the keyboard. It means I could take the laptop to the gym and set it on the treadmill like a tablet.

It also gives you a reason to try Dell’s optional Active Pen stylus, which had minimal latency and accurate pressure sensitivity. I’m not much of an artist but it came in handy when editing photos in Lightroom of Photoshop – I just wish there were a place to put it.

The ultimate question is whether you should buy it instead of the traditional XPS 13, and that’s a matter of taste. Considering convertibles have been available for years, chances are you already know whether you care a bout having a flipping touchscreen. Pick the 2-in-1 and you lose a few ports and a little bit of power, but pick the traditional laptop and you miss out on the added versatility. Pick your poison.

Read next: Node CEO is the epitome of Silicon Valley’s ambition and talent