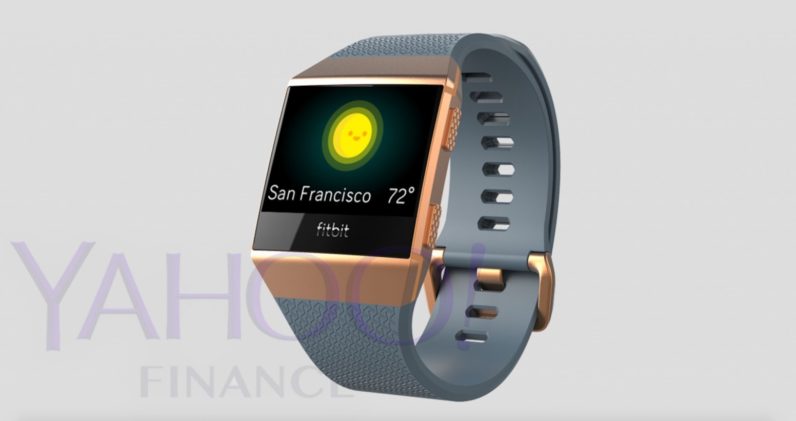 To no one’s surprise, Fitbit appears to be preparing its first proper smartwatch to take on the Apple Watch and Android Wear. We may have just gotten our first good look at the device, codenamed “Higgs,” thanks to leaked images obtained by Yahoo Finance.

The device looks… well, like a slimmer Fitbit Blaze. Then again, renders don’t always tell the full story – the Google Pixel looks much better in real life – but the report suggests the device was even divisive internally. I didn’t mind it overall – it looks kind of retro – but then I noticed that huge bottom bezel. Eesh.


If you were hoping the Fitbit would keep Pebble OS alive – Fitbit acquired Pebble in December – the photos aren’t very encouraging. Instead, it seems Fitbit is using Pebble’s talent to build its own custom OS.

Feature-wise, the device is rumored to pack heart-rate monitoring, touchless payments, GPS, Pandora music playback (what about other services?), and four days of battery life.

It’s also rumored to cost around $300. Fitbit dominates fitness wearables, but its going to have an uphill to get people to pay that much as a new player in the smartwatch space.

Then again, that’s not really saying much given the relatively lukewarm adoption of smartwatches in the first place. If Fitbit can really build a decent product with four days of battery life – the Achilles heel of smartwatches so far – it might have a fighting chance.


Perhaps more interesting are the rumored Bluetooth headphones, which would retail for $150. No word on if they have any fitness tracking features. They certainly don’t appear to have a heart-rate sensor like the Gear Icon X – something which could actually work really well – but there’s always a chance they’re a built in pedometer.

The devices are due out this fall – let’s hope they’re a bit more interesting whenever the official reveal happens.