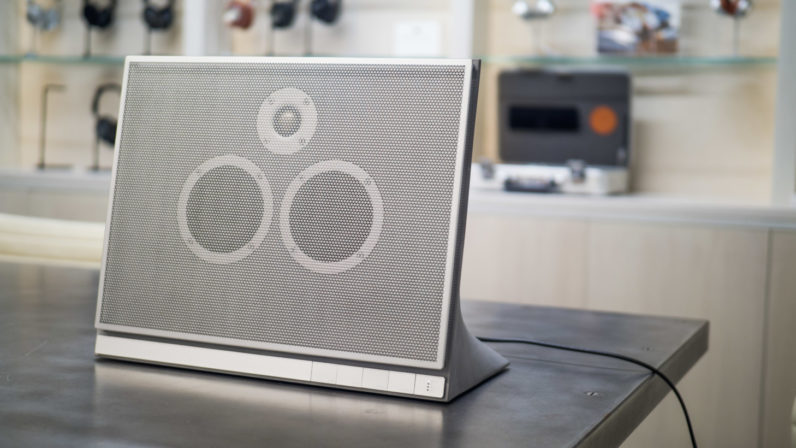 If you’re an audiophile at all invested in fancy headphones, chances are you’ve come across Master & Dynamic. The relatively young company hit the scene in 2013 and made waves by creating some of the most beautiful headphones around. Thankfully, they sounded just as good as they looked (check out our reviews of the MW60 and MW50 for more).

Now the company is bringing those design chops to its first wireless speaker, the MA770. The $1,800(!) speaker was designed in partnership with reknown architect Sir David Adjaye – known for his work with the Smithsonian Museum – and is literally made out of a swooping block of concrete.

More than just a quirky aesthetic choice, the concrete is meant to increase dampening and resonance – the company says the speaker can play at full volume without causing a table to vibrate. That should mitigate some of the annoying rattling caused by the low end of many speakers when not placed on an acoustically treated surface.

As you might expect, the speakers are quite heavy – 35 lb, in fact. They’re also larger than you would expect given the pair of 4-inch woofers, but the company tells me that it was looking to buck the trend of downsizing speakers as much as possible so you can hide them in a cabinet; the MA770 are a pair of speakers you want to show off.

While I didn’t quite play the speaker at its maximum volume for the safety of my ears, the speakers did sound great during my short listening session. The frequency response seemed to slightly emphasize the midrange – vocals in Janelle Monae’s ‘Primetime’ stood out with particular clarity. The 1.5-inch titanium tweeter lead to sparkly highs as cymbal’s crashed in the Dave Brubeck classic, ‘Take Five.’

Meanwhile, the low-end had a nice kick to it considering the driver size, though with less oomph in the sub-bass than I’d like for the price. Perhaps the MA770 is like the Sonos Play:5, which has significantly more bass presence when paired with another speaker. As Master & Dynamic isn’t providing frequency response information just yet, I’ll have to spend more time with it before drawing any final conclusions.

Speaking of pairing, the MA770 works via Google Cast, so you can stream music from your phone without worrying about your cheesy ringtone blasting through during a party. And in addition to creating a stereo pair, you can also use Google Cast to create a multi-room setup, even if your other speakers are from another brand.

Though I don’t can’t make any final conclusions from a few minutes of listening, it’s clear that at nearly two grand, the MA770 is not a bang-for-your buck device; you can certainly get a comparable acoustic experience for less. But it’s just so darn pretty – and I’ve certainly heard more expensive speakers that don’t sound as good.

Even moreso than its headphones, Master & Dynamic’s first foray into Wireless Speakers is a statement piece, a bit of beautiful artwork that happens to play music beautifully as well. It’s just up to you to decide whether that’s a worthwhile investment – the speaker is available for pre-order now directly from Master & Dynamic.