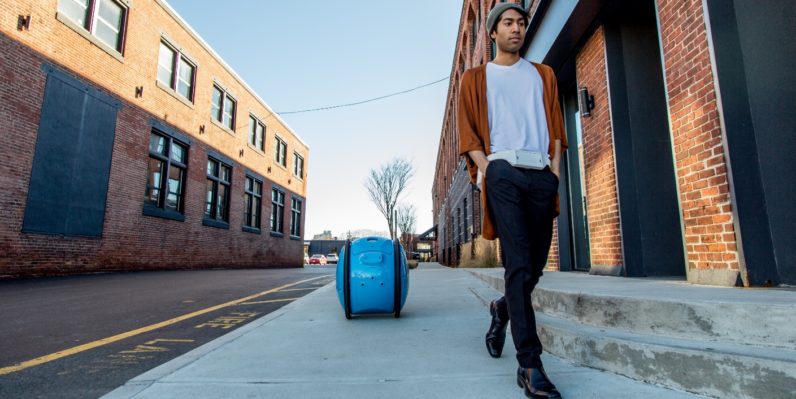 Say goodbye to bags, luggage, and purses – and hello to your own cargo ‘bot.

Piaggio – the company behind the Vespa scooter – created “Gita,” a ball-shaped blue robot whose name means “short journey.” Piaggio says that Gita rolls after its owner on two wheels at speeds up to 22 mph, and carries items up to 40 lbs.

Gita creates a map of its surroundings using a network of cameras and sensors on its round body. This allows it to navigate without supervision, and park itself in a safe spot once stopped.

It follows its owner thanks to an electric belt, but can also navigate limited distances on its own. This means you could, in theory, send Gita out by itself within a pre-mapped area to transport something.

If it sounds like Gita is a prime target for next-generation purse-snatchers, Piaggio has that covered too. It’s equipped with a fingerprint scanner and a code lock, as well as the aforementioned cameras.

Piaggio Fast Forward (PFF), a startup within the company, created Gita to allow humans to move more comfortably. “Think about how much more freely you would be able to move from one point to another if lugging cumbersome items was removed from the equation,” said PFF CEO Jeffrey Schnapp.

Gita will be available on a business-to-business basis in the near future.