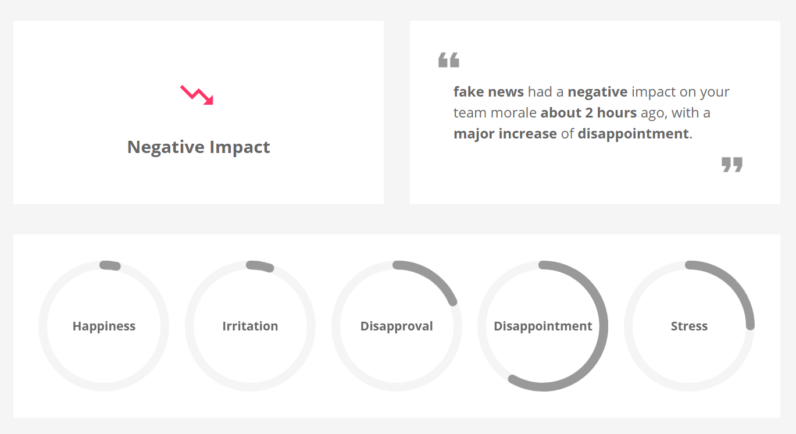 The Next Web has staff based all around the world. I’m based in Liverpool, in the North of England. My colleague Abhimanyu lives in India. Our main office is in Amsterdam, but we also have a smaller team in New York. Like many geographically distributed companies, we work through Slack – a popular, team-based instant messaging platform.

This has its advantages. For starters, it’s cheap. With channels, we’re able to have more focused discussions. And then there are things like Slack Calls, which are a beautiful and seamless way to have a face-to-face conversation. Something that you strangely miss when you work remotely.

But there’s a downside. So much of human communication is non-verbal. On Slack, there’s no body language to discern. The typical clues of whether someone is sad or angry just don’t come through.

Tokyo-based Vibe thinks that it has the answer to this. When you connect it to your Slack page, it sits as a passive observer, taking everything in. From that, it uses clever natural language processing algorithms to determine how people are really doing.

It looks at six different factors to make an overall judgment of morale. The two you want to max out are engagement and happiness. There are four other factors – namely disappointment, stress, irritation, and disapproval – that you’ll want to be as low as possible.

This is plotted out on a timeline which, as displayed below, allow you to track trends.

Both of these features are available in Vibe’s free plan, but they’re pretty useless without context. This is where Vibe’s premium features come in. For just $50 per month ($120 if you need to track more channels), Vibe will tell you specifically what triggered a spout of low morale.

And it’s actually pretty accurate. It accurately identified an increase in irritation and disappointment and a drop in happiness coinciding with the use of the word ‘tweet’.

This flurry of angry Slack posts was a result of SocialFlow – one of several tools TNW uses to manage our social media presence – screwing up.

But, like any sentiment-analysis algorithm, it’s not always 100 percent accurate. For example, Vibe suggested that discussion on Friday about fake news caused disappointment – one of the six factors it tracks – to soar.

But what it actually detected were my colleagues, Napier Lopez and Esther Cohen, signing off for the day immediately after Bryan Clark published a story about fake news.

Thankfully, Vibe lets you click through to where the conversation took place, allowing you to see the messages that precipitated the change in atmosphere.

Interestingly, the terms that signaled a boost in our happiness and engagement were ‘lol’ and ‘head check’. The latter is a term we use to signal that we want advice on how to make an article title more effective.

Given the increasing reliance on Slack, and the growth in remote or distributed teams, tools like Vibe are going to be increasingly crucial in the coming years. While I don’t believe it to be flawlessly accurate, it does provide a reliable insight into how your team are doing overall. As the traditional office setup continues its march to obsolescence, its these insights that HR departments and managers will depend upon.