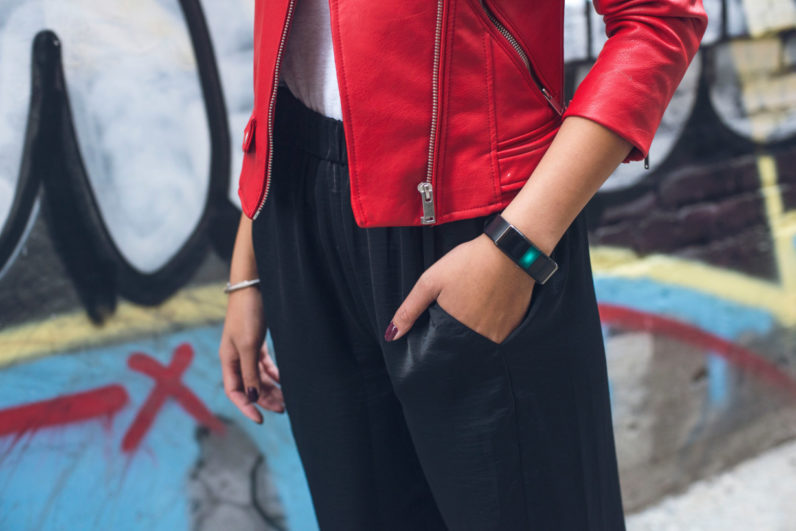 As a medium for consuming information – the time, news headlines, app notifications, that sort of thing – wrist-worn devices are awesome. But when it comes to actually doing shit, many fall flat on their faces.

Which is why the Nex Evolution from the Montreal-based Mighty Cast is so damn impressive.

Yes, it’s yet another wearable. Yes, at first glance, it looks pretty unremarkable — yet another black rectangle on a black strap. And yes, it does the usual wearable schtick — counting steps and showing alerts. As you might expect, it’s IP67 rated and has its own smartphone app, available for Android and iOS.

But take a closer look, and you’ll see that it’s no ordinary wearable. In fact, this is one of the most crazily customizable wearables around.

On the fascia, there are five hackable segments which can be used to do pretty much anything. Over a brief chat, MightyCast CEO Adam Adelman gave the example of configuring one to activate a ‘smart’ garage door opener, or to send an email with the user’s GPS co-ordinates to a pre-defined email address.

Each segment of the device can be given its own distinguishing color, with over 70 pre-defined palettes to choose from. And naturally, users can create their own palettes, to make their Nex Evolution truly unique.

“The idea is to democratize wearables and give control to the consumer,” Adelman explained. “It’s like a blank canvas on your wrist.”

Adelman was eager to stress the gaming credentials of the Nex Evolution. Mighty Cast has teamed up with Niantic to build a version specifically for players of Ingress – a mobile game not that dissimilar in spirit to Pokémon Go.

The Ingress version – called the Ingress Mod Band – will come skinned with Ingress visuals. It also lets you receive faction and team-specific notifications, and can be used to trigger specific Ingress related content.

The Nex Evolution will go on sale soon, with a pricetag of $79.99. You’ll be able to pick one up from the Mighty Cast store, as well as Amazon. As for the Ingress Mod Band, you can expect details on availability and pricing ‘soon’.