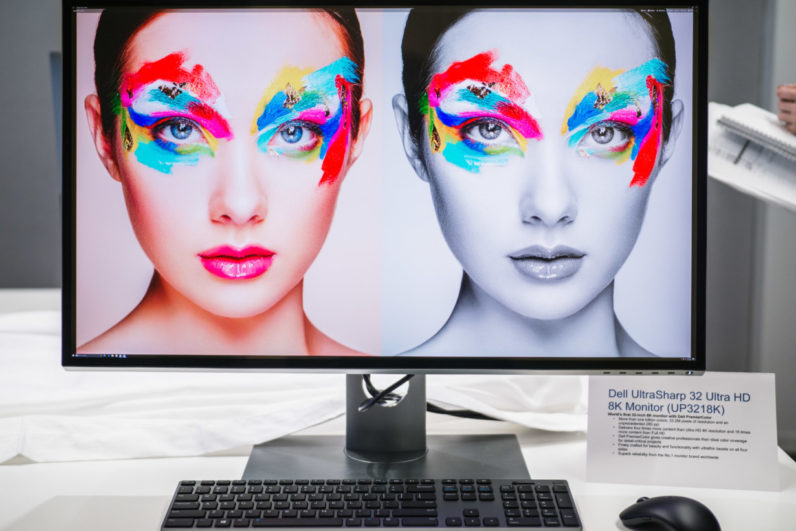 Most TV manufacturers may be content with 4K resolutions for now, but that doesn’t mean our monitor’s have to stay stuck there as well. Dell is upping the ante at CES with a stunning 8K display smoothly dubbed the ‘Ultrasharp 32 Ultra HD 8K Monitor,’ or ‘UP3218K’ for short.

Sure, you may think you don’t need an 8K monitor, but you’d probably be hard-pressed not to want one if you spent some time with it.

It’s one of the very first 8K displays out there, with four times the resolution of 4K, and 16 times that of Full HD. Here’s the spec rundown:

I’ve been using this monitor’s measly 4K predecessor, the UP3216Q, for a couple of months now, and the improvements were immediately apparent. Most immediately striking is the lack bezels for its size and resolution – Dell’s been leading the tiny bezel game for a while now, and it’s nice to see it bring the same aesthetic to its pro-oriented monitors too.

Then you notice the resolution; even if you stick your face right in front of the monitor pixels are quite hard to discern, and the improved colors with 98% of DCI-P3 coverage will please those working in media creation. For comparison, Apple’s 5K iMac is ‘only’ 218 ppi and the Surface Studio is 192 ppi, despite the smaller screens.

Both improvements make the photographer in me a little giddy, and the combination of resolution and color accuracy yield a bit of a wow factor. Some images almost look three-dimensional thanks to the extreme sharpness.

I just wish it came with some sort of native HDR support; even if 400 nits isn’t enough for a great VR experience, it could benefit from the added color information when watching video.

Anyone whose work relies on working with high resolution files or information-dense assets. As a photographer, it means that I no longer have to use software zoom in order to see pixel level detail. Instead I can just stick my face closer to the monitor, much in the same way I’d inspect a physical print or even a real object. It adds a degree of tangibility for high resolution images I’ve not experienced elsewhere.

You could also move into 8K gaming, but that seems excessive even for the most powerful graphics cards if you want to play modern games at full settings. But want to play an old game at 8K, or you’re running a Quad-Pascal Nvidia Titan? Sure why not.

The UP3218K will be launching later this year, for a whopping $4,999. This kind of beauty doesn’t come cheap.

Read next: Habit sends you meals based on your unique DNA profile